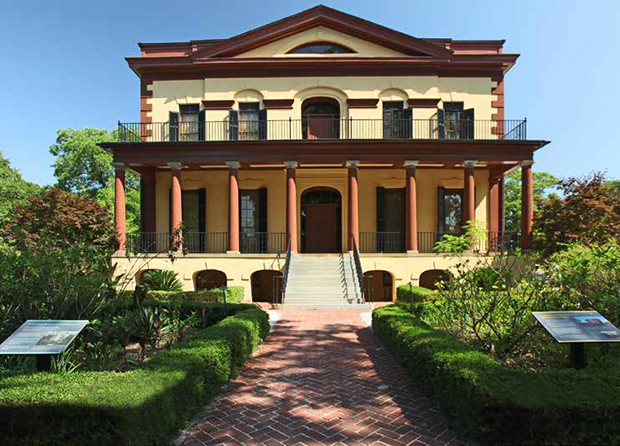 This is a story for the curious – those eager to discover more about the history of Columbia and the way people lived in the 1800s and beyond.  Some enjoyed an elegant lifestyle amidst almost unlimited resources.  Others struggled to achieve a bare existence.  All of their stories deserve to be shared.

The Hampton-Preston Mansion is one of Columbia’s oldest structures, built by merchant Ainsley Hall and his wife, Sarah, in 1818. Five years later, General Wade Hampton I purchased the house for his wife, Mary Cantey.  Owning further properties and enslaving about 3,000 people, Hampton was considered one of the wealthiest planters at the time of his death in 1835.

The mansion remained in the Hampton and Preston family for 50 years, eventually becoming the grandest residence in Columbia. During its antebellum heyday, Presidents Millard Fillmore and Franklin Pierce were visitors among other notables.

Following the Civil War, there were many owners who enjoyed the property and gardens. (And some who decimated both.)  It served as a convent, two colleges, (The College for Women and Chicora College) and eventually a tourist home.  The grandeur faded behind add-ons, subdivisions of the property, additional structures crowding the mansion, and general disrepair.

In 1969, the State of South Carolina purchased the property, rehabilitated the mansion, and opened the site to the public as a museum in 1970. Today, it is managed by Historic Columbia and available for tours, weddings, and other events.  During the antebellum period, the four-acre grounds were transformed by enslaved labor into regionally acclaimed gardens showcasing native varieties as well as plants from around the world.

The work continues for both the mansion and the grounds, always focusing on the design and framework of the antebellum era.

The work continues for both the mansion and the grounds, always focusing on the spirit and design of the antebellum era. A relatively new addition is the Boyd Foundation Horticultural Center, a greenhouse which will be used for the propagation of plants, research, and support the gardens and grounds.  This notable addition to the site was made possible by a generous donation from the Darnall W. and Susan F. Boyd Foundation, Inc. 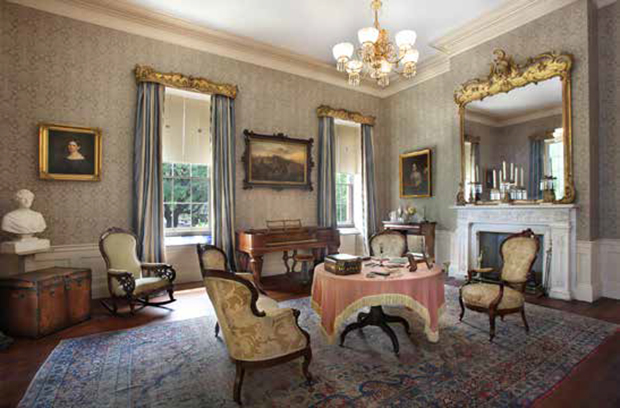 It is to the credit of Historic Columbia that the mansion you can visit today is not a snapshot in time, but rather a living house museum which beautifully portrays those who lived and worked there and what their world was like for more than 150 years.  Each room shares a different story, some quite surprising and all fascinating.

First the exterior.  Vibrant and inviting, the yellow ochre and earth brown scheme mimics a circa 1850 aesthetic the building formerly exuded. The steps are grand and imposing, reflecting what a visitor will soon see.  That we can see it at all is thanks to a group of Ursuline nuns who, after the Civil War and the mansion’s use as union headquarters for the occupiers, petitioned General William T. Sherman to use it as a convent.

But see it we can, beginning with the imposing entrance hall and curved staircase, surrounded by four main rooms on the first floor.  Furnishings have come from a variety of sources including the families, and other sources. Interior paint schemes and window coverings evoke the periods showcased, fashioned in 2000, when the mansion operated briefly as a designers showcase for the Women’s Symphony League.

John Sherrer, Director of Preservation, shared background stories uncovered from archives, diaries, histories, photographs, and his master’s thesis, written about the mansion.  “The archway was found in the attic and restored and repositioned into its original location,” he said.  “We were very lucky to find it as it yielded original paint samples that allowed us to determine how the interior changed aesthetically over several generations.”

Repairs have been made to be faithful to the house and times, using techniques which will last for years. He pointed out a recurring sun and moon motif stamped in wood going up the stairs.  “I hadn’t seen a decorative element exactly like this before,” Sherrer said.

All of the rooms on the first floor have 16-ft ceilings, good for cooling in summer months. The right front parlor is equestrian-themed and contains beautiful pieces, with paintings of family thoroughbreds on the walls. Among the other reminders of the family’s horseracing pastime is a silver pitcher, made by the Philadelphia-based firm of Bailey and Kitchen about 1840.  But images and accounts of enslaved jockeys included in the room’s interpretive panels reveal lesser-known aspects of the equestrian life so popular among the South’s planter-class elite.  Lives of enslaved workers and riders were difficult and often, painful, despite their best efforts and the glory they brought the family.

Through a door is the next room, a northeast parlor fashioned into a dining room.  Hand-painted murals mimic French block-printed wallpaper popularized by Zuber during the late-18th and early 19th centuries. The sideboard was made in Richland County around 1815.  The Sheraton-style dining table, also made in lower Richland County, features examples of the family’s Copeland Derby style china boasting hand-painted birds. “Some people considered South Carolina outside of Charleston to be backward, but that was not the case,” Sherrer said.  “As the capital city, antebellum Columbia was sophisticated in many ways, attracting talented artisans who rendered notable furnishings among other things.”

Wherever you look, the rooms feature wonderful pieces including a mirror in the western front parlor which is incredibly ornate ( and looks extremely heavy).  That room includes a bust of Sarah Buchanan (Buckie) Preston who was influential in Columbia and was friends with the Civil War Diarist Mary Boykin Chestnut. The wainscoting is charming.

The fourth downstairs room looks out over the rear yard. It features tiles from England and period furnishings as well.  A mantel clock is inscribed that it was sold in Columbia (but not necessarily made here). “The clock was made by artisans brought down to South Carolina from the North to avoid tariffs.  Its paper label – that of the Columbia store of Markham& Case – indicates it was sold here,” Sherrer said.

Like the downstairs, every upstairs room features a certain time period, with explanations to match. Throughout the house are signs and displays that speak of the time of the ‘Lost Cause,”  a narrative adopted during the Reconstruction Era by a majority of white southerners who viewed the "Old South" with nostalgia while ignoring the African American experience.   Also noted is Richard T. Greener, the first African-American professor at the University of South Carolina who served during Reconstruction, from 1873 through 1877.

One of Sherrer’s favorite rooms is furnished as a dormitory room representative of the female colleges that operated here for forty years.  Signage that reads, Preparing “Truly Educated Christian Womanly Women,” came from a yearbook from Chicora College, which used the site as its campus from 1915 until it was absorbed by Queens College in 1930.

Another room features suitcases and ephemera like that used by travelers who stayed at the tourist home that operated at the site from 1944 through the mid-1950s.  A copy of “The Green Book” – a guidebook for Black travelers during the 1930s through 1960s – provides another view of tourism and travel in the segregated South.

“Rather than making this building a snapshot in time, we used its rooms to portray various times and people, appropriate during its 200+ years of existence,” Sherrer said.  “That’s more true to the house and allows us to paint a broad portrait of some of the many facets of its existence.”

Behind the mansion is a sunken patio, which follows the footprint of a circa-1850 addition removed in 1969.  Popular for events, this unique amenity features a design that provides visual references to the former addition’s walls, windows, and fireplaces.

Around the mansion, the lovely grounds have been replanted with historically accurate species of trees, plants, and flowers.  “It was typical to have areas, like rooms, within the larger design,” Sherrer said.  Local artisan Chris Stuyck built both the site’s gatehouse and an intriguing gazebo.  Thanks to 3D scanning technology, the grounds feature a faithful cast-stone replica of the family’s original marble fountain by sculptor Hiram Powers.  There are benches, an array of flowers everywhere you turn, and beautiful mature trees casting cool shadows over the grounds.

Work continues inside and out, thanks to valuable support from donors like the Boyd Foundation and others, and the Hampton-Preston Mansion can be rented for weddings and other events, making quite a backdrop for memorable occasions.

Carefully curated and lovingly presented, it is a Columbia treasure that most of us have simply driven by on our way to somewhere far less historical, thoughtful, and worthy of our time. Visit soon.