The wedding of ABC Anchor Alicia Barnes and Columbia resident Jacob John, Jr. highlighted some of Columbia’s best assets in the midst of a remarkable love story. 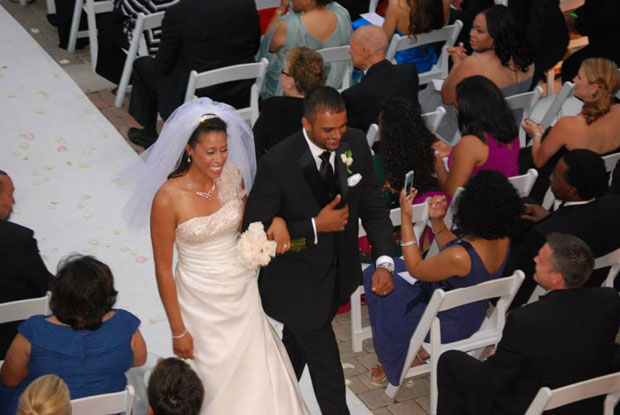 And so, in the kingdom of the three rivers, the beautiful princess found her handsome prince and together, with family and friends watching, they pledged their eternal love as the sun set and the breezes whispered across the water.

It is a fairy tale that’s come true, but it didn’t begin as a love story. “For years we were just friends,” Alicia explained. “Jacob asked me out several times, but as he said, I would always flake out on him. Finally, we did have that date, and another, and soon, we knew this was it.”

“For me, I really knew she was the one when I took her to Charlotte, to my sister’s house, and I saw how she was with my family – especially the little ones,” said Jacob.

“I love children and I was so comfortable with everyone,” Alicia laughed. “I think that day marked our first kiss.”

Events moved swiftly after that. Eight months after they started dating, he asked THE question. But, she had to work for it.

“I was sent on an Engagement Scavenger Hunt, beginning with candles, rose petals and soothing music at my home after I left work,” Alicia said. “A bottle of red wine, one glass, rose petals, and a note telling me to relax and get a good night’s sleep.”

The next morning, she was instructed to go to OCCO Skin Studio for a relaxing spa morning. Then, she was advised to drive to Charleston Place Hotel by Orient Express. When she arrived, Alicia was given keys to a suite, again decorated with wine and rose petals. Instructions kept coming: Wear a specific dress and meet her driver in the lobby. She did, the stranger drove her to the Battery, and there was Jacob. He dropped to one knee and proposed. She said yes. Their friend and photographer, Austin Page captured the moment, then off they went to Burwell’s Stone Fire Grill where both families and close friends were waiting. It was a magical proposal and an enchanting evening that turned into great fun and celebration afterwards. Jacob is clearly a master of organization, with a true romantic’s heart. It’s pretty much every girl’s dream come true.

Alicia Barnes is just as organized as Jacob. With meticulous attention to detail and intensive research, she and Jacob set the wheels in motion. The ring was a cushion-cut diamond. “Jacob is my cushion,” said Alicia. “I wanted a halo setting, because he is my angel.”

They began to scout out the Invitations, venue, food, planner, music, décor, pre-wedding celebrations, dress, every detail was symbolic. And although their ethnicity is different (he has an Indian heritage; hers is African-American), their cultural heritage is very similar. Both came from strong loving families and both families fell in love with their soon-to-be new additions. In homage to both families, they decided to blend Indian and Southern details into the celebration, specifically through food and dress.

The wedding dress was made locally by Kaitlyn Marie Machos, who was a runner up in the runaway runway competition the year Alicia was one of the judges. “I fell in love with her as a designer, and wanted her to be able to showcase her talents with my dress,” Alicia said, adding, “I enjoy working with professionals who are creative, local and trendsetters.”

The invitation was done with an old-fashioned letterpress, adorned with jewels and presented in a bronze box – distinctive, one-of-a-kind, fabulous.

The venue chosen was Coble Plaza … downtown, next to Edventure and overlooking the river. The wedding date was set: May 25 at 7pm. The sun would be setting and temperature should be perfect.

Jessica Rourke was tapped as wedding planner. Jacob and Alicia loved her sense of style and creativity. A gazebo was designed and built to match one the couple had seen and liked. She began work on plans to transform Coble Plaza into a fairytale setting with lights, billowing curtains and comfy sofas and chairs.

“We decided to mix things up with a fusion of Southern and Indian,” Alicia explained. “Scott Hall created a menu that was amazing such as curried chicken and honey and cardamom waffles with blackberry jalapeno sauce, fresh berries and figs, and pickled SC wild-caught shrimp on Sriracha and feta spiked Anson Mills Grit cakes with fried green tomato chutney. A full range of dishes insured all would be artistically, creatively and abundantly fed.

The signature mango cocktail was created just for this occasion.

The lead-up to the wedding would be filled with preparations that were celebrations in their own right, including:

Through all of the events and planning, Jacob and Alicia took a personal interest in the process. They enhanced and added their own good taste to the suggestions. They collaborated as if they’d been doing this for years. They looked out for one another and shared everything.

Family had traveled from everywhere. Friends from Columbia were there. Cars arrived and beautiful guests made their way past the wedding piñata, where they were asked to share a message, joke, or bit of advice for the newlyweds, who plan to break it open and read every note on their first anniversary.

The weather was cool, and the gazebo stood ready. Music prepared the guests for the ceremony, beginning with “Somewhere over the Rainbow,” soooooo fitting. The families were seated, and the bridal party entered to the sounds of “A Thousand Years,” by Christina Perri. The bridesmaids and some family members wore saris. (The sari is associated with grace and is widely regarded as a symbol of Indian culture. They are also flowing, ultra-feminine and drop-dead gorgeous.) Bishop Doyle Roberts, of the International Praise Church of God, officiated.

And then, to the music of John Legend’s “All of Me,” Alicia made her entrance, on her father’s arm. It was picture perfect, emotional, and everything a wedding should be.

The couple said their vows, joyfully and confidently, and in their first act as husband and wife, poured sand into a vase in their unity sand ceremony, accompanied by “I Wanna Love You Forever,” by Jessica Simpson. The symbolism of two individuals joining together by mixing the elements representing them, is poignant and lovely. The vase will be a treasured keepsake in their home forever.

And then the ceremony was over. The bridal party danced their way back down the aisle, to the music of “Happy,” by Pharrell Williams (and yes, we all clapped in rhythm). Alicia and Jacob followed and the party got started in earnest.

Scott Hall created a signature mango cocktail for the wedding that was as beautiful as it was delicious. As guests walked up the stairs, the sounds from violinist Brian McCollough filled the air. The breeze picked up, the guests mingled and the fabulous food appeared.

Soon the wedding party and bride and groom made their appearance, introduced by DJ Rick Smooth. They danced as the rain danced down on them. Soon, the party moved inside, next to the giant statue of Eddie, symbol of Edventure. Alicia changed into a magnificent red sari, again embracing her new husband’s background. (She should wear it on the evening news, although nobody would hear a word she said.)

The skies opened up, but it just added to the feel of the celebration. The wedding cupcakes had been made fresh that morning, courtesy Cupcake Down South. The party continued well into the night, and the foodtruck offered House made Tandoori lamb & beef meatballs in a soft bun, with pickled red onions and banana pepper chutney.

Everyone danced until it was time to leave. And when it was, the handsome prince and his new bride smiled and shared hugs all around as they left the party and began their new life together.

And, of course, we have no doubts at all … they will live happily ever after!