Where getting a loan is smooth sailing 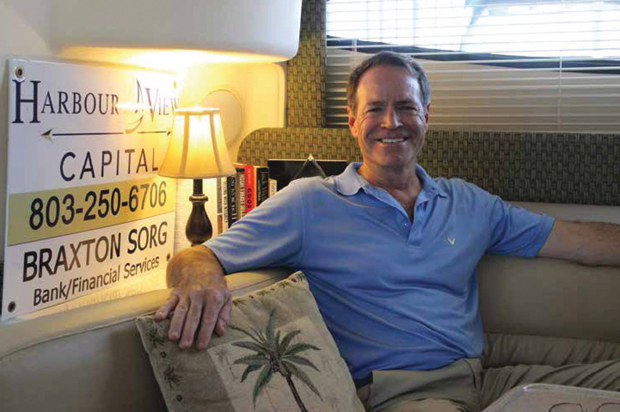 Waves can swamp a business or it can crest above them, according to Braxton Sorg, CEO of Harbour View Capital. Sorg is living his dream by plotting a very successful course through the worlds of finance and sailing by running his own finance company from an office in his fly bridge cabin cruiser, the “Inner Child,” on Lake Murray.

As unusual as that might be in a lender, Sorg has not only stayed afloat but has become very successful with that client-centered fiscal strategy. “With clients across 12 time zones, I am able to bring up to a billion dollars to the table and provide my small-business clients many types of loans.”

Leveraged corporate buyouts, franchise and aircraft loans are not always attractive to banks or credit unions, but Sorg facilitates those needs, as well as other endeavors that are sometimes considered too risky for corporate bank loan officers to consider.

“Private loans are flexible,” Sorg said. “I can help people who have credit scores in the 625-700 range – not because of a poor payment history, but because their focus has been on inventory or the purchase of land or buildings – all of which can temporarily make a credit score drop and the client look less ‘bankable’ to corporate lenders.”

He has loaned $60 million this year and has more than $700 million of loans in process currently, but being a successful entrepreneur came early in his life. As a boy of twelve, he built his own radio-controlled toys and needed funds for his projects. But his mother would not underwrite those costs, so she insisted he would have to get a job to pay for what he wanted. Instead of seeking odd jobs suitable for a young boy, Sorg bought a stake in his first business for $28 that consistently earned $800 a month. When he decided to sell that business years later, its purchaser was none other than his mother, who continued to run that same business for years.

As a Miami native, maritime pursuits were in Sorg’s soul. So in his mid- to late-teens in the 1970s, he earned money by racing sailboats and teaching scuba diving, which garnered $60K a year. After stints in the Air Force and college, he surrounded himself with mentors who were experts in business. “One of those was Dr. Allen Burkett, who taught me so much about finance that it became a passion, even though I was an engineering major.”

As much as he loved finance, Sorg’s career began in engineering. He worked on specialized machinery for a medical team that was researching a cure for non-Hodgkins lymphoma. He was recruited to come to Columbia to work for Shakespeare Fishing Corporation to engineer fishing reels and was the designer of the Barbie, one of the world’s most popular sets. And, as if he had listened to that tipster in the first frames of the iconic 60s classic, “The Graduate,” he also worked in “plastics!”

The lure of finance’s siren song finally drew him to shift career paths, and he became one of the top 20 financial planning associates in the nation for United American at the turn of the millennium and was recruited by New York Life. While Sorg enjoyed the time he spent advising others how to invest enough wealth for a secure retirement, he eventually compiled a lifetime of experience in and acumen for fiscal entrepreneurship, so he struck out on his own.

He formed his own S-Corp with an unusual twist. Instead of buying a staid landlocked office, he invested in a boat so he could return to the maritime roots of his youth. Now, Sorg sails through meetings with clients and the investors who can help make their dreams come true.

He welcomes business owners seeking funding to contact him, and reminds anyone seeking a private loan about three key points to assure a safe and beneficial transaction:

“You should pay for guidance, but don’t pay fees up front — wait until the deal has gone through; go slowly and ask a lot of questions – talk to the lenders themselves and know who is lending you money; and most importantly, once you have obtained the loan and payments are due, always make loan payments on time.”