Preventing Head and Neck Cancer Based in Knowledge 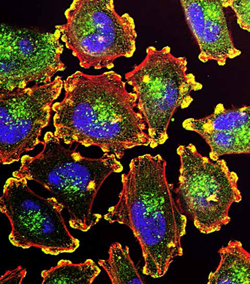 It’s an understatement to say there’s a lot that goes on in the head and neck region. Between eating, breathing, speech, swallowing, and use of four of the five senses, there isn’t a moment in which we don’t use our head and neck — which makes a cancer diagnosis in that area particularly striking. Medical professionals agree that the outlook for prevention of head and neck cancers, and treatment for those who endure it are better each year thanks to technological advances.


Head and neck cancer is a squamous cell carcinoma that can occur in the oral cavity, soft palate, parts of the voice box, and the whole area from the lips to the voice box. Some of these cancers can also spread to the nearby lymph nodes in the neck, including the salivary glands. Head and neck cancer does not include cancers of the brain, eyes, ears, or skin — it’s focused on occurrences in the aerodigestive tract. These cancers can seem quite different, but according to Dr. Kurt Meyers, a radiation oncologist with South Carolina Oncology Associates, these cancers are lumped together because most have similar patterns of behavior and similar treatments, usually chemotherapy or surgery.


Head and neck cancers often come from engaging in known behaviors. “We know the biggest risk factors are alcohol and tobacco,” said Dr. Woodrow Coker, a medical oncologist with South Carolina Oncology Associates. “Oral cancers at the base of the tongue and back of the throat are often associated with human papillomavirus (HPV), a sexually transmitted infection.”


Both doctors strongly recommend people within the age guidelines to receive the HPV vaccine should do so. “The HPV vaccine is essentially a cancer vaccine because it was originally intended to prevent cervical cancer, but it is reducing the rates of head and neck cancer as well,” said Dr. Coker.


Not all instances of head and neck cancer are caused by any one reason. Sometimes it occurs sporadically and without a cause that can be pinpointed. Regular dental checkups are an important part of prevention, said Dr. Meyer. “Dentists and hygienists should look and note anything in the mouth that is abnormal, such as lumps in the neck, red spots in the mouth, or a prolonged hoarseness.”


And of course, not using tobacco or alcohol products are the ultimate controllable prevention method. Even those who have used substances in the past can decrease their risk of head and neck cancers by quitting. “Over time, if someone has a long history of tobacco use, their risk begins to approximate the rest of the population after a few years,” says. Dr. Coker.


When it’s past time for prevention, treatment options for head and neck cancer include radiation, chemotherapy, surgery, or a combination. “Chemo plays a role if the cancer is advanced or in lymph nodes,” said Dr. Meyer. “The usual goal is to maximize the cure rate and minimize toxicities, as they all have their own side effects.”


Given the amount of daily functions that occur in the head, treatment can be a rough ordeal for patients who have head and neck cancer. Eating, chewing, hearing, smelling, swallowing, plus the potential for one’s voice and appearance to change are all issues when it comes to treating head and neck cancers. The treatments are very difficult unfortunately, and we follow people closely, Dr. Coker noted.

This intensive management process includes seeing an oncologist almost every other week, through a few weeks post-radiation. A followup PET scan is done to ensure there is no evidence of further disease, then the patient goes on to have follow-up appointments with their doctors and surgeon. The doctors agreed it can be a challenge for patients to maintain a normal life during treatment.


Once a patient is in the recovery phase of treatment, they are left to find a new normal. Head and neck cancer survivors often use a speech pathologist to help regain functions like eating, swallowing, and changes to how they speak. “It’s socially isolating [not being able to eat in public or speak like before], so there are high rates of depression,” said Erica Taylor, a speech-language pathologist at Prisma Health. “It can also be a very disfiguring cancer and it’s huge if your face changes.”


Taylor’s most common work as a speech pathologist involved rehabilitating people to learn to swallow and speak again, depending on the location of the cancer. The process can take more than a year, and that also is difficult for patients to endure.


This form of cancer can occur in people of any age but smoking and drinking alcohol are the two largest risk factors. Quitting these behaviors and being vaccinated for HPV are the best way to prevent getting head and neck cancer. The most important things to remember about head and neck cancers are that prevention is key, and that with treatment, many cases are cured. “It’s a rough few months and then patients are often back to normal life with minimal effort,” said Dr. Meyers.


In a separate box/section at the end of the story:

What these rare patients desire most is a voice.  Unfortunately, reimbursements for voice prostheses haven’t changed in nearly 40 years.  Many patients are forced to pay out-of-pocket for their prostheses and other supplies.  A select few insurance companies cover SC patients, but Medicaid currently does not (with exceptions).   For more information on how to help, call Travis Fraser at 770-312-1243.