Help for Your Heart 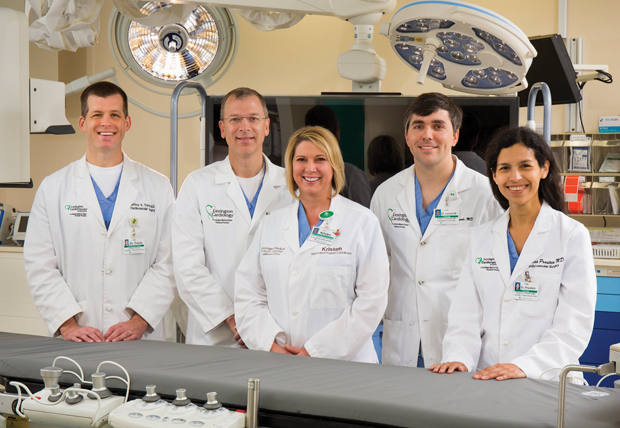 A growing number of cardiovascular patients at Lexington Medical Center will be able to have the aortic valve in their heart replaced without open heart surgery thanks to the expansion of a state-of-the-art procedure called transcatheter aortic valve replacement, known as TAVR. It’s considered one of the greatest advances in cardiology since coronary angioplasty.

“Undergoing TAVR is similar to a patient having a coronary artery stenting procedure,” said Robert Leonardi, MD, FACC, FSCAI, of Lexington Cardiology, a Lexington Medical Center physician practice. “It can be done without putting patients under general anesthesia and most will go home from the hospital the very next day with what we expect to be a very rapid recovery.”

While TAVR patients usually spend one night in the hospital and feel better in days, open heart surgery patients may be in the hospital for up to a week and full rehabilitation can take months.

TAVR treats aortic stenosis. Patients with severe aortic stenosis have a narrowed aortic valve that does not allow blood to flow efficiently. As the heart works harder to pump enough blood through the smaller opening in the valve, the heart eventually becomes weak. Over time, that can lead to life-threatening heart problems. Patients may feel out of breath, have chest discomfort or even experience fainting.

In addition, the hospital was part of an elite group of 20 hospitals across the United States participating in a National Institutes of Health study on “trans-caval” aortic valve replacement. Trans-caval aortic valve replacement allows doctors to replace the aortic valve with a catheter when arteries are blocked, by making a temporary connection from a vein in the leg to a large artery in the abdomen. Results of the study were recently published in the Journal of the American College of Cardiology.