This fine artist has turned a 100+ year old house into a beautiful downtown home. 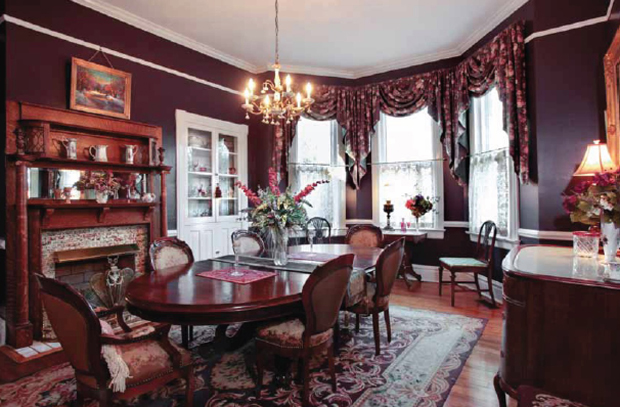 Creativity runs in the blood of Noelle Brault. She brings passion to everything she does, beginning with her personal artwork and continuing through her many pursuits. The loving care she’s shown to the home she shares with her husband Ed in Elmwood Park is clear evidence of their enthusiasm for Colonial Revival architecture.

Listed on the National Register of Historic Places, any description of the Brault residence would be remiss if the chronology of the home wasn’t included. By definition, Colonial Revival homes built in the first segment of construction, from the late 1800s until approximately 1945 and the end of World War II, are usually professionally designed with a center hallway and have interesting architectural details.

The lot in what would become Elmwood Park in Columbia was up for sale in the year 1905. Isadore Castle bought the raw land and paid it off by 1908. The home was completed sometime between 1909 and 1910, as it appeared for the first time in the Columbia City Directory in the latter year. The Castles were a Jewish family originating from Germany. It’s said the family had returned to Germany during the time either prior to or during World War II and needed the help of their American neighbors to finance their way home to South Carolina. They kissed the ground the instant they arrived back at their Park Street abode.

Isadore was a cigar manufacturer who worked on Main Street. He lived in his magnificent home until his death in 1955, with his family remaining there until 1965. The neighborhood was changing then, so it was converted into a duplex for a short while and in the early 1980s, it was returned once again to a single family structure. After a series of owners, the Braults bought it in 2002 from the couple who acquired it in 1988. Noelle and Ed moved from another house in Elmwood Park into the one she had her eye on all along.

“This house was one of the homes in the neighborhood that I always really liked,” Noelle said. “Once I saw the inside, I knew I wanted it. I just felt like I was at home.” Fortune smiles on those who act, so the Braults made a bold move. “We approached the owners before they put it on the market.”

Many features drew her to the two story from the turn of the century. “I like the high ceilings, the old mantels, the large backyard, and for a downtown neighborhood, the yard has very mature trees,” Noelle explained.

The rooms feel spacious, and with eleven foot ceilings, the openness is accentuated. There is no mistaking where you are, as each room is true to its heritage. A study in antiques, the furniture is a collection of Eastlake and Renaissance Revival. Furniture from the Renaissance Revival period (1850 – 1880) reflects an interpretation of previous century designs with dark woods, walnut veneers and architectural motifs.  Eastlake style furnishings (1870 – 1890) are more rectangular, yet are most often still in darker woods.  The Eastlake style has straighter legs and backs.

“For a while, our hobby was going out and antiquing and now we love collecting art. It used to be collecting antiques. The armed chair in the parlor is from a house in Charleston, which I find as interesting history,” Noelle shared.

Once you enter the home from the double set front door, you arrive in the parlor, surrounded by pink striped paper with a purple band above the picture molding. A center ceiling medallion and hanging chandelier with soft pink roses completes the look. “The lady before us did the color scheme,” Noelle said. “She did the wallpaper and the curtains and I did everything else. It looked soft and I liked it.”

The parlor’s fireplace was here originally as wood-burning, but has been updated to gas logs with a new tile surround, sourced from vendors in Brevard, North Carolina and online through E-Bay. “We just completed this tile project. We’ve wanted to go back to this look from the newer tiles that were installed before we moved in, so we got three different sets, one for each fireplace that was to be updated. Ed installed the tile from start to finish,” she said.

“We tried to keep with the period of the house,” Noelle confirmed. But, in some cases, it was a bit of a challenge. “Originally, with the arch between the parlor and the hallway, we received a bag of sticks and balls. The arch didn’t have anything in the middle.” Ed and Noelle worked to restore its former heart pine glory and produced a beautiful result.

A unique piece of stained glass sits in the transom at the front door, looking perfectly in place. “The stained glass throughout the house – we added all of it,” shared Ed. Sourced locally, from a vendor in Ridgeway, the stained glass is actually reclaimed from properties in the Northeast.

From the parlor, you look across to the living room, which is separated by the original seven panel pocket doors. “When you shut the doors, it makes it very cozy in there, especially if the fireplace is going,” she said. Details repeat in this room, including the picture and crown molding, and wavy glass windows.  Heart pine floors are found throughout the downstairs, finished with a gloss polyurethane for protection. Noelle mentioned, “Floors were refinished upstairs, but downstairs they were already in good shape.”

Moving into the dining room, you find yourself in the largest room in the house.

The fireplace has leaded glass on the mantel and the bay window floods the room with natural light. The strong eggplant color is striking. “I love having a large dining room! A lot of people can eat in here and for parties, there’s plenty of room to put food on the table and still walk around it,” she enthused. The built-in china cabinet is filled with an eclectic mix of fine china that aligns with the period pieces throughout the home.

Behind the dining room lies the butler’s pantry. It offers a perfect area for staging food and drink for events. Here, the Braults use the glass fronted shallow cabinets to feature cookbooks in an artistic display. “We added the window to increase the light in this room, which also serves as our laundry area. We also added the granite countertop to cover the area over the washer and dryer,” Noelle said.

The kitchen maintains its original footprint. White cabinets and black granite are framed by an apple green paper and subway tile. The parquet floor was installed sometime in the 1980s. Lobster festival prints decorate the perimeter, in a nod to Ed’s hometown in Maine.

The den was originally the back porch, which is apparent through the lower ceilings. “We did add this fireplace, in a style to match the original ones found throughout the house,” she explained. “This room is a weird shape. It’s rectangular, so we did two love seats that face one another and a TV cabinet in the corner.” But the favorite feature here is clearly the back door. Formerly the front door of a neighbor’s house the Braults traded two French doors to save this door from the scrap heap. It has beveled glass and a mail slot, making it a very unusual, but beautiful choice.

A new addition was created in 2006, which took the home from approximately 2650 square feet to a little under 3000 square feet. “My husband can do anything – he got assistance with framing the addition, but he did the rest,” Noelle said. With the extra space, they gained a sitting room, a full bath, an area for Noelle to work on her art and a second story porch, overlooking their manicured rear garden. “When we did the addition, we had to get a woodworker to mill trim so it would match the rest of the house.”

This couple’s genuine love of history created a true showplace in downtown Columbia.