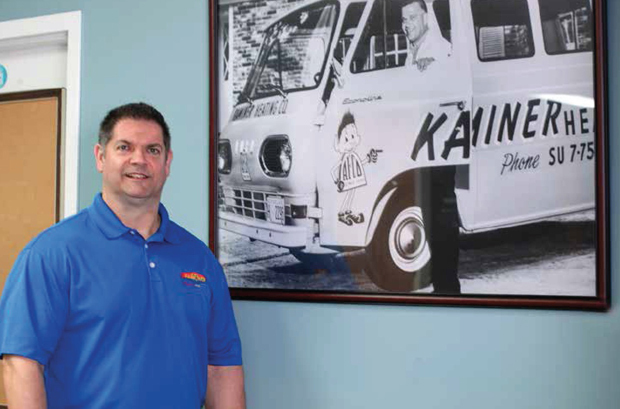 Things have changed quite a bit both technology-wise and in the world since 1956 when Erma and Harvey Kaminer first started their heating and air company with $100 and an old pick-up truck. Now in its third generation of ownership, Kaminer Heating and Air has evolved with the times and the technology that’s inside everyone’s HVAC units. Todd Kaminer, the third generation to lead the company, serves as the vice president.

Kaminer, who has five children and is a cancer survivor, enjoys spending time with his family and watching his kids play sports. In his younger days he didn’t necessarily plan to take over the family business, though he had been recruited to help out as a 13-years-old with onsite jobs that required the nimbleness of a kid.

“I had quite a few odds-and-ends jobs in my twenties, and moved to Charlotte for a while, where I met my wife,” Kaminer said. “We came back in 2007 to take over the business, and until then I didn’t realize that’s exactly what I wanted.”

After surviving cancer in 2009, Kaminer took to heart some lessons he learned during that time. “We had grown very fast a few years ago and there was more stress than revenue, so I decided to downsize and start over,” Kaminer said. “The culture of the company was being affected, and stress didn’t help the matter, so when it came to business, instead of stressing out, I learned to not.”

Other ways the company has shifted throughout the years that help the company culture is team the training team members go through that includes communications and personality assessments. Joining national heating and air contractor associations has also helped Kaminer lead the company in a positive direction. And speaking of positivity, the company is very focused on the reviews it receives through Yelp, Facebook, and Angie’s List and responds personally to every review, good or bad. “We had a client recently that was very impressed with our responses to those reviews,” Kaminer said.

Knowing your contractors is important, Kaminer advises. It’s important to choose a licensed company with up-to-date insurance policies, especially in South Carolina, which doesn’t require mechanical workers to be insured for liability, which puts the homeowner at risk if someone performing work on their home gets hurt on their property.

Most of the work that Kaminer’s team does on a daily basis is due to a lack of maintenance to the heating and air systems. With a regularly-scheduled system maintenance check, small issues can be caught early, saving homeowners and businesses a lot of money in repair costs or from having to replace a system too frequently. “It can save you up to 30 percent of heating and cooling costs,” Kaminer said. “Like anything else, costs have gone up and it is much more important to have them maintained.”

Heating and air systems are more advanced as technology has advanced too, involving more board and components than in the past. “The machines are much more technical today,” Kaminer said. “I see it going bluetooth before too long.”

As much as things in business change however, some things do stay the same, especially in the Kaminer Heating and Cooling office, one of them being Ms. Erma Kaminer, bookkeeper and an original founder of the company. Kaminer hopes that his children will be interested in following in the footsteps of the family to lead the business one day themselves since South Carolinians will always need to make sure their homes and offices stay cool.