Painter Laura Spong’s milestones provide the ballast that keeps her life’s ship on a steady course. 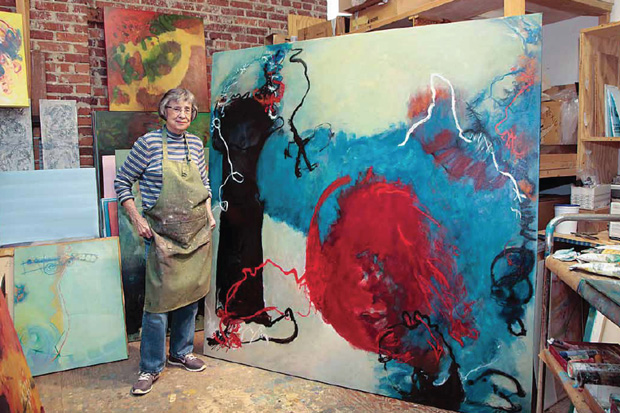 From her first two studio art classes at Vanderbilt University around the mid-40s, this Nashville, TN, English major knew art was what she wanted to do with her time, her life, her quickly-obvious talent. From the start of her painting career, her work received recognition, including awards. But her brushes went dry, sometimes for long stretches. Marriage, six children born in the span of a decade, and life as a widow – far too early – left little or no time for painting.

As soon as she could, she always returned to her easel and dipped the brushes back into the pigments that colored her life. By the late 50s, she was studying at the Columbia Museum of Art (then on Senate Street) with Gil Petroff and J. Bardin, and in the ‘60s also with Sig Abeles and William Halsey. When she reached an age at which many people retire, she became an artist full-time; a space at Vista Studios gave her talent a home. “I had never been around professional artists like this before,” Spong said. That was many exhibitions ago, many awards ago, and many sales ago – sales that frequently have sent her work into distinguished collections.

Down now is the sweeping recent exhibition, the most expansive she has ever mounted, an unprecedented Vista Studios event that stayed on view a full month and showcased paintings spanning much of her 60-year career as an artist. And that worked dually as a nod to her 90th birthday. As well as the birth date she shares with her twin sons.

In response to all three, her family was here to support her, one member flying in from London. Another son came forward with some of Spong’s very early work, pieces she was ready to jettison at one of her curves in the road, but this son talked her out of it and stored the canvases in a Fairfield County barn until the time was right to bring them out again.

The sheer number of paintings sold during February is indicative of the collectability that has come to characterize her work, which steadily has gained local and regional appreciation.

The Monday after her exhibition came down from the gallery walls at Vista Studios, she returned to Studio 9 as usual and began a week’s worth of painting, already looking ahead. Before she even approached her easel, she had set new goals.

Aside from producing new work for “Prima Vista: Fresh Art,” the Vista Studios’ theme for Artista Vista 2016, one goal had to do with perseverance and longevity. “We’ll do 100 if Wim holds up,” quipped the matriarch of Vista Studios.

Wim is Wim Roefs who, along with being the owner/gallerist of If Art on Lincoln Street in The Vista, is Spong’s representative; he has authored her catalogs and hung her shows, including the recent big one that coincided with and celebrated her milestone.

Another goal, actually a recommitment to one of her tried and true imperatives - staying true to herself in her art - also set off the beginning of her new decade. She has done, and can do representation work, but even in her early years of painting, it has been abstract images that streamed through her imagination and onto her surfaces. In describing her mature style, Roefs said the work “veered from the angular to the organic … her painting increasingly became more intricate, paintings with complex, more subtle compositions - in any conceivable pallet – in which large shapes and small scribbles and other marks interact with ease and tension.”

In his catalog essay commemorating her birthday, artist Mark Flowers described Spong’s works as “specific to vague,” and said her subtleties of space, their chaos and order, their movement of line reward the act of travel.” Flowers, who teaches painting at USC-Upstate, said Spong “speaks in the language of moment in a vocabulary that is strictly visual.

If vocabulary can be visual, maybe her English degree had a place in her art after all. Her colleague Kirkland Smith praised Spong’s ability to come up with just the right title for a painting or a show. As evidence that, in addition to her way with her brushes, she has a way with words, and that her phrases can be pithy, the nonagenarian entitled one of her past shows: “Age as An Administrative Device.”

Spong enjoyed her birthday surrounded by family and friends, and found her show rewarding in every way. Her sails are trimmed. She is back in Studio 6, painting. And charting new courses.