Let Me Call You Sweetheart

The Vista’s New Kaminsky’s is for Lovers 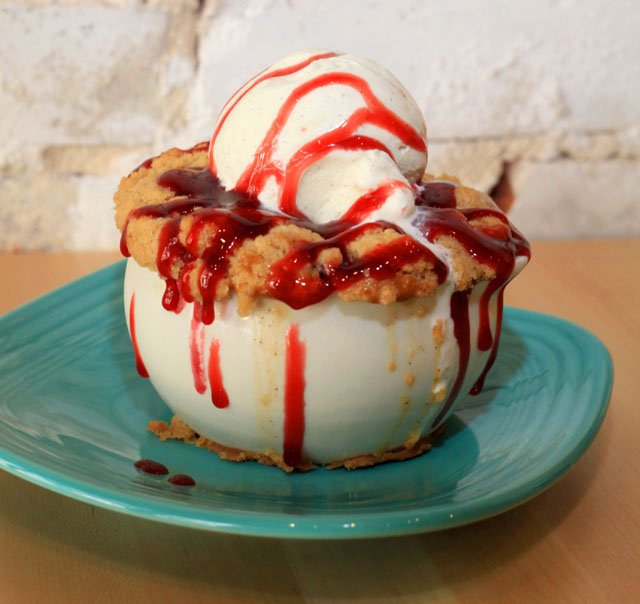 Since it opened earlier this year, Kaminsky’s Baking Company – an ideal spot to enjoy something sweet with your sweetheart – has earned an emphatically romantic reputation.

“We have been a hotbed for proposals,” said Mike Evans, Operating Partner of Kaminsky’s. “We have had four already this year.”

Under the watchful eye of Bacchus, the Roman god of wine (and the mischief that has been known to follow its ingestion), four hopeful souls have dropped to one knee in Kaminsky’s intent on betrothal.

Commitment could be Evans’s calling card. He has worked for the company that owns Kaminsky’s for his entire 12-year career. “My first job out of school was working at Kaminsky’s in Charleston as a bartender,” he said. Since then, Evans has gone on to manage Liberty Tap Room and now the new Kaminsky’s in Columbia’s historic Vista entertainment district.

Kaminsky’s is just what the doctor ordered for the lovelorn, or simply those with a sweet tooth. Nestled in a building erected in 1905, the space at one time operated as a pharmacy. In fact, while renovating the space, contractors found a number of vintage glass pharmacy bottles underneath the floor. Some are displayed behind the bar, including one for Bromo-Seltzer in its signature cobalt blue bottle. The vessels are fascinating relics of yesteryear as well as a collector’s dream.

In addition to a half dozen delectable menu standbys that include Tollhouse Pie, Bourbon Pecan Pie, and New York Cheesecake, Kaminsky’s offers something different every day, and it is all prepared onsite in the restaurant’s kitchen.

“Everything is seasonal,” said Pastry Chef Haley Miller, a Columbia native who began her calling at Blythewood High School’s culinary program. “It depends on what is fresh and on hand. … Around Thanksgiving, I want to concentrate on pies. At Christmas, I like to play with ingredients like peppermint and cranberries and other good stuff.”

Like a peacock flaunting its feathers, the display case at the front of Kaminsky’s beckons and woos, inviting dessert-lovers to find something irresistible within. Most gleefully succumb to its charms. The signature Red Velvet Cake is always a crowd-pleaser. Other temptations include layered white and chocolate cakes, Heath Bar, and Oreo cookie cakes, classic Key Lime Pie, cobblers, and several types of cheesecake.

Towering above the other scrumptious layer cakes visible under glass is the Hummingbird Cake, a banana and pineapple spice creation garnished w/pecans or walnuts and rich cream cheese frosting. While growing up, Chef Miller remembers watching her grandmother prepare all manner of baked delights, often for the faith community. “She mostly worked in church kitchens,” she said. “I spent a lot of time in kitchens with her.” Since Hummingbird Cake is ferociously popular at church socials, Miller’s childhood experience further enriches her approach to the Southern delicacy.

So what are Kaminsky’s top-sellers? “The cheesecake goes pretty quick, and people love the Hummingbird Cake,” Miller said. “We also sell a lot of sundaes.”

“Dessert is the main attraction,” Evans said. “It draws the crowd, and, once they are here, they realize they can have a libation.”

Indeed. In the evening hours, folks flock in for after-dinner spiked coffee drinks, teas, and ciders. Some opt for one of Kaminsky’s decadent dessert martinis, which come in flavors such as Kahlua Espresso, White Chocolate Raspberry Truffle, and Thin Mint. Not to be overlooked are myriad milkshakes, floats, and sundaes on the menu. Adventurous souls opt for adult milkshakes that run the flavor gamut from Bananas Foster to Dreamsicle.

The drink landscape has changed measurably since Evans was a bartender more than a decade ago. When the mini-bottle was abolished in 2005, bartenders could really go wild. “Free-pour opened up a lot of possibilities,” he said. “That’s when we started creating so many new adult beverages. Lots of people request the dessert martinis.” Happy Hour is Monday through Friday from 5-8 p.m.

Speaking of Happy Hour, Kaminsky’s is the first establishment in the state to offer wine on tap. Yes, you read that right. Developed in Napa Valley, California, wine on tap has taken a few years to catch on.

“Wineries are doing this because it is a greener way to bottle their product,” Evans explained. “There is no packaging, and everything is reusable.”

Under this scenario, wine is stored in steel kegs that generally hold the equivalent of 26 standard bottles of wine. A low-pressure system of inert gases such as nitrogen propel the wine through the tap. The process protects the wine from oxidation and keeps it fresh for weeks and even months. It is rapidly catching on because of its green benefits as well as the fact that the cost-effective process maintains the integrity and quality of even the finest wines. For those who want to sample this new-but-not-really-new concept, Kaminsky’s offers wine flights during Happy Hour.

While the heavy lifting of renovation is complete, Kaminsky’s is working to prepare additional space for banquets and private parties. Evans hopes that space will be available by the new year.

Kaminsky’s is right next door to its sister establishment, Pearlz Oyster Bar. The two are connected from the inside so patrons can stroll from one to the other via an uber-cool, rustic barn door.

“We always planned to connect Pearlz and Kaminsky’s,” Evans said. “It works great.”

If it’s true that oysters have aphrodisiac properties, the move could be absolute marketing genius. Just ask the happy couples who got engaged at Kaminsky’s.