The average person makes hundreds of decisions a day, of course none more important than deciding what’s for lunch. Luckily for you dear reader, we’ve compiled a list of several lunch spots that can satiate your hunger. While breakfast might be the most important meal of the day make lunch the most fun. 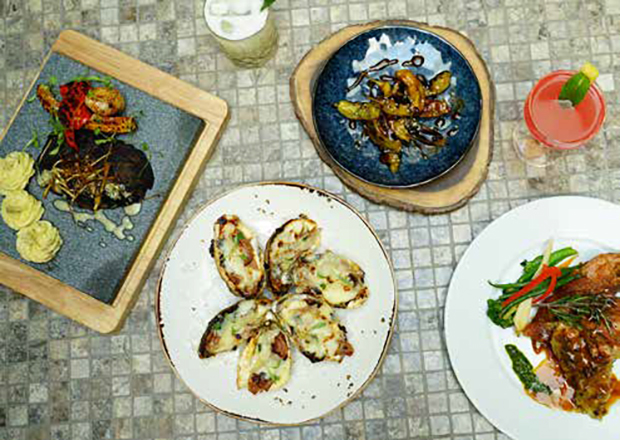 The Devine Cinnamon Roll Deli
thecinnamonrolldeli.com | 803-465-4947
This place is heaven for cinnamon lovers offering over eight types of cinnamon rolls ranging from the original to more adventurous flavors like Bourbon Caramel. Soon, they plan to roll out seasonal items so be on the lookout for their peach cobbler cinnamon roll. “It’s delicious. We cook down peaches with brown sugar, cinnamon, and other spices, and then we layer that on top of a cinnamon roll that’s covered with a streusel topping on top,” says owner Jody Kreush. The menu also features breakfast sandwiches and grit bowls served with a mini cinnamon roll on the side.

The Gourmet Shop
thegourmetshop.net | 803-799-3705
With charcuterie boards, salads, soups, and fresh paninis served on crispy oiled Italian ciabatta, there’s something for everyone at this Five Points favorite. The Gourmet Shop also does brunch every day offering several breakfast sandwiches and cocktails like their house made bloody mary mix, perfect for those who don’t have to go back to work afterwards. This summer, they will also start offering a one, one and one where customers can choose three different items which come with a French baguette.

Railroad BBQ
railroadbbqsc.com | 803-708-5801
"People seem to think that we do brisket better than most people in the city," says Kevin Gray, owner of Railroad BBQ. Railroad also offers pulled pork, chicken and ribs, and all meats are hickory smoked. With a railroad theme, every meal name is train related, like the Tubman for example which features all four of the restaurant’s main meats and is named after underground railroad conductor Harriet Tubman. To complement their meats Railroad BBQ offers traditional southern barbeque sides like mac & cheese, baked beans, cole slaw, and for those craving something sweet they even make a homemade banana pudding.

Steve’s Classic Burgers/Snow’s Ice Cream & Coffee Shop
stevesclassicburgers.com | 803-543-1823
Popular for their pound classic burger, every combo at Steve’s comes with fries and a drink. Owner Steven Vough said that what makes their burgers special is the preparation process. “The thing that sets us apart is we make a good burger,” says Vough. “By that I mean we take ground chuck, we season it with a quart of seasoning and other spices and then we let it sit overnight, and then we pat out our burgers the next day.” Steve’s also offers hotdogs and chicken sandwiches, and in the adjacent building Steve’s wife, Marilynn, runs Snow’s Ice Cream & Coffee.

No Name Deli
nonamedelisc.com | 803-252-0480
Another great place for deli lovers offering classics like Reubens, turkey clubs, and Greek salad, to name a few. No Name Deli also offers chili and vegetable soup daily in addition to a surprise soup of the day every day. For the tea enthusiast they brew four flavors with sweet, unsweet, peach, and raspberry. With a laid-back atmosphere and daily specials you never know what you’re going to get at No Name Deli, but you can rest assured that it will be delicious.

Smoked
smokedsc.com | 803-567-5599
Still fairly new to the Columbia scene and with unique dishes like the prime smoked burger made with a USDA Prime/A-5 wagyu ribeye blend, and small bites like lobster deviled eggs, Smoked offers items that you simply can’t get elsewhere. There’s also a microbrewery in house where you can order specialty beers and nitro coffees and soon, an exclusive membership opportunity where members will be allowed to enter the basement speakeasy called the Burnline and order rare bourbons and whiskies.

Coolie’s Island Jerk
cooliesislandjerk.com | 803-849-7999
A little taste of the Caribbean in your backyard, Coolie’s Island Jerk is a great place to go when you’re looking to shake things up. With an original jerk marinade Coolie’s does jerk chicken with a southern twist, while also offering many other traditional Caribbean dishes like oxtails, and curry goat, as well as vegan items like jerk tofu. With reggae music playing 24/7, Coolies isn’t just about the food, but the experience.

Midwood Smokehouse
midwoodsmokehouse.com | 803-764-1231
Known for Saint Louis style ribs which are cooked fresh every day in a custom rotisserie-style smoker, this is the place for those who don’t mind getting their hands a little dirty. Aside from ribs their brisket and burnt ends (caramelized cubes of brisket tossed in a Coca-Cola based barbeque sauce) are popular, too. Recently they’ve even started offering new dishes like their queso birriabecue, which is a barbecue spin on Mexican birria style tacos.

1801 Grille
1801grille.com | 803-777-1801
Offering sandwiches, steaks, pizzas, and more, it’s safe to say that this New American restaurant is certainly not one dimensional. Signature dishes at 1801 Grille include their apple and sweet fennel salad, the patty melt, and their shrimp and grits dish which features a creamy Cajun sauce. 1801 Grille also offers to-go ordering and curbside pickup, and if interested it’s recommended that you call and place your order in advance.

UpperCrust
uppercrustwoodfiredgrill.com | 803-888-6282
For pizza fanatics UpperCrust runs a special called 2 for Tuesday where you can get two 2 topping pizzas for $18. Even if Pizza isn’t your thing (said no one ever) there are plenty of other lunch options like salads, sandwiches and quesadillas. In recent years however UpperCrust has become notorious for their brunch offered on Saturdays and Sundays from 10am to 2pm, with dishes like their creme brulee french toast. Plan ahead Mother’s Day weekend and Father’s Day weekend.

The Blue Marlin
bluemarlincolumbia.com  | 803-799-3838
Open from 11:30 am to 2:30 pm for lunch Monday through Friday, The Blue Marlin has established itself as a fixture in the Columbia restaurant scene. With dishes like their award-winning shrimp and grits made with fresh Adluh grits, and their salmon charleston which features a salmon fillet topped with a shrimp and crab creme sauce, seafood lovers can delight in every bite.