From Farm to Wingard’s Produce Stand, and then to a beautifully presented table, it was a good night for all. 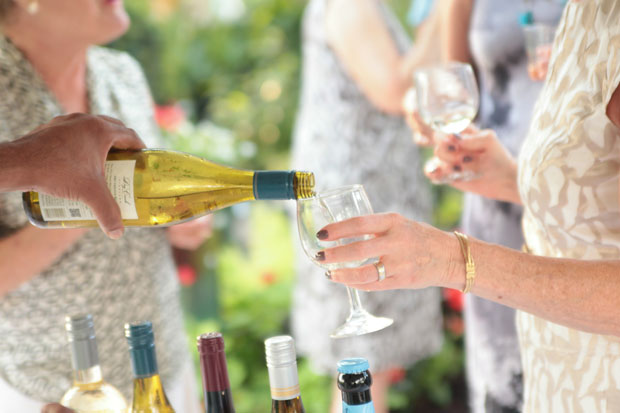 Wishing for a bit of breeze made it so, and hosts of the inaugural Farm to Table Dinner at Wingard’s Nursery and Garden Center in Lexington breathed a sigh of relief at the slightly cooler air and the welcome sight of rain clouds drifting away.

As the sun began setting on the year’s longest day, Summer Solstice, first guests began meandering toward the event site, through the lush plants and quivering trees lining the pathways. Musicians comprising the Simply Strings Quartet, who also perform with the Lake Murray Symphony, were tuning up their instruments just as Sandi Patel of Palmetto Wine and Spirits began popping corks on wines he’d paired to accompany each course of the gourmet meal, prepared solely from locally-grown sources.

Inside Wingard’s offices Chef Drew Thompson had commandeered the administrative work space as a food preparation staging area and was carefully skewering John’s Island cherry tomatoes with Wingard’s-grown basil and fresh mozzarella – the first appetizer to be served that evening. Along with trays of red, white and green kabobs, passed among guests, were trays of roasted vegetable brie quesos with pesto – the second appetizer, also featuring Wingard’s basil. The wine pairing for these two hors d’oeuvres was Napa Cellars Sauvignon Blanc from Napa Valley.

Next, clear glasses of gazpacho were served from trays, circulated by Wingard associates. Thompson, formerly of Everyday Gourmet in Lexington, spun the cold soup from locally-grown heirloom tomatoes, and Patel paired it with a California Chenin Blanc from Dry Creek.

Guests sipped, nibbled and chatted together as they sought out their places at the yards-long, white-clothed table that extended through much of the back garden. To mark each guest’s seat, Wingard’s event staff had written each guest’s name in calligraphy and attached the earth-brown card to a curl of burlap ribbon. Also marking each dinner seat, as a take-home favor, was a sample-size bottle of local honey, collected by Danny and Shelly Cannon at Lexington’s Bee Trail Farms. In addition to natural arrangements of seasonal flowers, Wingard associates Kathy Torres, Susie Long and Andrea Snelgrove along with Jordan Steinhauser, daughter of Wally and Delores Steinhauser, had strewn the table center with yellow and orange bell peppers and other locally-grown produce, all colorfully underscoring the evening’s theme – buy local, eat local.

Having that message resonate with guests was the shared inspiration of hosts Wally and Delores Wingard Steinhauser. “We had been thinking ahead to holding an event like this for a while as we have watched the roots of the national Farm to Table movement grow deeper and deeper,” co-owner Wally Steinhauser said. “People are increasingly interested in where their food comes from. It is heartening for us to recognize that more and more thoughtful eaters are taking very seriously the traditional, ecological and economic value of eating locally-sourced food. That trend, plus the fact that this site has a farm history of its own, led us to add our produce stand about a year ago. We wanted this event to officially celebrate the opening of the produce stand, which Mark Balser has grown so successfully now.”

Balser, who brought years of experience in the business sector to the establishment of this new feature at the garden center, said he is back in his element. “I was raised on a family farm in Hicksville, Ohio. On that farm, as in the business sector, a common and vital element was the cultivation of relationships – with suppliers and vendors, and now I have that relationship with growers. We are a marketing outlet for more than 30 local growers.”

Represented weekly in the baskets, bins and on the shelves of the produce stand are the seasonal harvests of those local growers; on the evening of the Farm to Table dinner, their bounty also was represented on the plates.

Balser, in his welcoming prelude to guests, revealed the source of every morsel.

Heirloom tomatoes for the gazpacho were grown by Derrick Gunter, and the wine paired with the cold soup was a California Chenin Blanc by Dry Creek.

An Italian wine, Louis Latour Pinot, accompanied the arranged green bean salad whose main ingredient came from Dale Miller Farms, another associate at the garden center. Miller is well-known in Lexington area schools for setting up growing programs so students can learn the science of nutrition and food preparation from the ground up.

Guests had been offered advance selection of their entrée: a basil, spinach and goat cheese-stuffed chicken breast, courtesy of Columbia Farms, or a roasted, stuffed South Carolina flounder with shitake mushrooms, corn and tomato ragout over creamed grits. Balser credited neighbors Mark and Ann at Keisler’s Mill in Gilbert for the stone-ground heirloom grits, and noted the couple also produces corn meal and polenta. “The asparagus on which the chicken breast was set had been grown on Fallaw Farms in Monetta. And the ragout showcased sweet corn kernels, cut from ears picked just up the road at Clayton Rawl Farms,” Balser said.” Patel’s California pairing - Ferrari Carano Chardonnay - worked equally well for either entrée.

Somehow, even after all that, guests managed to have room for dessert. Thompson whipped eggs gathered by Jennifer Holstein at Holstein’s Farms in neighboring Cameron to give lightness and height to his Lemon Berry Crème Cake with Fresh Blueberries and Cream. The blueberries had been picked by Tom and Nancy Harmon on their Gilbert farm, Harmony Hills. And to accent that delectable, towering cake slice, Patel chose Mionetto Moscato Frizzante, a sparking Italian wine.

As guests were cleaning their plates of every last blueberry, Balser introduced the first of two after-dinner speakers.

Clint Leach, assistant commissioner for external affairs and economic development with the South Carolina Department of Agriculture, reiterated why we all should buy local, explaining what impacts food prices. Leach spoke highly of the Certified South Carolina Grown program and how awareness that accompanies the Farm to Table movement can instill effective stewardship. “We look for ways to help farmers and farm leaders so that prices can be held down in order that consumers like us can come to events like this.”

Amanda McNulty, a Clemson Extension Agent and, praised consumers’ return to practices that characterized earlier times when consumers asked questions about produce and farmers took the time to answer. The host of SCETV’s “Making it Grow” echoed Leach’s praise of the Certified South Carolina Grown program, saying: “People want to stop and have a connection to something real,” adding: “This movement we are experiencing can become a matrix that can bring us back together.”

To exemplify her reference to earlier times, McNulty gestured gracefully to the Wingard matriarch, seated in a place of honor at the sprawling dinner table. Introduced earlier in the evening by her daughter, Delores Wingard Steinhauser, the woman affectionately known locally as Miss Margie still lives on a part of the farm site that had been cultivated by her late husband’s father. “Judson was born in this home,” Mrs. Wingard said, referencing the 100-year old farm house that now serves as the garden center’s gift shop. Mrs. Wingard had said, earlier in the evening, the dinner was by no means the first time food had been enjoyed on that site. “I remember us cutting watermelons, right about here.”

As the evening wound down and guests were saying their goodbyes, they were invited to stop by the porch and pick up a peach basket filled with samples representing all the growers and suppliers whose produce, honey, jellies and jams or pickles stock the produce stand. In addition to the farmers and vendors whose bounty was on the dinner plates, crops of many others are available seasonally at Wingard’s produce stand.

Departing guests asked if they could come back for next year’s Farm to Table dinner.

What’s New Under the Sun Isn’t New Around Here

Farm to Table dinners featured in glossy food or lifestyle magazines are the tip of a sprouting trend. What such lush photographs can’t show is all the hands that touched the process, strong and dirty hands that got those entrees and side items out of the fields and onto the plates.

In keeping with the trend, conscientious consumers now give careful thought to the sources of their food. Within a given community, the hybrid considerations are: ecology, economy, food and labor safety and fairness – and, naturally, taste.

In the 1980s the trend took root after the budding non-profit Slow Food organization, founded in Italy, began to succeed globally at counteracting the anonymity and homogeneity of fast food. Slow Food’s Snail Approval process recognizes restaurants, producers, purveyors, and artisans who contribute to the quality, authenticity, and sustainability of a community’s food supply.

In the heart of the Midlands, which still thumps to an agrarian beat, the momentum cannot truthfully be labeled a trend as Greater Columbians have always revered their food sources – although it may not have been as fashionable to do so as it now has become. For generations festivals celebrating seasonal local produce have kept high the awareness of crops – and their seasonal readiness. A recent addition to the harvesting line-up has been the Tasty Tomato Festival, held in mid-July.

Wingard’s Nursery and Garden Center may be one of the first in the area to host what the trend has christened a Farm to Table Dinner, but forebears ate straight from their gardens centuries ago, long before it was fancy.