Lynda O'Bryon At the Helm

She’s brought great gifts to Columbia and the state. In return, South Carolina has welcomed her with open arms. 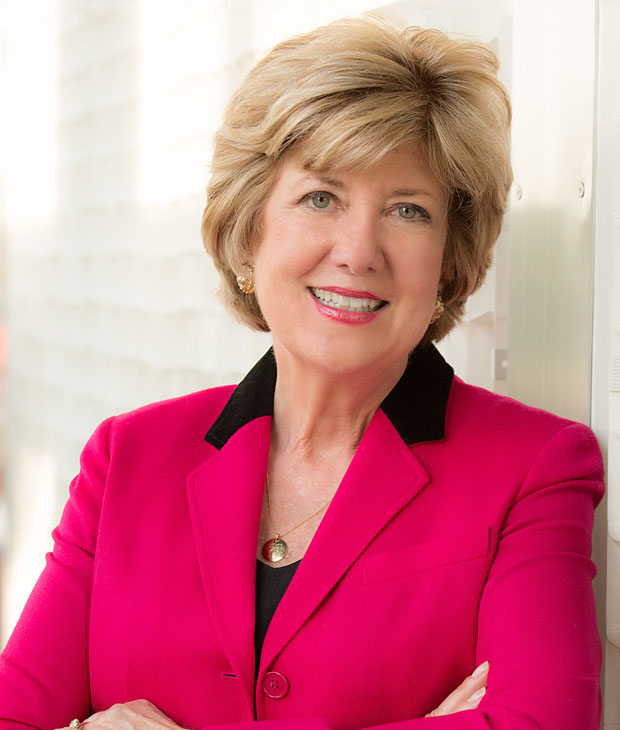 In 2010, when Linda O’Bryon made the decision to move to the Palmetto State, it wasn’t a complete shot in the dark. “I had knowledge of South Carolina ETV, in part because of the wonderful accomplishments and the influence this state had on educational television nationwide from the very beginning,” she shared. “ETV had done fine work nationally, serving not only the state but the entire country. It was very instrumental early on, especially through the Southern Educational Communications Association, which was formed in 1967 to create a regional voice and share resources to create more and better programs and influence national productions.”

Conversely, it was quite the achievement for ETV to attract O’Bryon, a multiple award-winner and highly respected journalist who was founding executive editor of “Nightly Business Report,” which is still aired nationally on PBS. Prior to coming to Columbia, she received a National Lifetime Achievement Emmy Award in Business and Financial Reporting from the National Academy of Television Arts and sciences. She was also recipient of the Distinguished Achievement Award from the Society of American Business Editors and Writers. She’s worked for public stations in Miami and San Francisco. Wherever she lives, she’s recognized as an influential and valuable contributor to her community.

And because her daughter had attended the College of Charleston, O’Bryon knew about the rich arts and culture to be found here. Ultimately, it was an easy decision. “Columbia is a city on the move in a major way,” she said. “There’s high-tech business here, and an environment that encourages innovation and achievement.” She finds it warm and welcoming, as well as open to women in leadership roles – all positives for this Washington, D.C. native.

During her four years in Columbia, she’s worked hard within our “encouraging” environment to bring about change. In 2010, ETV was facing strong challenges, including cuts in funding. Today, the organization has stabilized and branched out – and is back into growth mode. “We’re continuing to diversify our sources of revenue – changing our models into more of a public private partnership,” she said. “We’ve brought more services and programs to the state, including stronger educational programming, emergency services broadcasting, and deeper communications statewide.”

O’Bryon points to the superb slate of programs emanating from ETV. One of the many jewels is “A Chef’s Life,” the Peabody award-winning series that follows Chef Vivian Howard’s return to small-town North Carolina. Emphatically not another cooking show, this is nuanced, non-stereotypical storytelling that includes food culture and southern traditions.

“Expeditions” with Emmy Award winner Patrick McMillan is another treasure. The host’s enthusiasm is contagious and the wildlife and wilderness footage nothing short of amazing. At the end of each program, you’ll feel enriched by all you’ve seen and learned.

And on SCETV Radio, there’s “Song Travels” with Michael Feinstein – a show that’s been called “authentic and endearing,” as it presents witty and intelligent conversation with musicians including Johnny Mathis, Gloria Gaynor and Neil Sedaka, as well as relative newcomers Kate Davis and Hunter Hayes.

There are so many fine programs generated by ETV, and O’Bryon is quick to give credit to her colleagues. “We’re fortunate to have a great staff of producers, videographers – all the talented people who make these programs happen. By telling the stories of our region we’re sharing information and history, and building understanding.”

Through grants and other types of support, they’ve been able to create powerful documentaries such as “The Education of Harvey Gantt.” O’Bryon continued, “I must say I am proudest of the work we’ve done on Civil Rights. We brought in Civil Rights leaders from 40 years ago and Project Director Betsy Newman helped to bring this largely forgotten story back to life, generating new dialogue about the Civil Rights movement for a younger generation who didn’t live the story.”

O’Bryon says that at its core, education involves good storytelling as well as information sharing. During the past four years, she’s met countless individuals who shared their history of watching ETV in the classroom, and of gaining access to knowledge that wouldn’t have been available to them in their schools. Continuing and expanding education resources are parts of the master plan for the future, but that’s not all. They’ll also serve as the emergency services backbone for the state, and provide public safety training.

In terms of the world of work, ETV plans to feature more business news coverage on a statewide basis. They’ll provide more public affairs on television and radio and more transparency by covering state government more thoroughly – gavel to gavel. “In addition to government, we want to bring the stories of what is happening in business – and it’s fascinating, as manufacturing returns to the state,” she said, adding that innovative thinking, the technical colleges, and access are helping to create increased job opportunities for South Carolinians.

The list goes on, and O’Bryon is eager to share her enthusiastic outlook for the present and the future. She’s a cheerleader in the best sense of the word, encouraging, applauding and using ETV’s bully pulpit to tout its range of programming, from world-class entertainment on the level of “Downton Abbey,” to education for all ages (in and out of the classroom), to opening our eyes by opening the doors to the way our citizens live, the traditions we hold dear, and the goals we want to accomplish.

And when it’s time for a bit of leisure, her enthusiasm is just as strong. “I love the weather here, with our four seasons and beautiful climate. There’s a diversity of terrain which my husband and I find appealing, and in a couple of hours, we can be in such a variety of wonderful places – major cities, mountains, the ocean and more.” She has no trouble listing what she sees as many cultural and artistic positives, including Riverbanks Zoo, Edventure, the SC State Museum, Columbia Museum of Art and “so many more.” Her husband, Michael O’Bryon, is a professional photographer. “He’s really enjoyed capturing images within the state,” she said, pointing to a wall of incredible framed photographs of towns, byways, nature at play and other moments saved for eternity.

On her credenza are framed shots of business associates and dignitaries (Warren Buffett, former Governor Richard Riley), as well as family and friends. Images of her granddaughters are affectionately on display, no doubt taken by a doting grandfather with a very good photographer’s eye.

So what’s next, professionally and personally? “We’ve got more work to do, and a great plan to help us reach our goals,” she shared. “In four more years, we may look largely the same, but there will be more information, and people can receive it in a variety of ways. We’ll be more mobile, for sure, as well as more targeted and personalized in the programming we deliver. It is a very exciting time to be a part of this business.”

Personally, she’ll be as busy as ever, but always making time for family and exploring the area. “We have a home in Florida but we’ll always have a presence here in Columbia,” she said. “We’ve both become very fond of South Carolina, and our roots are growing deeper here with every passing year.”

Education
University of Miami – major in mass communications/journalism; minors in French and Economi

Awards
-National Lifetime Achievement Emmy Award in Business and Financial Reporting from the National Academy of Television Arts and Sciences (2009)
-Distinguished Achievement Award from the Society of American Business Editors and Writers (2004)
-Named one of the most influential women in the San Francisco Bay Area by SF Business Times. (2010)
-Columbia Regional Business Report Influential Women in Business: 2014 CEO winner.