Taking burgers and beverages to a whole new level. Gluten free? They have you covered. In the mood for adult dessert? Try a shaketail and thank us later. 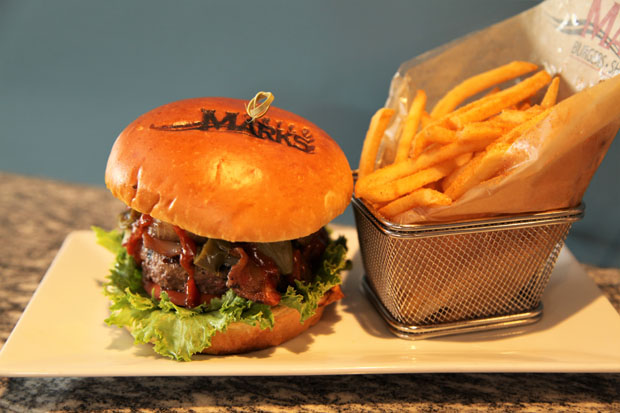 Some people have a beef with burgers – and who can blame them? Over the years, the great American burger has been flattened, fattened, covered with fake cheese or anointed with “special sauce.” Where can you get a really good burger these days?

In the Vista, that’s where. Tucked into the trendy, old-brick ambience of the space where the City Market used to be is Grill Marks, where they’ll make you a perfect burger to match your mood. Throw in a fun cocktail, a boozy milkshake, a glacially cold beer or some gluten-free sides, and you’ll be glad you’re sitting down, not driving through.

The owners – at North Carolina-based Larkin’s Restaurants – were thinking about a twist on the steakhouse experience when they opened the first Grill Marks on Greenville’s Main Street.

“We wanted something that was more approachable, but with the same quality of food,” said Bob Munnich, chief operating officer.

Following the success of the Greenville restaurant, which opened in 2012, the company ventured into the Vista. The space on Gervais Street was stripped down to the bare brick and dirt floors. Now it exudes that Vista vibe: industrial, yet warm and welcoming, with patio seating, a full bar, pub tables, booths, and TV screens that don’t ruin the conversation.

On a recent evening, the supper crowd ambled in and a couple of tables were set for graduation celebrations. Munnich, a chef who manages the two S.C. restaurants but also still enjoys manning a grill, was explaining what makes Grill Marks burgers different.

“It’s 100 percent Angus beef: chuck, short rib and brisket,” he said. “We experimented with all kinds of grinds. But what we ended up doing is chopping the beef. It has a different texture. It doesn’t get dry or tough.”

Every carnivore appreciates a juicy burger, but at Grill Marks, you’ll also have some fun with them. Consider these popular choices:

Burgers come on specially made brioche buns and range from $6.79 to $12.99. There’s also a Cobb salad, chicken corn chowder, and nonbeef options such as a Portobello “burger,” a grilled chicken and a turkey, bison or veggie burger.

Feel like dropping $22.99 and not having to eat again for quite a while? The Hot Mess might do the trick: a grilled cheese sandwich between beef patties, along with a grilled hot dog, chili, three kinds of cheese, Applewood smoked bacon, onion straws, fried pickle, lettuce and tomato.

Who knew gluten-free dishes would be such a big deal at a burger place? Munnich said that judging by online comments, about 1 in 10 Grill Marks customers is especially appreciative of the extensive gluten-free options.

This might make more sense if you’ve ever dined out with someone who has to avoid gluten. While you are pondering all the menu choices, they’re usually encountering frustration. Grill Marks founders were sensitive to the issue because of a family member who had to follow a gluten-free diet, Munnich said.

The solution: First, an array of gluten-free appetizers – not just yummy fried pickles, but a Portobello Napoleon, loaded nachos, a beefy version of poutine, fried green tomatoes and white truffle Parmesan chips. And you can order your burger with a gluten-free bun.

A sweet story: Munnich was eating out with his wife one evening, sipping a bourbon as she enjoyed a caramel shake. “Put some of that bourbon in here,” his wife said on a whim. Thus was born the boozy ice cream treat of your dreams, part milkshake and part cocktail.

The “shaketails” at Grill Marks start with a simple, fresh ice cream made on site with eggs, cream and Madagascar vanilla. What happens next can get a little crazy. Additions like Irish whiskey, or vanilla vodka plus Kahlua, or a highland oatmeal porter, or rum with coconut and roasted pineapple, make for some creamy concoctions that are strictly for grownups. Of course, you also order G-rated shakes with fresh fruit and other flavors. Or try something wackier like a chocolate-chili-bacon combination.

Mixologists at the bar can create craft cocktail specialties such as a blood orange Manhattan or a serene-looking sipper with blueberry vodka, lime and Curacao (the Blue Sky). Six beers are on tap, flowing through frozen fixtures that deliver a brew to cool off the most sweltering afternoon. The bar also rotates a selection of 10 mostly regional beers

The Greenville Grill Marks capitalized on the burgeoning popularity of the city’s Main Street – and Munnich believes the Vista restaurant, which opened in August 2015, is similarly well-positioned. Business has been growing steadily, with noteworthy boosts whenever the University of South Carolina’s sports teams are in town.

“Football season is great for us,” he said with a grin. “Especially when the Gamecocks win.”

Monday-Thursday 11am to 10pm

Friday-Saturday 11am to 11pm