This talented musician and teacher helps children learn more about music with an instrument many of us seldom see or hear. 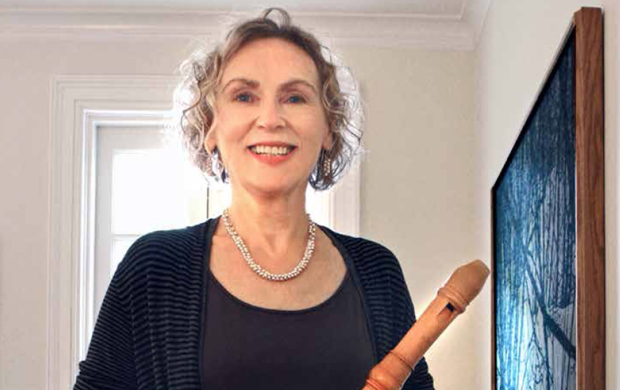 Before the concert this spring, the young girls clustered around their beloved teacher. Some towered over petite Mary Halverson Waldo, who despite her small stature is a commanding presence with ballerina-straight posture.

Uncharacteristically solemn, the mostly preteen students were awed by the grandeur of Trinity Cathedral where they would be performing in a musical program. The inner-city students from St. Lawrence Place, a Columbia housing site supported by the cathedral for families in transition, embraced their recorders, flute-like instruments dating back to the Middle Ages. After their performance, the students grinned, their parents beamed, the audience offered enthusiastic applause and their teacher and conductor gave a proud nod of approval with pride. The concert was the highlight of classes Waldo started during the winter.

She explained. “I began teaching recorder to a group of students connected with the ‘Homeless No More’ after-school program at St Lawrence Place. They were fascinated to discover how much attention to precision is required in playing simple melodies with a really good sound,” she recalled with a smile.

The students, ages 9 to 13, didn’t audition for the classes, but were chosen simply because they showed an interest, she said. “As a long-time Suzuki Method music teacher, my experience is that everyone has talent and this inborn talent simply needs to be nurtured.”

And nurturing her students is a hallmark of Waldo’s teaching philosophy. “Of course, work is always involved too. People learn in different ways and at different rates of speed, but everyone can learn,” she explained. The method is named for its Japanese founder, Dr. Shinichi Suzuki, who believed all people who have learned to speak their own language can also learn to express themselves through music.

The Suzuki movement is a worldwide network dedicated to making music education available to all children. The Suzuki Association of the Americas provides programs and services throughout North and South America. Waldo has been on the faculty of institutes and festivals sponsored by Suzuki Associations across the world.

Her twice weekly lessons at St. Lawrence Place were enhanced by honors music students at the University of South Carolina School of Music through its Communities in Harmony program for underserved situations. The after-school staff at St. Lawrence Place also had an important role. Before starting lessons, the St. Lawrence Place students and their parents were required to sign a covenant committing to attendance, practice, instrument care and mutual respect for all participants.

In praising her students, Waldo said, “I’ve seen delight, enthusiasm, hard work, dedication, the ability to listen, eagerness to help each other and pride as members of a team. These are invaluable life skills. Is it always easy? By no means.”

The students and their parents were pleased over the invitation to perform at Trinity alongside an intergenerational group of local recorder players. “It was wonderful to hear the beautiful results of hard work well done,” she said.

As a musician who has played and taught across the world, Waldo appreciates the value of being exposed to music at a young age. “I grew up surrounded by good music, from opera and chamber music to rock ‘n roll.” Her home state of Minnesota is known for its strong culture of choral singing. “My extended family includes music lovers, performers and arts patrons. Along with continuous performance opportunities from a young age, I’ve had a fascination with history and with the learning process,” she said.

Steeped in the genres of classical and romantic music, Waldo attended a Benedictine college where professors were uniquely dedicated to music of the baroque, renaissance and medieval eras.  “When it came time for graduate school, I chose to pursue a degree in Performance of Early Music at New England Conservatory of Music in Boston. This included studies in recorder, transverse flutes and other early winds along with historical dance and musicology,” she added.

Her decision proved to be destiny in more ways than one. “My husband and I met at NEC, and we have enjoyed many years of performing and teaching together in a variety of settings. We still find time to do concerts now and then, especially when it involves playing with colleagues and family members in the splendid acoustics of Trinity Episcopal Cathedral,” she said. The couple came to Columbia in 2010 after The Right Reverend Andrew Waldo was elected Eighth Bishop of the Diocese of Upper South Carolina. Before being ordained as a priest in 1989, Bishop Waldo was a performing musician, choral conductor and conservatory faculty member, specializing in renaissance and baroque music.

For the Waldos, music is a family affair. “Our three sons were involved in music throughout their school years, along with participating in church, sports and social activities. Church and music were the non-negotiables, and our job as parents was to help keep the inspiration alive. As adults they are all still making music, and one does it for a living,” she said.

Waldo was not exposed to the recorder, a woodwind with a 1,000-year history, in her earliest years as a music student. Instead, “Around age 14, I began playing it with family friends who enjoyed sharing a variety of chamber music and solo selections after dinner parties. Chopin piano nocturnes and art songs were followed by settings of beautiful 16th century chorale tunes on wooden recorder consorts. Also, our local Carnegie Library offered vinyl recordings of internationally known professional European recorder players,” she recalled.

She was captivated by the unique sound of the recorder as a pure, ancient voice from the past the first time she heard it played well. “Composers such as J.S. Bach often specified the use of the recorder to convey particular meanings—representing shepherds, angels, mortality, and even, as some have said, to convey the voice of God,” she explained.

Recorders range in size from as long as 10 feet to a very small six inches. They are featured in an abundant repertory of sophisticated art music, including compositions being written for it today all over the world, Waldo noted. “There are folks everywhere with old band and orchestra instruments gathering dust in their closets who, without opportunities to pursue them further, have turned instead to a rich and active community of fellow musicians who play recorders,” she said.

“Schools sometimes use plastic recorders for a brief time to teach basic musical skills in preparation for band instruments. But while the recorder appears at a glance to seem easy, it actually requires careful use of air, articulation, and fine-motor dexterity in order to make a beautiful sound,” the dedicated teacher and performer added.

Expanding educational opportunities and improving the lives of others are shared values for the Waldos. Bishop Waldo is recognized for his leadership in the South Carolina Bishops’ Public Education Initiative. It engages thousands of volunteers to serve as tutors and mentors in South Carolina public schools. It also works to establish higher and more equitable standards of education for all of the state’s children.

“Most Influential Teacher” of the first recorder student ever chosen as a Presidential Scholar in the Arts (Washington, D.C)

“The glory of God is humanity fully alive.” - Irenaeus