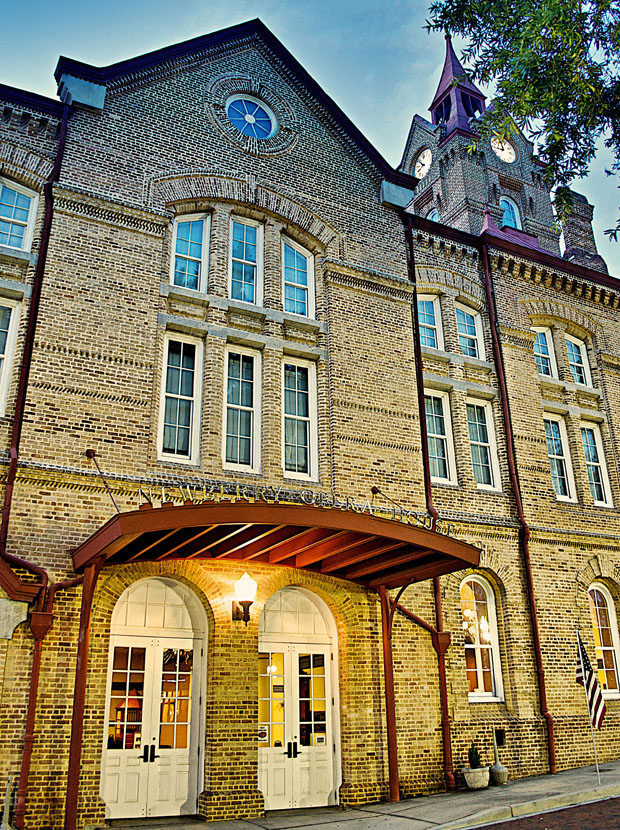 When retired dentist James Wiseman first sought to lure Deborah S. Smith to Newberry and the Newberry Opera House early in 1997 from a cherished fund raising position with the theater at Vermont’s prestigious Middlebury College, she turned him down.

Then in 1998 during a particularly cold Vermont winter, Wiseman, a Newberry native and resident, called again.

“It was really, really cold where I was,” Smith recalls.

“This time Dr. Wiseman said, ‘I have mint juleps and 65 degrees in South Carolina.” The promise of that oh-so- Southern adult beverage staple and the Palmetto State’s warmer climes led Smith to agree to – at least – come and visit.

Wiseman’s goal? To convince Smith that she was needed in Newberry and that she belonged there. Eventually he succeeded.

Wiseman called Smith in the late 1990s, but his efforts to renovate and preserve the Newberry Opera House date to the 1970s, he said. “When all the (textile) mills closed in South Carolina, that left us with nothing but history. The only thing we had remaining in downtown Newberry was the opera house. City hall was in it, and the upstairs was vacant,” Wiseman said.

First he tried to garner private funds to restore the opera house’s upstairs, but that effort didn’t go really well. Then in the 1990s, he was serving on the town’s city council and on the board of a local bank. The latter was talking about building a new main office and giving its old building to the city. “We conjured up the city to take the vacant building for city hall and that left the opera house vacant.

“I said to the council, ‘This thing is just sitting there. Why don’t you give it to a foundation? Well, I had to start that foundation. I had some friends who were experts in that area: a great lawyer friend of mine, a guy in construction and a woman who had just moved here. We got 15 people together and the city said it would give the opera house to the foundation for $1.”

Wiseman says he managed to pass on his passion for saving and restoring the opera house to the new foundation board. Then he wrote a letter to all his old high school classmates, discussing how they had grown up watching stuff in the old opera house. “But I told them this was really not about the opera house, it was about economic development.”

Today the Newberry Opera House draws customers from as far away as Charlotte and Augusta. Retired folks and other community advocates volunteer for all sorts of work at the opera house, acting as “ambassadors” for an amazing piece of South Carolina ingenuity and for enjoying a small former textile town that now boasts some of the best restaurants within 50 miles.

The Newberry Opera House, which presents more than 200 events annually, is an 1881 French Gothic structure. It was restored, reopening in 1998. Each year about 100,000 people come to Newberry – a town of about 11,000 – because of the opera house. New Year’s Eve – where revelers can purchase a package deal with dinner and champagne and then stay overnight at the local Hampton Inn – is popular. So are assorted other events. Smith’s years in theater and fundraising help her attract the likes of Wynona Ryder and Clint Black. “Maybe they’ll come on a Tuesday night, but they will come,” Smith says.

Other well-known names who’ve performed at the opera house since its reopening include: Kris Kristofferson, the Temptations, Joan Baez and the Oak Ridge Boys. In the coming year, there’s something going most weeknights and weekends. The 2014-2015 seasons’ line-ups boasts the likes of Ricky Skaggs and Kentucky Thunder, Jekyll and Hyde-Broadway, The Glenn Miller Orchestra, The Nutcracker Ballet, Crystal Gayle, The Buddy Holly Story, Arlo Guthrie & Alice’s 50th, The Atlanta Pops, Giselle-Russian National Ballet and the Official Blues Brothers Revue.

Sometimes, life at the Newberry Opera House is quite simply a gas. One recent Friday afternoon, the dulcet tones of The King
reverberated from the opera house’s center stage to the balcony. It was a full day of Elvis impersonators with multiple incarnations of Elvis from his Jail House Rock era to his Blue Hawaii days.

Looking back over the past 16 years, opera house executive director Deborah Smith still marvels at the confluence of factors including good luck and good judgment that brought her to Newberry. She grew up in Connecticut and spent most of her adult professional life in big cities.

“This was taking me way out of my comfort zone,” she says of moving to Newberry. She was amazed by the unflagging support of bankers, lawyers and politicians truly committed to finding a new way to put Newberry on the map. “A group of people who truly loved their town and wanted to see it expand and draw new people,” she says. “I decided this might be a wonderful experience. In a small town, you can develop so much.”

She points to the support of local bankers who have wrestled for approval of loans for new business and to the common ground quickly developed by business, civic and community leaders who wanted to see the Newberry Opera House succeed. Not only have business leaders worked together to bring in new industries and industrial parks, they’ve joined forces to be certain other ventures succeed. One of those partnerships led to the advent of a Hampton Inn in Newberry.

Tourists who set their sights on going to the opera house have lots of choices, Smith says. They can simply buy opera house tickets and enjoy unique live performances. They can explore Newberry through local arts offerings, the opera house and a good list of strong restaurants. Or they can dive deeply into local lore by reserving opera house seats, planning to spend the night at the Hampton Inn and checking out special offerings on restaurants/opera house combo packages.

James Kibler, who grew up in Newberry, loves his work as an opera house ambassador. ”It’s all the nice people we meet from out of town,” he says. “You almost end up feeling like family,”

Phil Ashwood, a retired geology professor from the University of South Carolina, really likes how the opera house supports the town and how it supports cultural outreach into area schools. Through a $500,000 grant from the Dufford Center for Cultural Diversity, the opera house has developed its own Dufford Cultural Diversity series. The opera house is partnering with Dufford to use artistic programming to promote awareness of diversity and to acquire a positive understanding of culture, ethnicity and social status. In addition to other efforts, the program brings grade school children from the Newberry area to opera house events, enriching the lives of young people who “would never have been here otherwise,” Ashwood says.

And that’s just the kind of creativity James Wiseman was hoping to foster. Back in the beginning, people told him Newberry would not support the opera house. That suited Wiseman just fine.

“I said, ‘I hope not.’ The idea is not to have Newberry clog up 400 seats,” Wiseman says. “It is to show off the town and bring in some financial stability.”