There’s a new headmaster in town. 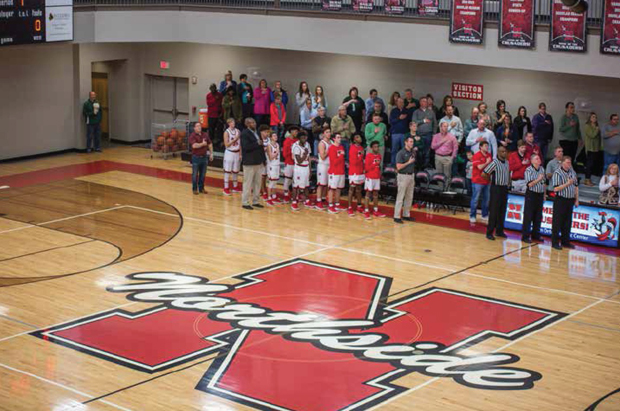 Pastor Scott Crede, the Administrative Pastor at Northside Baptist Church and Head of Schools at Northside Christian Academy, did not always know he would become a man of the cloth.

His bachelor’s degree was conferred by the University of South Carolina in business administration and he worked in that environment for a dozen or so years as the vice president and general manager of R.L. Bryan Printing Company before Crede felt the irresistible pull of the Bible’s creed and turned his life in the direction of Northside Baptist Church in West Columbia.

After being a member for some years, he “was called to his position as associate pastor,” and later rose to his current dual role in spiritual leadership, guiding his flock in worship of Jesus Christ.

However, there was still a void he felt needed to be filled, so along with academy co-founder Michelle Brewer, who is the lower school principal, they mapped out a structure for a school that would have Christ as its foundation.

Northside Christian Academy was conceptualized and voted on by the church in January of 2011 and opened the doors to its first students in September of that same year. Six years later, this preparatory academy – with an enrollment of students who range from birth through 12th grade – is one of the fastest-growing private schools in the state.

“We believe our educational mission is to prepare our students not only for college, but for life itself,” Crede said. “We ready them spiritually, educationally and physically to prepare them for the next step in their journey.”

Crede fervently believes they have a higher calling than just academic preparation.

“We instill in our students not only the desire to follow Jesus Christ, but to surrender their lives to Him,” Crede explained. “The two most important traits our teachers must have, in addition to proper teaching credentials, is a spiritual walk with Jesus Christ with a personal testimony, and they must also love children.

“Here we teach Christianity, but we love and accept anyone.” Crede believes so strongly in religious education that he continued his own walk with Christ via coursework through Luther Rice Seminary. “We have had students from most all denominations, and all are welcome here.”

According to Crede, students must perform a self-assessment of his or her relationship with Jesus Christ. Requirements for all students include Bible study, which includes a “challenge to apply the definitions of faith and truth in their examination of the Bible as God’s inerrant revelation.”

Science is a part of the curriculum, but for certain areas of hotly debated scientific study such as evolution, students are “pointed to Scripture as the ultimate authority and are encouraged to develop a biblical perspective about these topics.”

When asked about common behavioral issues, Crede’s answer was succinct: “We have no behavioral issues.” In online testimonials, parents remark about the benefit of “the love our children receive daily” small class sizes, daily Bible instruction and the “sweet spirit in the air of the school’s godly, not worldly, perspective when you enter the school.”

School staircases are adorned with movie-style posters cleverly employing a Biblical twist on comic book heroes, in which Superman (the Man of Steel) is replaced by Jesus (The Man of Heal); and once again, Jesus, as “Lord of the Kings,” overwrites the popular movie franchise, J.R.R. Tolkien’s “Lord of the Rings.”

The school’s enrollment is growing by double digits every year. Seven years ago, the church relocated from its original location in West Columbia to 85 acres of land at the intersection of 1-20 and Highway 378 and built a state-of-the-art 60,000 sq. ft. building. Two years later, they built a 46,000 sq. ft. addition. That main campus is filled with bright classrooms, administrative offices, gyms and multipurpose spaces.

“Students and staff eagerly await the final construction of our soon-to-be completed athletics fields on the new campus to round out vast opportunities for out-of-class pursuits. God blessed our church and school by giving us an additional location at 742 Kittiwake Drive in West Columbia.  We not only have the privilege to reach families for Jesus Christ in that community, but we can also serve them there through our Early Education Center,” said Crede.

Even with the infrastructure expansion and adding in optional costs of before-school and after-school care, Crede believes that Northside Christian Academy tuition is “lower than most” comparable schools, despite receiving no state funding.

The sports teams play other private religiously-affiliated schools, and judging from the awards on Crede’s bookcases, the Northside Christian Academy Crusaders excel in sports as well as academics. Crede would never wish to imply that they have a “very special” supporter, but he does circle back to the academy’s core value:

“Jesus Christ is the center of our school. There are other wonderful schools out there in addition to ours, but that’s who we are – the children, faculty and staff all look to Him for our answers.”