The discovery of a long-buried treasure provides ongoing blessings for many in the community. 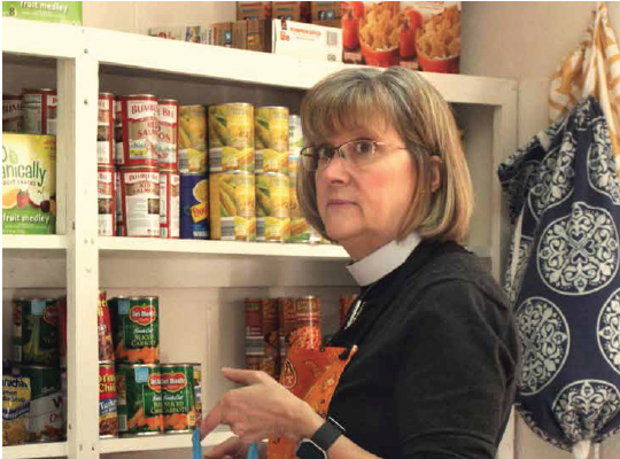 Long before being ordained, the Rev. Deacon Dianna Deaderick followed the Biblical mandate from Micah 6 to do justice and to love mercy. An Episcopal deacon in Columbia, the Michigan native grew up in Appalachia after her family moved to Tennessee. There, teaching in one of the nation’s poorest counties, the Berea College graduate witnessed great poverty where many lacked basic necessities.

Back then, Deaderick supplied warm clothes for children in cold weather; these days, she provides fresh laundry and clean showers for the homeless.

“I secretly provided socks and gloves for the students during the winter,” she recalled. “All the children were on free or reduced lunch and the average income per family was $2,000 a year made from tobacco crops. Many students had parents who could not read themselves and lived in homes without running water.”

Later, after moving to Lexington, S.C., when her husband, Doug, was transferred, her career in education flourished as a middle school teacher in Lexington School District One. Yet, as a devoted member of St. Alban’s Episcopal Church, she found herself increasingly drawn to a life in the ministry to serve the needy.

With a large homeless population within sight of the church, Deaderick knew that for many a fresh start in life can be as simple as having clean clothes, a warm shower and a friendly greeting.

That does not seem much to ask, but as the downtown Columbia parish discovered, there are scores of people who need just that, and not all of them are homeless. Many of them spend most of their meager earnings on basics like a boarding house room without even a hotplate.

Thanks to Deaderick’s inspiration and St. Luke’s support, hundreds are now lining up each week to get their laundry done by volunteers, while they are given the opportunity to take a shower and enjoy some warm fellowship.

The aptly named “Fresh Start” ministry takes place each week on Thursday and on two weekends a month. The church program is literally following the mandate from the New Testament’s Gospel according to Matthew to feed the hungry, clothe the needy and shelter the homeless, Deaderick says. Since opening in October 2016, more than 600 people have been served, averaging up to 80 people a day.

“I feel called to servant ministry,” Deaderick says. “I look to see God in all people. I also realize since starting this ministry that many families are only one paycheck away from homelessness.

At the outset, although the vision was there, hurdles had to be overcome before the doors could opened, requiring somewhat of a modern-day miracle to secure the necessary funds. The church gym, where Fresh Start would be located, had fallen into disrepair and renovations were required for laundry facilities, shower rooms and other services.

Then Providence smiled. In reading the history of the church, Deaderick learned that a fund existed that seemed to have St. Luke’s name on it. When a former parish disbanded and later merged with St. Luke’s, one of its endowment funds was transferred, in accordance with policy, to the Upper Diocese, where it continued to grow in value with accrued interest. Seek and you shall find. On inquiry, the Upper Diocese decided that because of the former congregation’s relationship with St. Luke’s, the available funds should indeed be granted to the church for use in making the repairs and starting the Fresh Start ministry.

These days, Deaderick is always there wearing her clerical collar, along with her husband, Doug, who wears a “Laundry as Liturgy” shirt given to him by Dianna. He’s a dedicated partner in the program as well as in marriage.

Along with meeting basic needs, the ministry provides a food pantry, health screenings, HIV/AIDS testing and other services. Since so many are homeless or nearly so, efforts are under way to secure affordable housing for as many as possible.

Speaking about the program, The Rt. Rev. W. Andrew Waldo, Bishop, The Episcopal Diocese of Upper South Carolina, said, “Seeing St. Luke’s reach out to tend their neighbors in the surrounding community fills me with joy. The people of this congregation are truly following the gospel through our shared diocesan mission of Making, Equipping and Sending Mature Disciples of Christ.”

The Rev. Jill Zook-Jones, interim rector at St. Luke’s, says, “Dianna is one of those rare persons who listen when God speaks. In Dianna, God found a woman of amazing compassion, boundless energy and an urgency to respond to the needs of those who are often forgotten. So, when God spoke to Dianna about beginning Fresh Start, she did more than listen - she acted.”

Zook-Jones and Deaderick are gratified that more clients are coming to Fresh Start each month. “More organizations are seeking to partner with us to expand our common reach into the homeless and working poor community,” Zook-Jones says. “In response, we formed the Fresh Start Board of Directors. The Board exists to lighten Dianna's administrative load and provide a solid foundation for continued expansion and fundraising. We are open to taking this ministry as far as God wants it to go.”

Fresh Start has received welcome contributions though a gift from South State Bank in honor of its board member, Columbia attorney Luther Battiste; Trinity Cathedral; The Episcopal Diocese of Upper South Carolina; the Dubois family; and corporate, foundation, individual and other support. Midlands Technical College plays has an important role by sending student interns to serve as volunteers.

With some basic needs now being addressed, Deaderick has her eye on future goals. “We have clients who live in boarding houses that need crockpots so they can prepare simple meals from the food we give them. We always need beds for those we assist in finding housing. I would estimate that 70 percent of our clients would be classified as working poor and the remaining 30 percent are homeless,” she notes.

“I believe the next step would be to acquire a house near St. Luke’s for people on a limited income. Affordable housing is such a desperate need. I would love eventually to have several small houses. With volunteers, we could refurnish them and establish a community that could support each other. I can see tutoring for their children, job skills training for the adults, parenting classes, the possibilities are endless,” she says.

As for now, she and Doug reflect on the satisfactions each day brings. On one memorable occasion, a fresh suit of clothes boosted the morale of an ultimately successful job seeker. The HIV testing program has been able to get clients the care they need; victims of domestic violence have been rescued; vital dental care has been provided; and affordable housing has been acquired for others.

“This ministry has brought us joy of the deepest kind,” she says. “I find joy filling the soap dispensers in the showers each week because I know that I have helped in allowing someone to feel refreshed. I find joy dancing with wheelchair-bound William and looking at the toothless smile on his face. I find joy when I get a client into care who has been diagnosed as HIV-positive. I find joy when I'm told by Solomon that I'm the first white person he has ever trusted and I'll always be his girl. I find joy when I hear ‘I love you, Miss Dianna,’ as I pull into the St. Luke's parking lot.”