The view adds the ambiance, but the food and drink play starring roles.

By CECILE S. HOLMES  Photos by Rob and Jon Photography 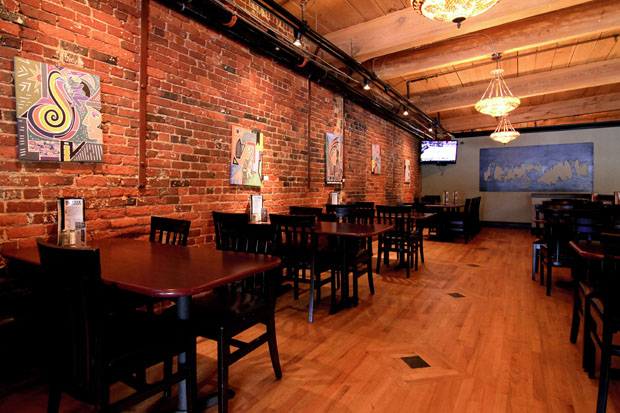 Tucked just a little ways from Lexington’s busy downtown is a food and beverage oasis with just the right mix of downhome casual and uptown class. Old Mill Brewpub at 711 East Main St. romances the foodies and beckons the beer lovers among us. Even better, come springtime, its porch proffers a nice spot to sit, sip coffee and simply stare out at the small pond behind the restaurant.

The demographics of its patrons are as diverse as its dishes. There’s live music from country to reggae Thursday-Saturdays nights, and you’ll see folks wander in clad in shorts and T-shirts and other casual wear. Yet the Old Mill’s popular business in private parties tends to draw a dressier clientele. Restaurant workers recount even seeing women come in decked out in evening dresses.

Old Mill pulls in families looking for a quick bite, older patrons who don’t want to drive all the way into Columbia and a regular music-and-food -loving crowd that varies in age. Though there’s a local micro-brewery on site, food really stars here.

O.K. I admit it, even though, I’m not much of a meat lover, the Old Mill Burger –8 ounces of ground beef topped with Pimiento cheese, fried green tomatoes, Applewood smoked bacon and pepper gravy -- is pretty darn good. You might start, however, with an appetizer such as fresh-based crostini topped with homemade fig jam, goat cheese, prosciutto and white balsamic glaze. Or maybe a crab pretzel – a large soft pretzel covered in Old Mill crab dip and Parmesan cheese and toasted to a golden brown. Or red pepper made-from-scratch hummus served with pita points.

There are as many choices among entrees and sandwiches as with the appetizers. There’s the ever popular Brewpub Shrimp and Grits, a lovely concoction of shrimp, onions, capicola and red peppers in a rich cream sauce. What restaurant owner John Clinger describes as an American-style, eclectic menu also features Blackened Chicken Alfredo, Shepherd’s Pie and tender Pub Steak topped with a Stout-infused demi-glace.

Opening Old Mill, which debuted about two years ago, fulfills a long-held dream for John Clinger and his wife, Kelly. “Absolutely, I love it,” Clinger says. “My wife and I have been in the hospitality business all our lives. I’m 54 this year. I started as a dishwasher at 14. Aside from a 6-year stint in the military, I’ve been in food service all my life.”

In the past, he ran Clinger’s Tavern in Hanover, Pa. and Clinger’s Public House in Harrisburg, Pa. He actually was looking for a break from the strains and stresses of restaurant ownership when the Clingers moved to Columbia after John Clinger took a job as director of operations for a local restaurant chain.

“We knew when we moved down here that this might happen,” John Clinger says.

“We lived in the apartments on the other side of Mill Pond. I looked at this building and said: ‘This would make a great brew pub. But timing wasn’t quite right. I needed a break. I wanted more time with my family.

“I’m very grateful to have taken the time off that I did. It was nice to cut down to working five days a week. But my wife knew I was still itchy to open a brew pub.”

So Old Mill Brewpub opened in the former Cotton Grill location in Lexington’s historic Old Mill. The restaurant offers all sorts of dishes, an intentional choice, Clinger says, since part of Old Mill’s goal is to bring “people something they haven’t tried.”

Inside the dining area is a relaxed, but still quasi-elegant atmosphere, and features a decor of hand-hewn wooden beams and old brick walls.

A private dining section can host parties of up to 35 people. Kelly Clinger oversees that end of the business and its catering services.

If he had to do it over again, John Clinger would still open the brewpub. But he wishes those early months had been less stressful. “The first year was a struggle,” he admits. “Between opening the restaurant and everything else, it was a lot. The day we got the keys from the owners of the mill is the same day that my wife learned she had breast cancer. That was December 2012.

“We were going through an emotional roller coaster between opening this place care for my wife, caring for the kids,” he says. “ But we got through all of that. The second year seemed to open up a little bit.”

Kelly Clinger’s health prospects look good. And the Clingers’ can-do outlook and positive approach to life bleeds over into the attitude of their staff. “I help manage the restaurant,” explains Doug Seidenstricker, a close friend of the Clingers since the 1990s and part of the restaurant’s management staff.

“It’s a fun business to do,” Seidenstricker says. But you’re right, you don’t get wealthy owning or running a restaurant. Yet John and Kelly are simply first-class. I’m here for the duration.”

What sorts of values does he hope to impart to those with whom he works? The right attitude. Good food. Good beer. And that almost indefinable quality of “niceness” in service and style, the sort of approach and outlook that makes diners come once, and then again and again. “I praise our staff,” he says. “We keep trying to upgrade and to move forward and they help make that happen.”

From part-timers to major managers, Old Mill workers take pride in their work. Jennifer Sturgis, a kitchen manager, loves what she does, especially the variety of foods she gets to prepare and create.

“My favorite cuisines would be Northern Italian and Southern,” Sturgis says. “We do those and we emphasize local foods here. We do a lot of scratch-made stuff.”

Turning thoughtful, Seidenstricker notes the high failure among restaurants. That’s not the draw for people like him and John Clinger. Both say people who open restaurants, who work in restaurants, know they may be at work seven days week. The business has its addictive qualities, the two men admit. But neither wants to do any other kind of work.

Old Mill’s food is high quality and reasonable with entrees ranging from $6 to $14. Its beer is also quite good. With a microbrewer – run by Matt Rogers –now on site, the pub offers a selection of delicious craft beers, including a delectable lighter beer, pineapple kolsch, appropriate for springtime and summer sipping. Rogers also offers regular classes for would-be beer makers.

John Clinger looks ahead and he wants to keep doing exactly what he has been doing, When a customer comes to Old Mill, that person has a right to expect the best. “Quality food. Friendly service and a great value,” says Clinger. And in the restaurant world, that says it all.