This South Carolina couple returned to their home state after 35 years in the Navy and another 10 in Tampa.  Now, they’re back and it feels just right. 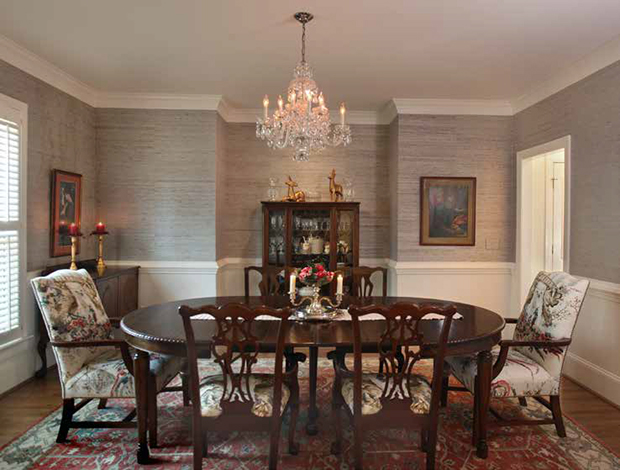 Retired Rear Admiral Jacob Shuford and his wife, Cathy, have traveled the world, living in Seattle, Yokosuka, Memphis, Washington, Boston, Newport and other great cities. There are very few ports along the oceans of the world that Jacob missed during his 35 years in the Navy, with Cathy often there as well.

Their homes, provided by the Navy, were filled with old-world charm and elegant touches such as historic parquet and wainscoting. Water was usually a part of the landscape.  Furnishings routinely had to be stored, to be gathered up later.  Later came in 2018, after Cathy’s mother passed away, and the couple decided to move their family back home to the Carolinas and into her Mom’s place in King’s Grant.

“We had spent so many holidays visiting here that everything felt familiar, but we also had a big renovation required to update the house and make it ours,” Jacob said.  The King’s Grant home, built in 1993, was definitely due for a refresh. “We thought the renovations would last about six months, but the timeline expanded as our ambitions grew.” Jacob said. “Two years later we finished, with much thanks to Wesley Farnum, owner of My Home, LLC and our contractor.”

And there was more to recommend the move back to the Palmetto State.  Both were University of South Carolina graduates, returning often for graduations, sporting events, and work with the University’s Honors College. Two of their three children are Gamecocks: daughter, Campbell, with a BS in Political Science and son, Bennett, due for a BS in Engineering this spring. (Oldest son John should graduate with a Master’s Degree in Psychology from UCF in May.)

Cathy and Jacob were born and raised in Bishopville, but he was six years older and their paths didn’t cross in their childhood town, but rather in Washington.

“Ours was an arranged marriage,” Cathy said, with a laugh. “I was living in Georgetown and Jacob was at the Pentagon.  My mom and Jacob’s dad were tennis partners so they had ‘a good idea’ for us.”

Jacob says the house has a South Carolina theme and indeed it does.  Cathy’s favorite thing is a South Carolina state seal, hanging in the living room.  Unfortunately, Jacob’s favorite thing couldn’t be carried out.  It’s their German Miele range, with six burners and a griddle, plus all the extras.  They both enjoy experimental cooking, and Jacob served up some beautiful, fresh Kalamata and Spanish Olive Sourdough. Indeed, throughout the house are found treasures to cherish.

The bright red front door is inviting and once inside, the invitation continues.  To the right, the library contains favorites, including a number of first editions, many signed by the authors.  The Duncan Phyfe sofa is a family heirloom from her side and the ceiling is covered in silver-tinged grasscloth, sourced (and conceived – as were most of the interior design elements) by Linda Burnside of LGB Interiors. Beautiful new built-in cabinets and a linear series of antique brass lighting wraps the volumes in a warm, archival glow.

To the left is the dining room, with a magnificent chandelier, original to the home. The gloss enamel wainscoting adds a clean look that marries well with the accent rugs, Farrow & Ball paint colors, and grasscloth wallpaper.

Moving through the foyer, we passed a guest bath with a marble vanity and distressed brass fittings, all nested in blue-green forest wallpaper, Raphael by Sandberg.  The bold pattern is framed in high-gloss Hale Navy from Benjamin Moore that continues the variations on blue throughout the house and reaches into the fluted trim and mantelpiece in the living room.

One primary objective of the renovation was to introduce substantially more light into the main living areas. Architect Michael Haigler (whose portfolio the couple had discovered while still in Tampa), completely transformed the shadowed rooms into open airy spaces flooded with natural light.  “We wanted to keep that beautiful southern sunshine from being shuttered away from the house,” Jacob said. “We wanted to bring the backyard inside.”

Michael added two large skylights on the ceiling as well as oversized 8 lite iron double doors as an additional entry onto the back porch.  While the black iron doors are 800 lbs., they operate with a perfectly engineered glide.  Another twin iron door provides the same effect for the kitchen access to the porch.

The door lites have thin black iron trim and add a modern accent to the look of the more traditional Southern porch.

The kitchen was almost doubled in size by relocating the laundry room and pantry to open the area and to retrieve the morning light from the East. A six-light aged “Chaddock” iron fixture balances over the 8½-foot quartzite island.  The chandelier is encased in Italian sterling silver-laced beaded glass which projects lacey designs on the cabinets, ceiling and kitchen walls when darkness falls.

The couple spent months selecting the countertops, but the investment paid off with the gem-like veins running parallel to the lines of the kitchen and flaring behind the range top for the perfect backsplash.

The countertops were designed to accommodate electronic media as well as calf-skin bar stools, all designed to pair with fabric and coverings in a custom-designed table by Tritter Feefer.

Above the table hangs an heirloom print of a live water oak stretching over a slack tide in Edisto.  Titled “Eight-foot Tide,” the Ben Ham photograph rests against a dramatic Phillip Jeffries husk wallpaper.  Capturing this moment of perfect, mirrored calm water in the inlet with a wooden box camera was the work of a true, devoted master photographer.

The original kitchen design had one kitchen window and a French door to the old porch. The new design has triple windows at the sink and the heavy black iron doors.  The new features expand the light and offer bigger views into the re-landscaped rear garden.

The porch was enlarged to allow more generous space for outdoor dining, living and viewing the garden. “My late mother-in-law loved gardening and we discovered more than 500 pots amongst the shrubs and trees,” Jacob said. Local designer John Long updated the entire grounds.

On the other side of the living room is the master bedroom and bath.  The bedroom received a fresh coat of paint that continues the blue theme.  Their choice was Stiffkey Blue by Farrow & Ball.  It’s an inky blue named after the Norfolk beach where the mud and cockle shells share that blue hue. 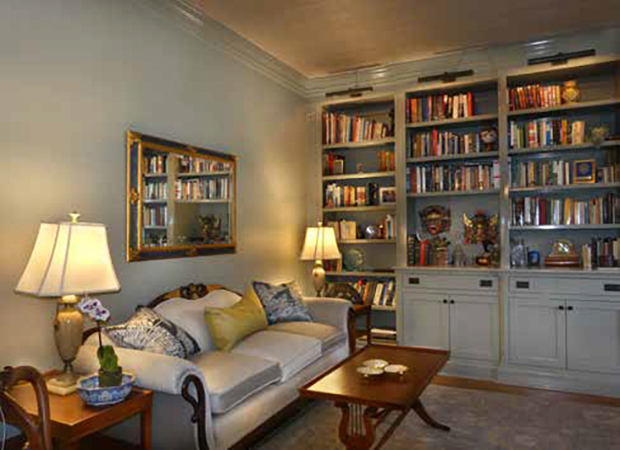 The master bath was completely gutted and enlarged from Michael’s idea of exploiting the unused attic space created by the architectural roof structure and his vision of a vaulted ceiling of sunlight.  A new large window with privacy film was added to the exterior wall of the zero-entry shower.  A large skylight bathes the room in natural light.

Art Deco tiles were used in the shower and behind the custom vanity to complement a set of tall, narrow mirrors reflecting the 19th Century Trumeau style of gilded mirrors. The lower mirror sections conceal recessed medicine cabinets.    Michael added a small cabinet that sits atop the vanity and Paul McCall did the painstaking work of installing the fish scale tiles and the Art Deco accent bands – each piece placed separately. A large mirror was hung by Jacob, since the wall concealed a pocket door and nobody wanted to risk damaging the door.

Upstairs are two guest bedrooms, (one featuring two pieces by Charleston folk artist, James “Squeakie” Stone), a bathroom, new laundry room and storage added over the garage.  The star, however, is the floating mezzanine, where guests (or the Shufords) can settle in with a book, or simply survey the windows that showcase both front and back of the home.

“We had so much furniture the Navy stored for us that we were frankly amazed when the large trucks pulled up with accumulations from a lifetime of moving,” Jacob said. “Some pieces were refinished or recovered, and other pieces were donated to the Salvation Army before we left Tampa and after we arrived in Columbia.”  Now it all seems to have been there forever, highlighting incremental shades of blue and inviting friends and family in to share some time and memories once again.