There’s actually life beyond the world of Disney in Orlando. Forget Mickey, Shamu and Harry Potter… kick it up a notch in Orlando North 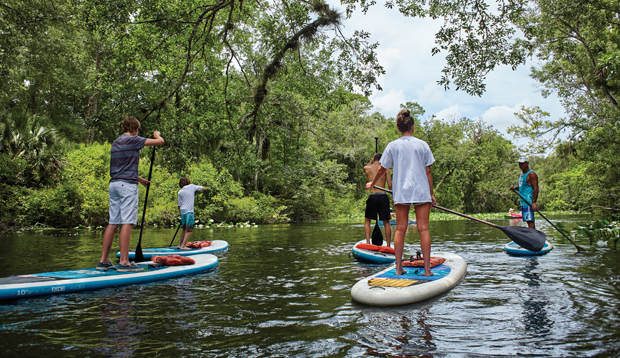 My gal pals and I were longing for a Florida vacation, but we didn’t have theme park or pricey beach resort money. Nevertheless, we still wanted to kick it up a notch in the Sunshine State. Luckily, we discovered Orlando North, an area near Disney World that’s off-the-beaten track. It’s a getaway packed with outdoor adventures, savory food and drink and an exuberant nightlife. The towns of Orlando North have it all at affordable prices.

Nature lovers can breathe fresh air in natural Florida. In 2009, Bill Weinage established a Green outdoor experience on Wekiva Island, a small isle hidden amid upscale developments in Longwood. The site has been awarded the prestigious LEEDS (Leadership in Energy and Environmental Design) Certification. For 365 days a year, lovers of the Great Outdoors can kayak, canoe, waterboard, fish and swim on little Wekiva River which runs through the wooded area.

Entrance is free, but there’s a fee for the use of equipment. Lunch Without a Paddle, an on-site food truck, provides a unique culinary experience with a menu of lobster rolls, coconut shrimp baskets, Philly cheesesteaks, quesadillas and more. And wet your whistle with soft and hard beverages at their open-air bar.

Imagine the excitement of the airboat ride at Black Hammock Adventures in Oviedo. Speeding over the waters of Lake Jessup that harbors the largest alligator population found in a Florida lake thrills adults and kids. Gator spotting is almost guaranteed as the boat slows down next to patches of cottontail, eelgrass, laurels, hyacinths and other plants. Overhead, eagles, egrets and herons soar. Linger longer and enjoy all the venues on land. A café serves traditional Fish Camp fare that includes the best fried gator tails around. (Yum!) Sit and sip in the Lazy Gator Bar with stunning views of the lake. And don’t leave without an unforgettable photo-op holding a baby alligator.

In 1923, a traveling circus didn’t know what they were starting when they gifted a rhesus monkey to the Elks Club in Sanford. Interest grew as the Sanford Fire Department got on board by acquiring a squirrel, a bulldog, a skunk, an opossum, a raccoon and another monkey. Over the years more animals were added until the city had a zoo.

Today, the Central Florida Zoo and Botanical Gardens is still in Sanford, but now there are over 400 animals that include over 100 species, and it’s a member of the Association of Zoos and Aquariums. It’s also a non-profit wildlife, education and conservation resource for the entire family. Visitors can get close to many animals, such as feeding a giraffe or touching a one-horned rhino. There are entertaining and educational shows, a splash pad, and staff members stroll the grounds showing off non-threatening animals.

If walking, jogging, hiking, biking or horseback riding is more your speed, choose from one of three recreation trails that cut through Sanford, Oviedo, Longwood, Winter Springs and Lake Mary. It’s an opportunity to enjoy some of the state’s most beautiful scenery.

The adventure continues when dining out around Orlando North. Diverse tastes are satisfied with menu offerings of ethnic, fusion cuisine, farm-to-table and Southern favorites.

People literally eat their way along Sanford’s First Street. The Willow Tree Café found a new life in 2009 when Theo and Linda Hollenbach opened their restaurant with their mission of introducing and sharing German Gemutlichkeit, which means happiness, friendliness and coziness. With unforgettable food and entertainment, they’ve succeeded.

The dishes are hearty and authentic. All kinds of wursts, beef, pork and seafood make up dishes, such as Sauerbraten, Eisbein and Zigeuner Shrimp. But even carnivores enjoy the Vegetarian Spatzle Toss. Besides the usual libations, the bar pours German Beer, German wine and Schnapps. As a family food destination, prices fit the family budget.

Thursday through Sunday steps up the German experience when Jimmy Horzen and Eckhard Wachsmuth perform. The duo whips up the diners to laugh and dance as they sing, joke and play polka music on an accordion, Alpine Bells, spoons, the Alpine Horn and other instruments. It’s a fun, spirited and enjoyable show.

At Tennessee Truffle, southern fare meets the creativity of Chef Nat Russell, a CIA graduate, as he updates breakfast and lunch staples. For instance, he cures the bacon for 15 days, and imports Heirloom grits from Africa. And the biscuits smothered in gravy are to die for.

For a unique sweet treat, stop by Wondermade. Nathan Clark began making marshmallows as a special gift to his wife, Jenn. We’re not talking the round balls found in every supermarket, but craft marshmallows, infused with a variety of flavors – some with a kick, like Marker’s Mark bourbon.

But my chocoholic friends had us veer off to Lake Minnie Drive in Sanford to find Chocolate Compass. They ended up drooling over a bevy of hand-dipped bonbons, chocolate cookies, truffles, ice cream and more. That shop has everything except Willy Wonka.

Good brew news: Established and emerging breweries have set up in Orlando North. The beer boom began in 2012 when Hourglass Brewery became its first microbrewery. Since then, five more have opened, and three craft breweries are scheduled to open soon. For a night on the town, make that downtown Sanford. In just a few hours, you can hit an eclectic array of bars and taprooms. Much of that time can be spent in Celery City Craft that sports traditional pub fun of steel darts and weekly shuffleboard tournaments, all while guzzling 100 varieties of suds and 51 craft beers on tap. Class it up at the Imperial at Washburn Imports as you sample more than 40 beers and small bites while sitting on imported antique furniture and listening to live music. Or bar hop on Limo Cycle Tours, a pedal-powered open-air trolley that stops for a drink at all the hot spots on the crawl.

As we headed back home, via the nearby Sanford-Orlando Airport, we had smiles on our faces, tans on our bodies and money in our pocketbooks.