If Pat Callahan is in it, you can be sure it’s a visual space. 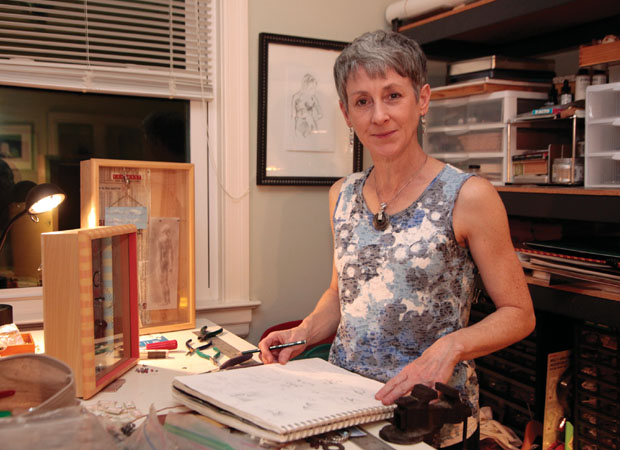 The familiar terrain she traverses, early mornings before heading into work, becomes her first visual space of the day. Along her jogging route, she may spot a shiny object that will end up on her jewelry-making table later.

Her office at the University of South Carolina Press, where she has been a book designer for 16 years, represents the second visual space she enters weekdays.“I love what I do and have a terrific team to work with,” said Callahan, whose distinctive insights adorn the covers and interiors of some of the press’ most sought-after titles. “After I have been in this demanding flow during the day, I try to retreat to my studio and quiet my mind.”

After a full day at the office, she looks forward to shifting creative gears - at least some evenings - for a few hours in her studio, her third visual space. As her eye for design has become more seasoned, more experienced, she has allowed new aspects of art to inform a subsequent one. Jewelry is the most recent addition to her creative output.

Callahan explains the evolution of her creative output.

First and foremost, there was drawing, “and certainly I still draw. As a teen I drew with dedication and loved the few figure drawing classes I had during college. Somehow I stopped drawing after college, I guess to get my career underway.” Her design career has included work with a few advertising agencies and both the Virginia Museum of Fine Art and the Columbia Museum of Art (CMA).

Her broad knowledge of art and drawing are notable not only in the figurative works she renders in charcoal and pencil, but also in the books she designs for the press. “I love working with typography and learned the traditional ways, before technology changed graphic design so dramatically. I appreciate the intricacies of letter form; I favor certain fonts and design elements, especially some Art Deco classics. “

When she resumed drawing in the late ‘90s – then with About Face (an art group whose members draw from live figures in a ground level space at Columbia Museum of Art), she found that her distinctive figure charcoals, sometimes created in other traditional drawing media, quickly made a mark on the local art scene. “I find that drawing a classical subject – the body – is a good balance for my computer-based career. In working from life, I strive to capture the beauty and strength embodied by the subject.”

In time, her visual spaces had her thinking inside the box – via crafting contemporary shadow boxes. For these constructions she pulled innate skills from the building and engineering environment in which she was reared. “My father was is a mechanical engineer who built and repaired whatever was needed at home. I marvel still at his inventiveness. He lived the ‘mantra’: If you look at something long enough, you can figure it out.” Callahan’s shadowboxes arouse questions, display statements, relay stories, and the artist conveys her thoughts deftly with what she can plunder as her art elements.

Her inspiration for shadowboxes that artfully combine graphic elements and found objects artfully placed inside well-crafted wooden frames was Joseph Cornell. “Cornell created these mysterious shadowboxes that I first encountered when was in my teens and when I found them in a Washington, D.C. museum, I walked around and around that gallery, mesmerized by his shadowboxes on the walls.”

With Cornell’s constructs in mind, Callahan employs the diverse material available in her extensive and well-ordered larder, to carry out a design that formed in her mind. Each piece is a manifestation of problem solving. “My creative energy goes toward finding solutions,” said Callahan, whose jewelry, figure drawings, and shadowboxes were featured in a recent show on State Street at Gallery West, which represents her. “Even if my solution doesn’t work out, I learn something from the effort, especially by pushing further out.”

Most recently, Callahan allowed jewelry-making to become the focus of her creative output. “Wire techniques and found objects that I was using with the boxes led to handcrafting jewelry. Like elements in the shadowboxes, incorporated from found objects I had long collected, the jewelry-making allows me to repurpose cast-off things into something beautiful, something inventive and unique. Art that can be worn.” Callahan added that using found material is also very cost effective for a jewelry designer.

“I reserve Saturday mornings for studio time which I devote to my work with jewelry, an endeavor I call Entangled Jewelry. I work primarily with found objects; for many years I have enjoyed collecting, sorting and anticipating what I could make from these natural and metal findings.”

The artisan synthesizes a bonus benefit into her creative expressions: fitness. Her jewelry is crafted from post-consumer findings picked up on her jogs through her suburban Columbia neighborhood. “My husband, Bob Wislinski, is an even better forager than I am; while I run mostly before dawn, he walks later in the day, so he sees more things and often comes back with his pockets filled with things he’s picked up for my work in creating jewelry. We find the most at intersections where people have made abrupt stops, in parking lots and beyond where street sweepers reach. He’s been so successful I’ve had to come up with more efficient ways to sort and store the elements.”

Callahan said found elements are abraded with a distinct texture. “ For some pieces, I may leave the rust on or I may sand it off, depending upon the design I have in mind. This is just one of the decisions I make in the process.”

So far, Callahan achieves her jewelry creations through only cold connections – no soldering of the metal she repurposes into distinctive jewelry. “I marry the parts as efficiently as possible, using tension and pressure, bringing them into an exact fit.” Callahan has heard a growing number of repeat customers portray her jewelry as exquisite, which she interprets as a tribute to the pieces’ clean lines and simplicity.

In many ways this artist’s jewelry mirrors her drawings from life. Each piece is both ordinary and unique, and beautifully real.