A Passion for Peru

Text and Photographs by Katie McElveen 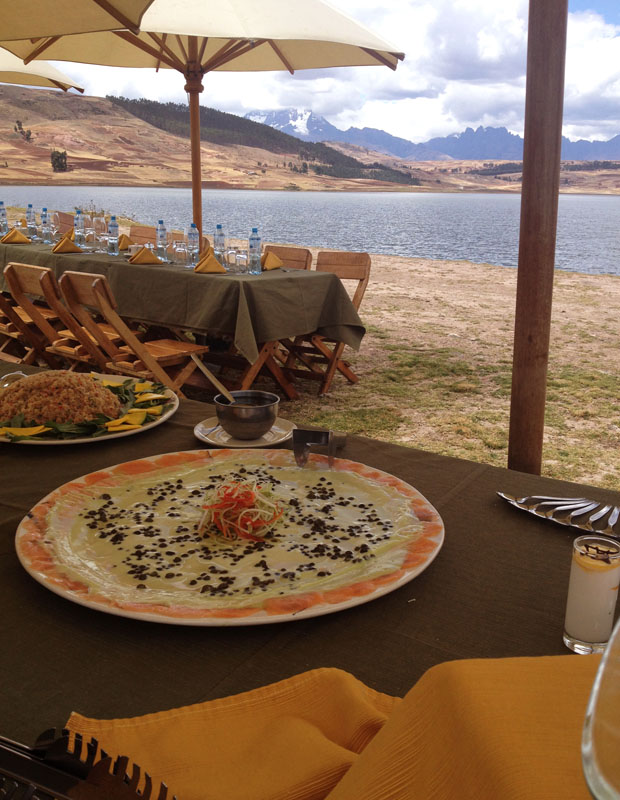 I’m standing on the edge of a cliff in Peru’s Sacred Valley, wind swirling around me, looking down hundreds of feet to a distant patchwork of potato and barley fields. To my right, glacial snow frosts the jagged gray Andes; to my left, an endless plateau of rugged earth. Behind me, a trio of men untangles the lines of the oversized parachute that, in a few moments, will be transporting me over this stunning landscape. If I can keep my nerve. “Yes,” I reply. “I’m ready.”

With that, I was strapped into a harness, attached to both the chute and my instructor and given the signal to run as fast as I could. I had taken three steps when I felt the tug of the straps, and, seconds later, I was airborne, legs now bicycling uselessly through the air. We ascended more quickly than I’d realized – by the time I chanced a look down, the team had been reduced to specks on the ground and the mountains were at eye level. As we soared, my pilot, Franz Schilter, pointed out the lake where we’d had lunch, the town we’d toured that morning and, in the distance, Urubamba, the largest city in Peru’s mythic Sacred Valley of the Incas.

I hadn’t come to Peru specifically to hang glide, but as I researched the region, I learned that the rushing rivers, tall mountains and network of trails that punctuate this part of the country have long attracted adrenalin junkies, who come to not only hang glide, but to white-water raft, kayak, trek, ride ATVs and horses, mountain bike and bungee jump as well. The main attraction, though, is Machu Picchu, ruins from a 15th-century Inca city tucked into a mountain valley 2,000 feet above the Vilcanota River – and 7,900 feet above sea level.

Although most visitors choose to stay in the colonial city of Cusco, with its cobbled streets and 15th century monasteries or in Machu Picchu itself, I’d chosen Urubamba as my base. Set in the valley roughly halfway between Cusco and Machu Piccu, Urubamba is surrounded by small villages where women in traditional Peruvian skirts and tall hats sell alpaca sweaters and scarves, intricate hand-woven blankets and shawls and other handicrafts while their husbands and children tend to fields and livestock.

I wasn’t excited about the prospect of visiting the salt mine in Maras, but I’m glad I made the time. Carved into the side of a mountain, the mine’s patchwork of terraced evaporation pools have been transforming the mountain’s super-salinated water into flaky salt crystals since before the Incans arrived. As I watched, workers hoisted gigantic salt-filled sacks onto the backs of mules for the trip to market, just as they have for generations. Further up the road, in Chinchero, I bargained with weavers for a colorful blanket and explored the city’s magnificent cathedral, which Spanish missionaries built more than 500 years ago on the site of an Incan temple. Frescoes, still vivid after five centuries, decorate the entrance; inside, a gilded altar rises three stories to an ornately painted ceiling. All that decoration was not without reason: priests believed the swag would help convince the Incans to give up their gods and convert to Catholicism. It worked, to a point. While nearly all of the country is Catholic, Peruvians also respect the rituals of their ancient ancestors, bringing shamans from the mountains to bless crops and holding festivals honoring the Virgin Mary and various gods. Beyond the Christian splendor, the area behind the temple is scattered with still-regal shrines, fountains, altars and other Incan remains.

Urubamba is also home to Sol & Luna, a culturally innovative boutique hotel that was created to provide funding for the private school that Schilter and his wife Petit Miribel, wanted to build. The school became a reality in 2009; today, 150 students, including the owners’ two children, attend. Ninety percent receive free tuition and meals, which are created by the resort’s chef, Nacho Selis. Hotel guests are welcome to visit the school, where they can give the children a chance to practice their English.

Set around of garden planted with bougainvillea, calla lilies, geraniums, mature trees and exotic blooms in every hue, each of Sol & Luna’s 43 casitas is an art-filled space filled with colorful tapestries and original murals, sculptures, carved furniture and handsomely rustic ironwork, all of which was produced by Peruvian artists and artisans. Premium and deluxe rooms add creature comforts like heated stone floors, wood-burning fireplaces and oversized bathrooms with soaking tubs to the list. Surprises abound – the first night, I bolted out of bed after rolling onto something warm and furry, only to discover that it was a hot water bottle that had been slipped between the sheets. Beyond hang gliding, diversions abound and include a spa, outdoor excursions, an acrobatic performance by former Cirque de Soleil acrobats and a horse show on the resort’s team of Peruvian Paso horses, which are known for their unique prancing gait. The horses are also available for trail rides.

Visiting Machu Picchu is a full day event, or more. We took an Inca Rail train from Ollantaytambo, about a half-hour from the resort. Like most of the trains taking passengers to Machu Picchu, Inca Rail offers several classes of service. Unlike the others, the company has a private rail car that can be rented for up to 14 people. Besides Champagne and two multi-course meals served on china and crystal – ceviche made from trout pulled from the river we were zipping past, a chocolate tasting – charter-car passengers sip unlimited wine and spirits and can take in the landscape from an outdoor balcony.

Established in the 15th century, Machu Picchu’s thousand or so residents thrived until the 16th, when the Incas were conquered by the Spanish. 400 years later, armed with a machete and a local guide who had once visited the ruins, Yale historian Hiram Bingham came in search of the lost city of the Incas. Thanks to his efforts, the remarkable site tops bucket lists around the world. And rightly so. From a distance, I was able to take in its magnificence in size and design; up close, minute details illustrated the innovative genius of the Incas. Like Peru itself, it’s astonishing, whether you’re admiring it from the sky or at eye level.