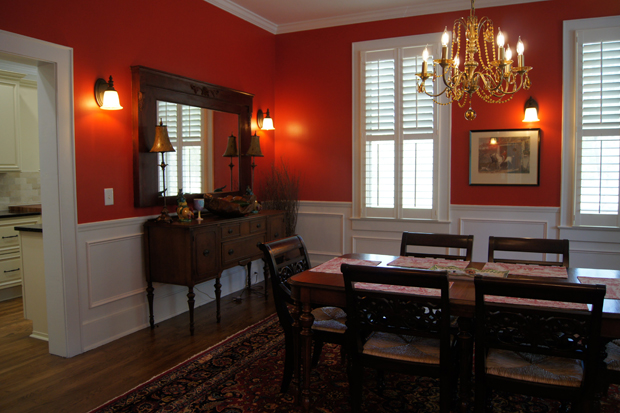 Erin and Joe Trimmier have room to roam on their 93 acres just outside of Ridgeway.  As veterinarian co-owners of Ambassador Hospital on Forest Drive, they’ve both had animals in their lives since early childhood and know what joy they bring to families. Several years ago, they lived in an older home on ten acres in Columbia, but this former plantation-turned-school took their desired lifestyle to a whole new level.

The sense of place has much to do with the location’s appeal. Ridgeway is a tiny gem of a village that has only become a bedroom community since the ease of travel up and down I-77. Original settlers have been there since the 1700s, but the home the Trimmiers bought was a relative latecomer, built in the mid-1800s and known as Magnolia Plantation.

The house burned in the 1930s but was rebuilt to exacting specifications. The majestic columns were brought from the upcountry to replace those lost in the fire. Eight symmetrically placed tall windows added natural light to the inside. After the home and grounds changed hands several times, it became Barclay school where former bedrooms became classrooms and half-baths were carved out of spaces for the needs of the students.

In 2019 The Trimmiers took on the challenge of restoring it to its former residential glory.  With the support of Jerry Chivers’ Palmetto Contracting and Tony Huggins, they succeeded on time and on budget.

Today, its 4,200 square feet fits this family of four very well. Original white oak flooring was refinished and pine floors added to the back of the house. The extra bathrooms became part of the master suite.  The kitchen was updated, with black marble countertops and storage tucked away. “We wanted open site lines to the dining area but didn’t want to have to keep everything pristine all the time,” Erin said. The pantry remains hidden and the cabinets keep it all tidy. 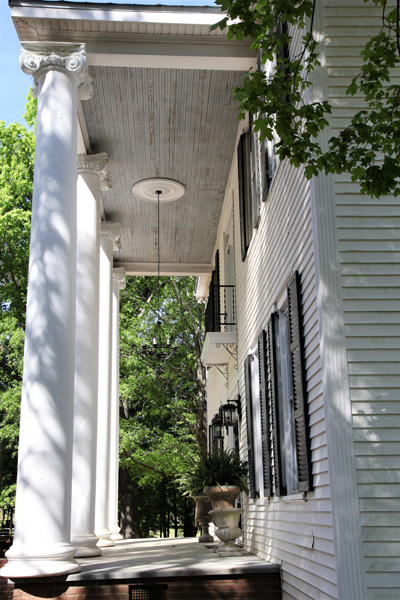 The front of the house is typical for its time with 11-foot ceilings that add a sense of grandness to the rooms.  To the left is the living area, filled with treasured furniture from both families and some strategic finds along the way. It’s painted in Svelte Sage, cool and inviting. “We didn’t have to buy area rugs,” Erin said, noting that there was one exception. “We had nothing that would reach through the body of the home in the hall,” she said. “Everything else fit perfectly from our former homes.”

One of the half-baths was renovated for guests, off the central hall. The other two were absorbed into the master suite.

To the right of the entrance is the dining room, painted a more vibrant Red Tanager. The table and sideboard are family heirlooms. They purchased the chairs. Tony Huggins built the elaborate wainscoting around the room and in other areas of the home. Two chickens – art pieces on the sideboard – are Erin’s favorites. For Joe, the dining room table is a real treasure. “I remember eating at this table as a child at family gatherings, with my parents and grandparents,” he said. Artwork features horses and dogs mostly, a theme continued throughout the home.

The door connects to the updated kitchen which includes a massive six-burner stove. Joe designed the cabinets and they were built to his specifications and installed by 803 Cabinets in Lugoff.

The back of the house is the family’s entertaining and lounging area. The décor might be called farmhouse chic, with walls painted an inviting blue Delft, leather furniture and a tall armoire which is a family piece. The focal point of the room is a large brick fireplace with a wood-burning insert. Another large area rug fills the space and adds warmth. To the right are doors to a new deck with benches, a grill for outdoor entertaining and killer views of rolling hills and woods. Their dogs spend lots of time outside, managing the property.

The back left of the home has been turned into a comfortable master suite. Big furniture, another gas fireplace, walk-in closets and storage, and an ample bathroom with double vanities and a walk-in shower offer a private retreat that’s accessed from the central hall or the back edge of the living room.

“I love the heated marble tile floors,” Erin said. “I would never live without them again.”

Twenty-one steps lead to the upstairs with its central hallway. The boys’ bedrooms are on either side, decorated with their treasures from soccer games and equestrian events. Jack and Jill bathrooms serve one son’s bedroom and the exercise and gaming room on one side, and the other son’s bedroom and guest room across the hall. A family quilt adorns the guest bed and invites snuggling under the covers on a chilly fall evening. A small roll top desk belonged to Erin as a child. The room is perfect for visiting family and friends.

At the front of the second floor is a step-out balcony, built so they say, to allow a young bride to stand outside, wave to family and friends, and perhaps throw her bouquet to her attendants.

The house is an amazing combination of traditional and updated. History, with all the conveniences. But there’s more. Ninety-three acres is home to horses, chickens and lots of creatures of the forest.

“I love to ride and we have four horses,” Erin explained. She and one of her sons ride as often as possible. The barn is visible up the hill, and the horses look toward Erin and the house – curious about newcomers, no doubt. Her “favorite horse ever” is Grace, a thoroughbred. Other members of their equine family include Tango, their son’s paint horse, Punky, an outgrown pony who is always on a diet, and Livi, their Hanoverian. In her spare time, Erin enjoys three-day eventing and foxhunting. (No foxes are ever harmed – it’s a hunt in name only which actually gives Erin the chance to dress up and ride horses with friends.)

The chickens are curious (or maybe hungry) as well, and leave their pen to ask for treats before being shooed back in. The dogs watch from a safe distance. Around the back of the house are outbuildings.  Some have been used for storage, others look like barns or buildings for tools, and one with windows could have been a child’s playhouse long ago. There was a creamery on the premises in earlier days. A basketball goal is a nod to the Trimmier teens.

Their current project is renovation of the original smoke house and upgrading it to gas. Barbecues and Thanksgiving turkeys sound promising. A future project may well be creating a loggia under the first floor, which offers a protected retreat at the back of the house. It will be perfect for viewing the woods, with its pines and hardwoods, including live oaks and magnolia trees. A pecan grove is out of sight, but still a great producer of nuts for family recipes and gifts to friends.

“The inside renovation is complete, but we’re still working on the outside,” Erin shared. “The nice thing is, it gives us so much room to explore and enjoy outdoors. And while I ride my horse, Joe can hike or run the property.”