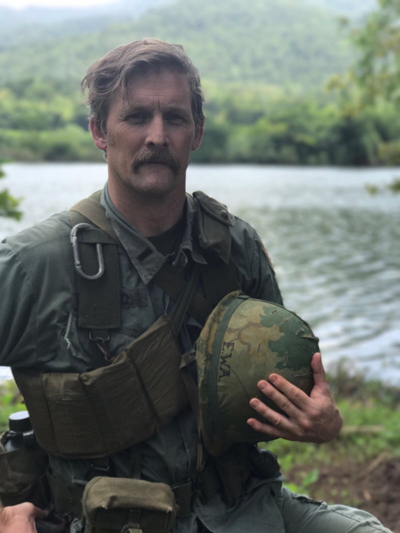 Before the corona virus shutdown, native Columbian Julian Adams sipped on a latte at a coffee shop, relaxing for a while to talk about his role in producing the highly acclaimed Vietnam War movie, “The Last Full Measure.”

If his part in the production were the sum of his accomplishments, it would be a sufficient accolade for most. But in contemporary parlance, he’s a genuine polymath with other extraordinarily broad and varied gifts as an actor, producer, artist, architect, historian and writer.

Yet, if you ask him to choose one word, he says foremost he is a patriot who loves his country. He comes by that naturally as the son of Ambassador Weston Adams and the late Dr. Elizabeth Nelson Adams. There were lively discussions around the dinner table with stories of ancestors’ roles in American conflicts well before the American Revolution as well as debates on current issues with his father’s views in various leadership roles and his mother’s astute observations as published poet and noted artist.

Spending formative years in Africa, when his father was ambassador to Malawi, Adams became close to an embassy attaché, who as a Vietnam veteran, left a lasting impression on him. He would later call on those memories when asked to take part in “The Last Full Measure.” As theaters closed nationally due to the coronavirus, the movie, along with others that recently were on the big screen, have arrived early on digital rental or streaming services for audiences to watch at home via the internet.

Adams not only produced but also co-starred in the movie telling the heroic story of Air Force Para-rescue jumper William H. Pitsenbarger and the men of Charlie Company in the Battle of Xa Cam My in Vietnam in 1966. Starring Samuel L. Jackson, Ed Harris, William Hurt, Christopher Plummer, Peter Fonda, and Diane Ladd, the movie from Roadside Attractions was written and directed by Todd Robinson.

Adams plays the role of Lt. John Quaid in the horrific battle scene. It shows American soldiers being slaughtered by machine gun fire raining down upon them from the enemy who had strapped themselves into three-story high canopied trees for an aerial ambush on the exposed infantrymen beneath them. Instead of escaping heavy enemy fire in the last helicopter, Pitsenbarger remained behind to help the stranded, outnumbered 1st Infantry Division survive, paying the ultimate price with his own life. Through his heroism, Pitsenbarger, played by Jeremy Irvine. saved some 60 regular soldiers in one of the bloodiest battles of the war.

Surviving comrades worked for three decades to honor Pitsenbarger posthumously with the country’s highest military award, the Medal of Honor. MSgt. Thomas Tulley played by William Hurt led the effort. Yet, his champions’ efforts were repeatedly ignored. Finally, a civilian lawyer for the Pentagon named Scott Huffman played by Sebastian Stan (based on real-life historian W. Parker Hayes, Jr.), was inspired to join the cause. His efforts uncovered an injustice buried by decades by lawmakers reluctant to reveal the poor decisions that caused so many deaths.

Finally, in 2000, the Medal of Honor was presented to Pitsenbarger’s parents in a ceremony at the U.S. Air Force Museum in Dayton, Ohio. Their son is one of only three enlisted airmen in history to receive the nation’s highest military recognition. In a powerful scene, the movie shows veterans, both young and old, weeping openly, a reaction repeated in theaters across the country. 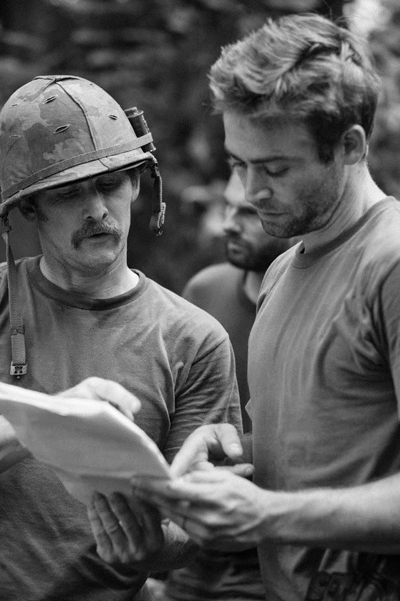 “Pitsenbarger voluntarily stayed there and gave his life for these men he did not know. This is a story of absolute altruism,” says Adams, “and the film is one of the most satisfying endeavors of my career.

Adams describes his sense of fulfillment in producing such a stirring story of selfless heroism as “The Last Full Measure.”  The movie, taking years to complete, allowed him to become close personal friends with the veterans who survived the battle.

“They are my friends and my heroes, inspiring me to persevere in telling their story.” Although numbered among his most recent heroes, they are not his first. His father, who served as a major in the U.S. Air Force, has been his hero since childhood, and remains so today. He too provided great encouragement to Julian as they continued overtime with the movie’s development.

As a youngster accustomed to art in progress in his mother’s studio, creative expression was encouraged at an early age, thus his choice of fine arts as a college major. He has always enjoyed painting, but he also wanted to be pragmatic in the choice of a profession. “Architecture is an art form,” he noted, “and not only technical expertise but also artistic sensibility is essential in creating great architecture.”

Since childhood, he has enjoyed the creative process, saying it’s still his most satisfying endeavor. He began experimenting with cinematology as a weekend diversion. At the same time, he and his father wrote what would become the feature film, “The Last Confederate.”

Set in the Civil War period, it essentially is a love story demonstrating how a devoted marriage overcomes the challenge of divided family loyalties and regional differences. The movie, which won ten awards on the film festival circuit, is the story of direct ancestors, Richland County native Confederate Capt. Robert Adams and Eveline McCord Adams of Philadelphia,

At a Tahoe Film Festival, Adams met filmmaker Todd Robinson, who approached Adams about a possible role in “The Last Full Measure.” Adams was so riveted by the Pitsenbarger’s story, he quickly became dedicated to the effort, becoming a producer with a major hand in the movie’s development.

Even with such a satisfying achievement as the movie’s release, Adams always has his mind on the future with a reservoir of ideas. “Now, the world pandemic has become an unparalleled crisis on which we all are focused,” he noted soberly.