“Golf can best be defined as an endless series of tragedies obscured by the occasional miracle.” Anonymous 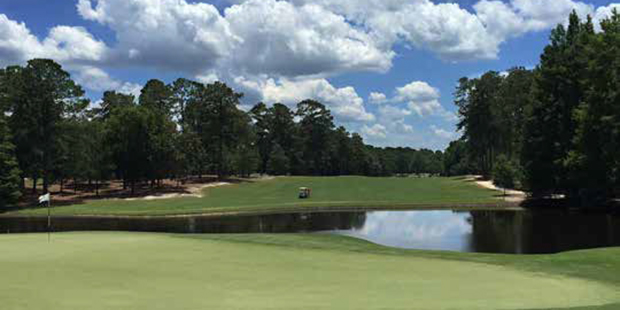 It’s early morning and the sun hasn’t reached its peak so it’s still cool. Birds are chirping and you and a group of friends find yourselves surrounded by green grass, water and trees. For some, this description may conjure visions of a scenic hiking trail; for others. maybe a trip to the family lake house; and for the masochist, a round of golf.

All jokes aside, while some may feel that golf is a slow and miserable way to spend in afternoon, (direct quote from a poor golfer), for those who love the game, nothing beats an afternoon of playing 18 holes. As World Golf Hall of Famer Chi-Chi Rodriguez once said, “Golf is the most fun you can have without taking your clothes off.” If this statement resonates with you then here is an introduction to a few good courses in the Columbia area, public, private and semi-private.  Here’s hoping you stay out of the bunkers.

Cobblestone is a semi-private course, giving tee time priority to members by allowing them to book times two weeks in advance, while nonmembers are only given a week. Located in Blythewood, unlike your standard 18 holes Cobblestone has 27 holes or three sets of nine, with the Garnet nine, the Black nine, and the Gold nine. Golfers who book tee times at Cobblestone then choose which two nines they would like to play that day; and the gold and garnet nine both have a par of 35 with three par 3s four par 4s and two par 5s, while the black nine has a traditional setup with two par 3s five par 4s, two par 5s, and a par of 36.

The course also has its fair share of obstacles and between the 27 holes there is a total of 102 bunkers and 13 holes which feature water. While the course is conducive for all skill levels it should be noted that there are lots of hills, which make it a little difficult for walkers and may present a challenge for players who are used to playing on flatter courses. However, for golfers looking to practice playing at different elevations Cobblestone is ideal. Head golf professional Michael Burroughs said that what makes Cobblestone stand apart from other courses in the area is simply its beauty. “The biggest attraction at Cobblestone Park is the terrain and the grounds,” said Burroughs. “I mean it’s beautiful out there, there’s so much undulation and it’s really a sight to see.”

Cobblestone also has a full-service restaurant and bar inside its clubhouse, giving players something to look forward to after a long game. Offering a wide variety of foods ranging from wings to wraps to steaks and with dinner specials on Thursdays and Fridays there’s a little something for everyone at Cobblestone Park.

With 419 Bermuda on the fairways and TifEagle greens is not hard to see why this course is a popular host destination for big tournaments like the SCGA Amateur Championship. This course’s layout also offers 27 holes with the Ridgewood, Tall Pines, and Lakeside courses, all of which have a traditional set up of two par 3s five par 4s and two par 5s. However, when choosing which two courses to play, players should know that certain combinations of nines are more challenging than others. Nevertheless, between the three course there are 82 bunkers and roughly 8 holes featuring water.

LPGA player and Lexington local Katelyn Dambaugh Sisk who occasionally practices at Columbia Country Club said that the greens on the course were always well kept. "The Greens at Columbia always stick out to me because they are always very good, and they are consistently good," said Sisk.

Something else notable is that the greens and tee boxes are very close, so walkers can go directly from the greens to the tee for the next hole. Head pro for Columbia Country Club Chris Sparrow said that this creates a fast pace of play. “Our pace of play is 3 hours and 45 minutes, which is incredible,” said Sparrow. “It’s that easy to navigate and get around, you go to some places, you know, and you have a 200-yard distance between one hole and the next.”

After playing 18 holes the clubhouse has a restaurant and bar where golfers can enjoy refreshments. Additionally, being located in Longcreek Plantation the clubhouse itself is unique as it features a lot of old southern architecture making it a popular spot for weddings and banquets.

Columbia Country Club is private, so if you're interested in playing the course one thing you could do is make friends with a member, as members are allowed to invite one guest once a month. However, the easiest way to play the course is by becoming a member and the quickest way to do this is by contacting the club. It should be noted that there is a small process that has to be completed to obtain membership, however there is no waiting list and everyone who completes the process becomes a member.

With four par 3s, ten par 4s and four par 5s and a par of 72, anyone can book a tee time at this public course located in northern Richland County. An interesting feature of the course is that it gets progressively more difficult and if you’re playing from the silver tees the slope rating for the front nine is 118 and comparatively 131 for the back nine.

Head pro for Oak Hills Young Lim said that this is largely because of the course design. “The front nine I would say is very open and gives a lot of players very good accessibility to hit great drives,” said Lim. “Back nine it’s a little bit more. The tree line is a little bit tighter so you get the best of both worlds I believe.”

The course is walkable but some holes are a little more challenging to walk than others and can be tiring. Lim said that the 15th hole par 4 which is shaded by a tall oak is the signature hole for the course. “We have a beautiful big oak tree that protects the shots off the tee box, and gives you that nice visual of our logo” said Lim. “We hear from a lot of people who love that hole.”

While Oak Hills doesn’t have a restaurant, the clubhouse does have a small food service where foods like hotdogs, hamburgers, chicken tenders, and grilled chicken sandwiches can be purchased.

This course has a rich history as Wendy’s founder Dave Thomas at one point owned the course after trading for it. In 1987, Thomas traded his 91’ Broward yacht for the country club with then-owner of the Woodlands Ron Scherer. Thomas lived in a house on hole number 1 for twelve years before ultimately selling the club in 1999.

Historically the Woodlands has been a private club but has recently become semiprivate, opening the course to members only between the hours of 8-11 a.m. and to the general public after 11. It should also be noted that only members are allowed to walk the course while nonmembers are required to rent a cart. With four par 3s, ten par 4s, and four par 5s, par for this course is 72.

While the course is feasible for all players it’s geared more toward intermediate golfers with the front nine being a little more difficult than the back nine for scratch players. However, for bogey players the back nine can be a little more challenging depending on the gender of the player and which tee box they choose to play from.

Head pro Danny Hodge said that something special about the course is that you can play it relatively quickly after a rain. “We’re located in the sandhills of Columbia and it can rain like crazy for half a day and within a couple hours you can go out there and play it because it drains,” said Hodge. “This course probably drains better than any course in Columbia after a rain.”

If you’ve worked up an appetite the clubhouse has a full-service restaurant and bar. The restaurant offers weekly specials serving chicken wings and fajitas on Wednesday nights and a Chefs choice on Friday nights where some specialty items are available only for that evening in addition to the regular menu. g