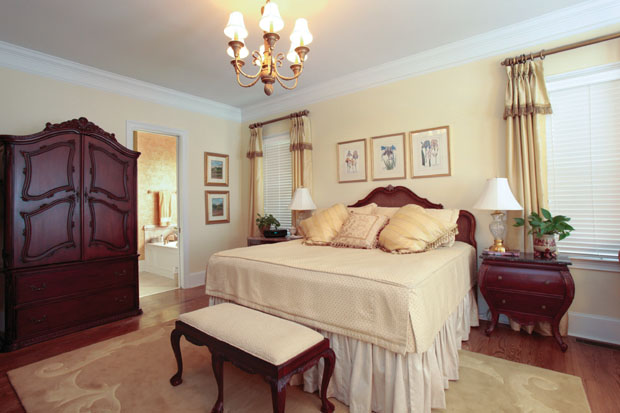 Have you ever wanted to live in the perfect home? That’s a tall order, as no home can be totally perfect in every way. But for the Miller family, their home is as close to perfection as they’ve ever wanted. Smartly designed for their every need, right from the beginning, their home in Congaree Park combines a restaurant-quality gourmet kitchen with great spaces for entertaining in a prime location close to the heart of downtown Columbia.

Ann and Larry were thinking about a new home and just along that same time, a developer began planning the new Congaree Park community, right over the Gervais Street bridge in West Columbia. The market was hot and riverfront development on the Congaree and the West Columbia Riverwalk was just starting to happen.

Ann works in the real estate industry and had an early chance to see the neighborhood plans. “We walked around and looked at it,” Larry explained, “and we had an interest.” The family was living in Summit Place and, while they loved their house, they were ready to do something new.

The Millers couldn’t get onto the property to walk the proposed lot in Congaree Park, since the land was heavily wooded. “We bought this lot off a topographic map because you couldn’t actually see the lot itself. We used to drive to the old Joe’s Crab Shack next door and look over at the trees in the general vicinity of where we were going to build,” Larry said. The location and river view were enough to seal the deal.

They worked hard on creating the most functional layout they could for their lifestyle. In this community, the lot sizes are small, which is to be expected in an urban neighborhood. The footprint of each home is fairly compact and the trend here is for taller homes to have usable space and take advantage of the river view. The Millers have a larger lot than average because they selected a corner lot with a little more acreage.

“Larry drew a big part of what we wanted on a paper napkin the first time we met with the architect,” Ann said. The first plan created stopped on the rear too early, so the architect added symmetry and made a bay window and a sitting room in the downstairs master bedroom to match the bay window in the kitchen. Ken Livingston was the architect. He has since passed away. “Ken did so many houses in Wildewood, and was known for planning those big houses with sweeping windows. He is responsible for a lot of great architecture in the 80s and 90s,” Ann continued.

Once the plans were complete, they had several builders look at them to get ideas of the cost. Every builder said the plans were the best they’d seen. He was thorough, down to the smallest detail. “He designed this space for baby grand piano that was my grandmother’s,” Ann said. “He came and measured the piano and built the room to fit it perfectly. If we took out the piano, it would be great for a bar or reading nook.”

The home ended up as an ideal setup for living and entertaining on the main level. With approximately 3,000 square feet of space, the majority (2,200 square feet) is downstairs and the remaining 800 square feet is upstairs with two bedrooms, a bath, a den and balcony with a direct view of the river and Columbia’s skyline. The high ceilings, wide doorways and big open spaces make it feel even larger than it is. Strong architectural touches abound throughout, with heavy molding and smart finishes in every room. From the crystal chandelier to the piano alcove, this home was designed with the end in mind.

But even with all of the many features that were important in making this house the perfect home for the Millers, one room far outweighed the rest: the kitchen. “Our goal was very simple. We had a galley kitchen where we were that just wasn’t enough. We wanted to create a gourmet kitchen with restaurant quality equipment,” Larry said. So, they figured out what they really wanted in the kitchen first.

“It was important for us to have a commercial range with a commercial hood,” Ann said. “First of all, if you really enjoy cooking, a gas range is a must. The hood we have above the range, the motor is on the roof. You could cook anything in this house and never have any odor and the sound is very quiet.”

Counter space and storage were also key to the kitchen design. “We wanted lots of counter space. We both cook together, so we need to be able to spread out,” Larry added.

They have a huge pantry, which was an absolute must. They even expanded the pantry’s dimensions from the original design. “The saving grace of this kitchen is the huge pantry,” Ann enthused. “Everything goes in the pantry. We can keep a lot of things there that most people would have to keep in the kitchen.” The pantry is impressive, as a six foot by ten foot space with ten foot ceilings.

“For us, we tried to hide things to have open space as much as possible. We selected drawer dishwashers and a drawer microwave to keep it unobtrusive. The wine cooler and the mini bar fridge with ice maker were all easy decisions. The only thing we went back and forth on was the microwave warming drawer. It was very new at the time, so we weren’t sure about it. It’s worked out great, though,” Ann said.

Double was the order of the day when designing the Millers’ kitchen. Full size, double convection ovens were crucial to their cooking regime. “We didn’t want just a regular oven and a convection oven, they both had to be convection to handle our needs,” Larry said. Double disposals, a regular sink on the main counter and a prep sink on the island means both chefs have access to a sink with water. “This kitchen has been fully used since the first day we moved into the house,” shared Ann.

“We have all the toys we could want, so to speak. We haven’t wanted for anything for the nine years we’ve been creating meals for friends and family in this kitchen,” Larry said. There is even a grill on the patio that’s right outside the kitchen’s side door. “It’s like having it in our kitchen without it actually being inside,” he continued.

Ann and Larry are pretty diverse in their cooking and like to experiment. “We love to go to restaurants and have something, then we try to make our version of it. That’s the great thing about traveling, you learn to put fabulous dishes you have together once you get back home,” Ann said. She’s more the baker and Larry’s more the sauce person. “If you can make a sauce, you can put it on anything and have a great meal,” Larry said.

The Millers made the house, and the kitchen in particular, ‘people friendly.’ “Our choice was to leave it open as much as possible so everyone could be in there and it’s become the entertainment center,” he said. “It almost doesn’t matter what you have in the rest of the house, we all gravitate towards the kitchen where the action is. After giving it a lot of thought and living here nine years, there is nothing we’d change about it.”

The configuration of the eat-in kitchen includes a beautiful bay window, a long counter with a great end bar for impromptu meals, the separate island and the commercial hood over the gas range with built-in griddle. The Millers went with off-white cabinetry and oak flooring. The walls sport a golden Tuscan wallpaper for a comfortable, light feeling.

“I wanted this house to be light,” Ann explained. “We started cutting out pictures of ads and magazine articles; anything that would strike us. Pretty soon, we had a trend.” They selected off-white cabinets, and considered adding an antique finish, but ultimately decided they liked the cleaner look. For the granite countertops, black was off the table immediately. “We didn’t want black granite, which shows every fingerprint in the world. We had that in our previous house and knew it wasn’t going to be our choice in our new home,” Ann said. “Once we knew we were going with neutrals and golds, it was easy to pick the granite.”

The granite is a gold and brown beauty, which is easy to work on for food prep. You can you can put your hand on it and it doesn’t show every single mark like the darker versions do. The Millers were very thoughtful with the storage methods incorporated into the house design. Using the space wisely, they made sure to take advantage of every nook and cranny, adding turntables in the corners of the cabinets that would’ve had wasted space otherwise.

At night, the family gathers at the bar for most meals. “As a family, we eat in the kitchen and pretty much anytime we have five or six guests, we eat in the kitchen,” Larry said. But for dinner parties, they use the dining room, which has extra large proportions. The dining room is almost too big for six people. “Unless you have eight, it feels too big,” Ann agreed.

In the original plans, it was decided that an extra large dining room was needed. “In this wonderful room we created, we can easily put fourteen people in there if we put the other leaf in the table,” Ann said. “We’ve entertained a lot in this house and had a great time with it. Where we live and play the most is downstairs, with the patio overlooking the pool.”

When people talk about houses, you hear comments about the flow and the openness of the floorplan. In this home, the floorplan has an intuitive flow from room to room, which isn’t choppy. Ann appreciates the easy flow from the porch through the living room to the kitchen. “We’ve had 90 people for a cocktail party and it wasn’t like you were stuffed into a box,” she said.

Outside entertaining is easy here. The sound system is wired inside and out. The pool was built by Atlantic Pools, the same company who installed the water feature at the corner of Sunset Boulevard and the Gervais Street Bridge as the official welcome to West Columbia.

It’s a nice compact pool, heated for year-round use. Atlantic Pools also maintains the pool and its systems. “We’ve never had a problem,” Larry shared. They use the pool frequently. They even designed a downstairs bath with a shower so it’s not necessary to go all the way upstairs to get cleaned up after swimming.

Because there’s not a developable lot across from the Millers, there will always be a river view and a sunset view. Along the neighborhood streets near them, the crepe myrtles provide plenty of spring and summer beauty and their river and city view changes throughout the year as the trees transform along with the seasons.

The surprising thing they realized in living here is even though they’re so close to everything downtown, you don’t hear or see anything but the river and some of the roof tops across the way. It’s like being in a private enclave in the middle of downtown.

“Two Sundays ago, we walked to the Vista for lunch. We’ve walked to the Carolina baseball stadium before, too. This home is very convenient and the nice thing is, with the smaller lots, you don’t have the maintenance you have on a larger lot,” Larry said.

“We’ve always thought we’d live here forever. We love the house. There is nothing we would change, not one thing. From everything from where we put electrical outlets to what we put in the house, we did a lot of very good things that make it convenient and comfortable,” Ann said.