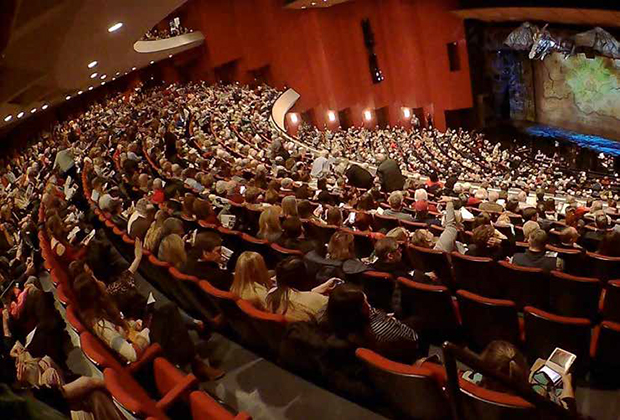 Terracio joined the Koger Center as assistant director in 2016 and shifted into his current position after the previous director, Michael Taylor, retired in 2018. He caught the theater bug many moons prior, however, as a fourth grader at Columbia’s Heathwood Hall when he saw a middle school production of J.M. Barrie’s iconic Peter Pan. He remembered watching the high school students pull the younger actors into the air using ropes and pulleys, simulating flight, and was hooked. He began participating in theater productions in middle school and continued throughout college at University of South Carolina, where you may be surprised to learn that he was a student of chemistry, and an honors student at that.

“I never thought I’d be a chemist,” he said. “Logic and the thought processes that are required to do well in the sciences and math always made a lot of sense to me though. I thought that calculus was one of the easier things a person could study. When you notice yourself naturally excelling at a subject that people warn you is hard, it stands out and so I just did what I was good at. So, I just followed the path of advanced science and math classes that I started taking in high school, but I never thought I would become a chemist. I didn’t see any jobs that people did as a result of getting those degrees that excited me and made me want to do them.”

Remaining true to his undergraduate sentiments, Terracio has never worked as a professional scientist, but he often sounds like one in conversation. “It’s all physics, just applied physics,” he said of theater production. “Moving masses around, moving various forces. Working with or against gravity to move things around.” (Middle schoolers taking flight to Neverland, for instance.) “There are so many elements to consider when making sure we are equipped to host a production or a performance. Climate control is important. It’s crucial that we maintain proper technical equipment. We can’t get Wicked to come if the roof is leaking or if the air conditioning is broken.”

After graduating from UofSC, Terracio took a gap year to travel and contemplate a career path. But after a year he was no closer to figuring things out, or so he thought. He got in touch with a now closed Columbia-based traveling theater company, Aquila Theater, that he’d interned with in college and took a job with them thinking it would be a good way to earn a little cash. The planned six-week gig turned into twelve years of work, at the end of which he realized he was invested in the field. “I worked as many different roles as possible within the company. That’s basically how I got to the position I’m in now.”

When his time with Aquila Theater ended, he found himself in New York City, freelancing for a while and then as the Production Manager at Jazz at Lincoln Center – a position he held for a little over four years. He applied for the assistant director position at the Koger Center from Jazz at Lincoln center in August of 2016. “When you’re freelancing in NYC, you basically take any job anyone will offer you. Because there’s so much work going on in this industry in NYC, people aren’t as specialized as you would think. Whether you’re working on an opera, or a play, etc. – they’re approached pretty similarly from a production standpoint. The kind of training I got wearing so many different hats is good if you are running a building, which is what I am doing now.” The Koger Center’s problem solver in chief explained, “My job to support my team is solve problems that haven’t come yet so that they never exist. I also solve problems that people don’t realize are problems. A problem doesn’t have to be a crisis. Sometimes problem solving is simply opening someone’s eyes to possibilities.”

Terracio’s goal is to offer the widest variety of artistic performances as possible at the Koger Center. “The wider variety we can host the more of a reach we have. The more variety we have the more people come into the building, and the more people we reach the more of audience we will have for any of our acts, including the local performances. We can even play a part in attracting people to relocate to Columbia. When someone is considering relocating to a city for work, they ask themselves, ‘Do I want to live in this place?’ A lot of times these decisions are being made from the heart. The cultural scene can play a big part in this decision-making process.”

A member of the Shandon community, Nate is husband to Allison Terracio ­– a Richland County Council Member (District 5) – and father to Van, a sixth grader at Midlands Arts Conservatory. In their free time, the family can be found biking together and spending time with their pet cat, Squeaky.

FAVORITE QUOTE: “All the world’s a stage, and all the men and women are merely players.” – William Shakespeare, As You Like It