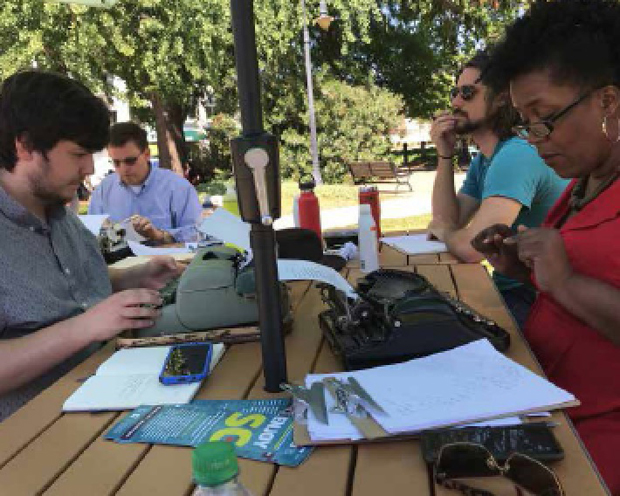 When Mayor Steve Benjamin confirmed USC Professor Dr. Ed Madden as inaugural poet laureate for Columbia in 2015, he knew he had found a gifted kindred spirit who could articulate his own aspirations for the community. “Many often fail to see the connection between the arts and the economic vitality and prosperity of a great city. We’ve understood the inextricable bond between the two and it is a primary reason that I decided to appoint a City Poet Laureate and to name Dr. Madden our first,” Benjamin said. “Ed has been intuitively connected to the spirit of Columbia and the values of diversity & inclusion. We are thankful to have benefited from his gift.”

The city laureate’s primary purpose, according to the resolution passed by the city, is to promote poetry and literary arts, particularly among young people. In addition, Madden has used poetry to tell the story of the city, to imagine who we are and who we can be as a community.

This past March, when Benjamin unveiled the city’s new official flag, Madden described the flag as:


another blue beyond us,

and beyond that a light

The horizon is who we are.


The poem captured Benjamin’s sentiment at the time when he said the flag represents the city’s progress, diversity, and destiny. (Read the full poem at: columbiapoet.org/2020/03/10/flag/.)

Since his appointment, Madden has written poems for special occasions such as the mayor’s annual state of the city address, poems that often echo the mayor’s vision. For example, to accompany a 2019 address to the city, Madden presented “Better Angels,” a poem in which he echoed the mayor’s frequent call on “the better angels of our nature,” as inspired by the memorable phrase in President Abraham Lincoln’s 1861 inaugural address.“The angel hovering over is not the angel / of history,” the poem ends,

in front, not what’s behind them. The angel wants


to fix the bridge, the missing step, the broken

rail, but she knows she can’t. To do that 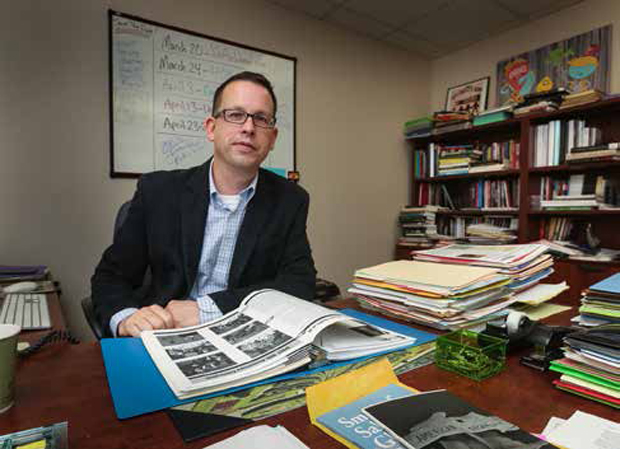 Although prolific in his poetry, regularly appearing in prestigious publications, Madden takes particular pride in taking poetry off the shelf and literally putting it on the street, introducing the art form to new readers. One of his favorite projects has been the “Rain Poetry” project. As described last year by David Travis Bland of The State, Madden solicited poems from local writers, including several young writers, which were stenciled on sidewalks in the Vista, on Main Street, in Five Points and around USC’s campus as well as the State House. The material with which the writings were painted on the ground only shows up when wet. So when it rained, the poetry by selected local writers popped up on sidewalks. They were meant to be temporary in nature, worn away eventually by city foot traffic.

“One of my goals as the city laureate is to think about poetry as a public art, and another goal is to create venues for the voices of local and young writers,” Madden said at the time.

In his city projects, Madden has worked closely with Lee Snelgrove, executive director of One Columbia, a nonprofit promoting the city through arts and history. Of Madden’s contributions, Snelgrove said, “In his role as Columbia Poet Laureate, Ed has created new opportunities for artists, particularly young writers, and emphasized how vital their voice is to the culture of our community. He has also been in a position to respond artistically to key civic moments, helping citizens to more deeply consider what it means to be a Columbian. Because of Ed's work establishing the foundations for what a city poet laureate can be, public participation in cultural experiences will continue to be an integral aspect of Columbia's identity."

As for his own widely published poetry, “How to Lift Him,” written while he was caring for his terminally ill father, is one that he finds most meaningful. “It was a difficult time, and I think anyone who has experienced something like that knows that you just do what you have to do,” Madden said. “But the poem resonates for me now, too. I think about how we are learning we are all connected, how we need to do what we can to care for one another.”

He shared his memories of that time with poet Kwame Dawes for a 2018 issue of the Michigan Quarterly Review on caregiving. Dawes, professor of English at the University of Nebraska-Lincoln and former USC colleague, said, “Madden is a poet – a man who has fully committed to the life of engaging the world through the celebration of language and the pleasures of constantly seeing some meaning and value in the world around us, even when the world is filled with cruelties and the inexplicable.”