This Tudor Revival downtown home had great bones, but it needed skilled collaborators to bring it into 21st Century livability. 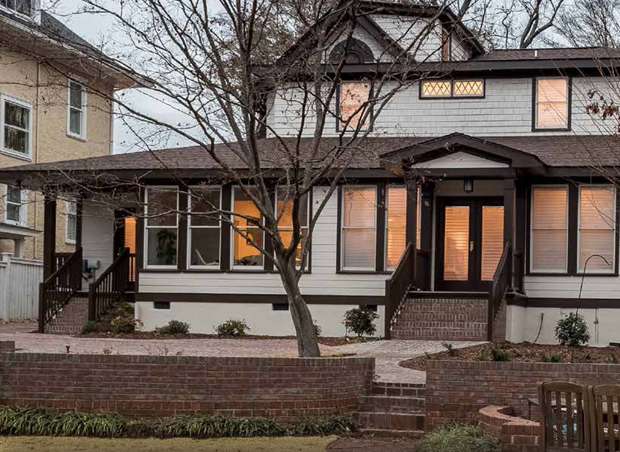 When two University of South Carolina professors couldn’t decide whether a 1903 downtown house could be updated for their specific needs and aesthetic sensibilities, they brought in architect Michael Haigler to walk through the home and discuss its positives and negatives.

“The couple needed room for their growing family, and although they loved the location with its double lot, there were a number of issues, including little closet space, not enough bedrooms, and a jumbled, mismatched rear of the home,” Haigler explained.  “They were intrigued enough to commission a plan to show how renovations would make it a seamless combination of old and new.”

It didn’t hurt that Haigler had done work for other homeowners in the neighborhood, in collaboration with Ward Dunn of Abstract Building & Renovation.  Guy Sullivan, of Avanti Interiors, was the third professional in the triumvirate that helped the couple turn their vision into reality.

After about two years of returning to the house several times “for one more look,” the couple decided to move forward with Haigler’s renovation vision and the professional team. Today, more than a year after work began, the family is happily ensconced in the home, which kept its original look from the front, but incorporated about 50 percent more living area in the rear.

It didn’t happen without spirited discussion among the architect, builder, designer and new homeowners.  First there was art – lots of art.  The husband’s late grandparents were well-known printmakers and painters whose works are included in the permanent collections of galleries and museums nationwide. Most of the couple’s paintings, woodcuts and lithographs came as family gifts, though a few they spotted and purchased on eBay.  The renovation had to accommodate wall space for the artwork, large and small, with lighting and positioning to show off the magnificent pieces.  Somehow, it all works in a house that has retained its historic charm, while showcasing art with a decidedly modern bent.

“It’s a classic home with gambrel roofs, heavy timber, stucco and classical columns,” explained Haigler.  “The floor plan had a traditional central hall and stairs, and double rooms on each side of the ground floor and second floor, but there weren’t enough bedrooms, and there was no den or playroom.”

Complicating the job was a kitchen that had undergone several renovations but didn’t fit the family’s need for a more open floor plan. At the back was a large yard and a pool in need of work.

There were foundation issues, an oddly placed chimney, low ceilings and a kitchen in desperate need of a new door to the central hall.  The plan focused on the back of the home and had to be coordinated with the Design Development Review Commission since the house is on the National Historic Registry an located in a protected neighborhood.

The back wall of the home was removed, allowing expansion of the interior rooms. The builder discovered many challenges, including walls that were not square, an oddly shaped chimney, and water damage.  “The walls in the back were three inches out of square, which forced us to remove and build an additional nine feet of house,” builder Ward Dunn explained. “Other issues we discovered were sloping floors, electrical wiring that was mostly old “knob and tube” style, plumbing and HVAC issues.”  Dunn also repaired old termite damage and added concrete block piers in areas under the existing home to strengthen the floor framing.  These unseen and necessary elements were completed to bring the house into 21st Century efficiency and safety standards, and helped make the addition an appealing extension to the original home.

The kitchen now opens into an eat-in breakfast area, with a large reclaimed wood table, and an old church pew for seating against the back wall.

The back entry has cubbies for coats, shoes and electronic charging. The laundry area and a small bathroom are perfect for a quick run inside from the pool after a swim, or perhaps depositing wet clothes efficiently.  There’s a small sun porch that offers a view toward the closed-in backyard, brick-paved parking and a resurrected pool area for entertaining and summer fun.

The den expands from the central hall and it’s filled with windows that let in the light and nourish a healthy collection of plants.  A large, semi-abstract painting anchors the room and is the first piece seen after entering from the back. The formal living room is now a music room with a grand piano and stringed instruments. A small walk-through space holds more art and books.

Interior Designer Guy Sullivan, of Avanti Interiors, helped the owners create their much-desired livable home, avoiding clutter and highlighting their taste.  “For this project, I enjoyed creating an interior that is high in functionality while embracing the ‘art’ of my clients’ lifestyle,” he said.

Throughout the first floor, original wooden floors were returned to their natural beauty. Kitchen tile was removed, and reclaimed wood warms the kitchen and den, complementing the original flooring.  Low ceilings and strange nooks disappeared.  The new den incorporates coffered ceilings, which look quite comfortable against the older rooms’ dental moulding.

Since so much care was taken to match interior trim details, it becomes a bit of a guessing game to determine what’s original to the house and what’s been added.  The original dining room is now a library, housing a portion of the homeowners’ extensive book collection. An old porch that was converted to a sunroom by previous owners is now a playroom for the children.

There are two stairwells to the second floor.  The “family” staircase is in the kitchen, while the large staircase from the central hall ascends to a landing, where the largest painting in their collection is on display. The upstairs landing showcases original cut wood balusters that must date from the early 1900s.

The large addition to the rear of the house on the first floor is balanced on the second story with a luxurious master bath/shower, toilet and vanities.  Two walk-in closets provide plenty of storage for clothing and shoes.  A child’s room has a new bathroom, and lots of play area.  The guest bedroom and office, plus a large central bathroom, complete the second floor, but there’s more to be seen.

A fairly steep stairway off the upstairs landing leads to a third floor, originally an attic.  Today, it’s a playroom, with additional storage created especially to house and protect the artwork not currently on display.  A walk-in attic provides still more family storage.  Windows on the third floor were found and reclaimed to go back into their original spots, bringing great light into the toy-filled room. It’s a perfect hideaway for a child – of any age.

Back downstairs, it’s clear that the goals have been met.  The house is historic in architectural details, yet modern in amenities. It’s very livable, with play areas that can be overseen by parents.  The wall space is ample (yet already filled with art that is both beautiful and personally meaningful).

Jill Moylan, Broker Owner of Home Advantage Realty, worked with the homeowners over the two-year decision process.  She had the idea to bring in an architect to analyze the options.  It was a good decision. “The great joy of real estate is finding a perfect house for a buyer,” she shared. “These homeowners were ideally suited for this home, with the vision to see both what had been and what could be.”