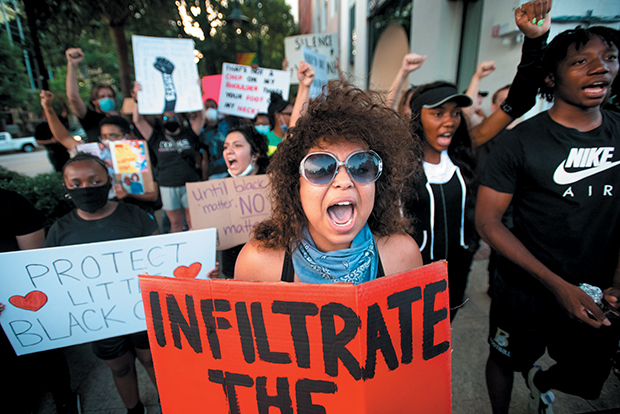 The images by Sean Rayford on display at the Columbia Museum of Art is one of the few times that work by the Columbia photographer has been formally exhibited.

It’s not that Rayford doesn’t consider his work art, but “most of the work that I am most proud of people don’t want to hang on the wall,” he says.  Rayford considers himself principally a photojournalist. “A lot of the stuff that I shoot looks like news photography because it is, and that is not something people put on their walls.”

Four of Rayford’s photographs are being exhibited as part of Hindsight 20/20. The documentary show, which chronicles 2020, a very difficult year in American life, includes not only the work of Rayford but also photographers Crush Rush, Thomas Hammond, and Catherine Hunsinger, all from Columbia, and Hector Vaca Cruz from Charlotte.  Hindsight 20/20, which opened July 9, is on display until Oct. 24 in the Guignard Gallery on the museum’s first floor.

“For civic- and social-minded photographers, like Rayford and the others,” the museum says, “the streets and corners of our communities are their canvas, and last year’s pandemic-to-protest moments compelled documentation.” Hindsight 20/20, “looks back at these historically poignant moments through the lens of five photographers whose work is a means for us to reflect, process, and find clarity.”

Rayford’s photos include images from a Black Lives Matter protest march in Columbia in May of 2020 that followed the death of George Floyd at the hands of Minneapolis police officers; a clash of protesters at Stone Mountain, Georgia, in April 2020; and a protest in Columbia, also in April 2020, over government ordered closures as a result of the pandemic.

Jackie Adams, the museum’s director of art and learning and the show’s curator, said, “Sean’s photography transcends the still capturing of people and place. His images come to life by creating a strong sense of curiosity around what came before, during, and after; you’re left wanting to know more.” 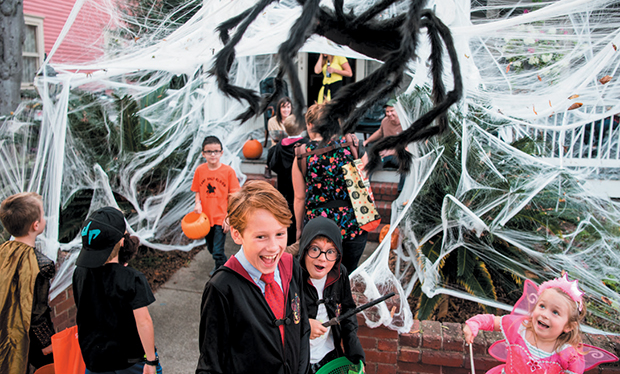 Rayford grew up in rural Mount Airy, Maryland, a 45-minute drive to Baltimore and an hour to Washington, D.C. After high school, he came to the University of South Carolina, because “I wanted to go somewhere warmer,” intending to study computer science. But, “I hated computer science classes.” With a love of photography fostered in high school, he became a media arts major by default since there was no photojournalism major at UofSC at the time and graduated in 2001.

When he arrived at UofSC, “one of the first things I did was walk up to the newspaper – The Daily Gamecock and say, ‘Hey I’d like to take pictures for you.’” It was never his intention to be a professional photographer or photojournalist. “It was just something that I liked to do at the time, and I could get up front for concerts. I kind of always referred to it as a hall pass. It was the same thing in high school. Having a camera in my hand, all the people in charge of the halls knew I worked for the newspaper, and I could kind of go wherever. You assume this role and it can take you to places.” It has certainly taken Rayford places.

After graduation, he worked for a while at the legendary Sounds Familiar record store in Rosewood and tended bar at New Brookland Tavern. All the while he continued to take photographs, lots of photographs, mostly of concerts and local musicians. His work soon caught the eye of photographers at The State newspaper, and he began freelancing, mostly photographing high school sports.

That beginning has led to a lifetime vocation as a commercial photographer and freelance photojournalist. He has taken photographs not only The State, but also for national and international media outlets such as The Associated Press, The New York Times, The Wall Street Journal, The Washington Post and Getty Images. He has captured images from major news events not only in South Carolina but also around the Southeast, from natural disasters to protests to major political events. Much of Rayford’s work can be viewed on his website at seanrayford.com and also on Soda Citizen, sodacitizen.com, his visual storytelling platform.

In addition to his work as a freelance photojournalist, Rayford also has a large commercial photo clientele, including Riggs Partners, MidCarolina Electrical Coop, Experience Columbia and Proctor & Gamble. He also does portraits and the occasional wedding.

“I am definitely not a full-time photojournalist. I say that is probably less than half of my work, if not more,” Rayford says. “A lot of my work supports my ability to be a photojournalist. There are lots of artist who have done types of work that they weren’t necessarily interested in doing so that they could do the thing that they really like to do. I definitely see myself in that vein.”

Rayford says he always tries to use the visual principles of art in making his images, “but at the same time I have another job, another task to do. You’re telling a story and representing what is going on in front of you. So, you have to balance those two things.”

The museum’s Adams says that one of the things she respects most about Rayford “is his dedication to a creative life that tells many stories, giving us opportunities to reflect on ourselves and what it means to shape our world, a central concept to the Hindsight 20/20 exhibition.”

You have to represent reality, Rayford says.