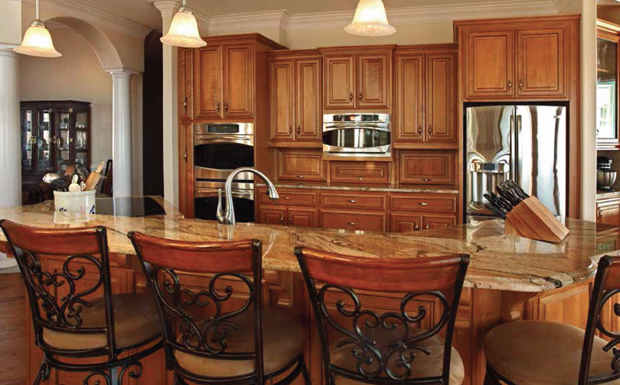 The lure of Lake Murray brought Paul and Diana to their retirement destination in grand fashion. They’ve found the perfect view and framed their gorgeous custom home brilliantly to maximize the presence of the lake’s beauty in virtually every room.

In the months leading up to the home’s completion in October 2012, the couple developed a close relationship with Pete von Ahn, their genius architect and Rodger Parsons, their highly skilled builder, to collaborate on this project.

“We bought our first house on the lake in 1984, a fixer upper. With three kids at home and to build the house we wanted, we didn’t have the money back then,” Diana said. They did well with their fixer upper and took their profits and moved to Washington State.

The couple investigated a number of house plans in anticipation of building. They chose to work closely with their architect to maximize the space and the views. “Pete is very accommodating and had many great ideas,” Paul said.

A potential issue was putting a turret with a bump-out in the master bathroom. “Paul thought it would make the property not work and bring us too close to the property line,” Diana said. Her position was that it wouldn’t cause any problems as long as it didn’t run into an easement. “As we’re talking about it with Pete, he draws up how it would look without the turret and then he drew it again, the way I wanted it. Paul loved it. Having Pete do a rough sketch of our ideas when they were different helped resolve the issue,” Diana concluded.

The placement of their front door is a good example of how their divergent ideas were resolved through Pete’s assistance. “I like symmetry and wanted the front door in the middle of the front elevation,” Paul said. “But when Pete drew it out, and it was off center, it made the whole entryway work.”

To bring their house plans to fruition, Rodger Parsons won over Paul and Diana through strong references and a history of custom build projects. “We interviewed several builders and asked for input from Kit and Johnny Oswald, real estate agents with Coldwell Banker Residential Brokerage. They gave us a few names to consider,” she said.

The real estate market in 2011 was coming back from a low point. “When we met with Rodger in 2011, custom builders were hungry. What really sold me on Rodger was that he took us to a house he built for a couple and it was a quite interesting and unique home,” Diana continued. “The woman took me aside privately and said to me, ‘you cannot find a better human being to build your house.’ ”

Rodger impressed Paul and Diana by keeping his crew on task and responding quickly to any comments or concerns they had throughout the construction process. “He is a very hard worker and was always at our job site by six or six thirty every day. I’d have an idea and come over around seven in the morning and he would already be here,” she said. “He has a good crew and people who’ve worked with him for years. He would immediately respond to my inquiries.”

As you move from the right side of the home to the left, you experience the quality craftsmanship in every space, great and small. The grand master suite with fourteen foot ceilings, heavy molding and a spectacular, direct view of the lake, is an incredible owners’ retreat. You can step out onto the private screened porch with a slate tile floor and enjoy a cup of coffee as you prepare for the day.

The floorplan was designed to accommodate aging in place, with wider hallways, doorways and little to no transition between rooms and flooring styles. This plan is evident in the master suite, as you walk through the wide, connected passageway leading to the master bath. With large gleaming tile squares underfoot, the hallway has space-saving pocket doors for closets used here and other locations throughout the home, remaining hidden until needed. A no-barrier entry into the large shower compartment gives plenty of space in a truly unusual configuration. The left wall is opaque wavy glass that draws your attention away from other features in this room with its serious cool factor. The divided vanity is an unusual solution that works to create the symmetry needed for balanced quarters. Beyond a high ceiling, the bath has a turret that gives the multi-faceted ceiling the feeling of great height.

Coming out into the main living area, the dining room is found on your left, just past the offset front entryway. Bounded by elegant columns and arches, the recessed rope lighting in the tray ceiling gives a soft glow, with a central chandelier that shimmers in bright silver. “The gal at the Lite House helped find it,” Diana explained about the striking light fixture. “This was one of the last pieces I needed, and I wanted something to really show off the dining room.”

The representative from the Lite House did a site visit to consult with Diana and was instructed to find reflective lighting, along with something that used a bit of crystal. “She started showing me options, and the fixture we chose leads up towards the beautiful ceiling. The outside lights also have reflective pieces so that the house has the look we wanted,” she said.

The dining room suite is the centerpiece of this space, with a light pecan inlay surrounded by a darker wood. The Asian influence in the design appealed to Paul and Diana, as Paul’s sister-in-law is Japanese and had many furniture pieces they both admired.

The openness of the plan gave them the views they wanted but less wall space. “We wanted it to be open and the only downside is that Diana and I couldn’t find enough walls on which to hang grandchildren pictures,” Paul joked. A massive floor to ceiling wall of windows is the highlight of the family room, and the fireplace brings warmth when needed.

The kitchen is angled as well and open for cooking and entertaining. Diana had definite constraints for the placement of the kitchen’s major elements. “The counter would’ve been out even further, but we pulled it back just enough,” she said. “We receive guests and it’s worked out great. We wish we’d had more space in the family room, but when there are people here, we expand to our outdoor space.”

Professional quality appliances make cooking in this kitchen a pure joy. A Thermador flat cooktop with a rising exhaust panel for the downdraft to the outside is on the kitchen island, facing the lake. They made use of every nook and cranny in the kitchen, with short width, long depth drawers for spices in convenient spots for the family chef to use. It’s organized alphabetically.

The drawer pulls are a brushed satin nickel twist that Diana spent hours researching to find the perfect look to tie the overall home design elements together. Warm brown and cream granite slabs were located from a supplier in Charlotte, North Carolina and are a solid compliment to the color palette of cream, light honey and more golden hues.

The house actually would’ve stopped right in front of where the Florida room begins as originally planned. But, the architect proposed another turret, to mirror the front elevation, and filled it with window walls. “We would’ve put a fireplace, but we would rather have a wall for artwork,” Paul shared. The paint here is a seafoam greenish blue, but it took their painter three tries to achieve the right hue. The final result is a laid back vibe with stunning views all around.

“We had heat issues, so we had one of the main windows covered with a tinted film to mitigate the warmth,” Diana said. Paul concurred that they don’t run a lot of heating or cooling in this room, except for a little in the summertime. They have Jeld-Wen windows throughout the house, predominantly casement windows that allow them to easily swing out for ventilation.

The Florida room is over a giant puzzle of space below that was intended to be a place for a dog shower, but became much more complicated. Diana knew their dog would be a lake dog, so she wanted to have a concrete pad for a dog shower. “We were unaware of how much fall we’d have on our lot, so the builder worked a solution to include a full bath that’s not only a big dog wash, but is accessible when entertaining outside at the pool or on the big water of the lake,” Paul said.

Diana doesn’t like straight lines and her application of curves and turns can be found in every aspect of the home. “I had a leftover piece of granite and thought I’d use it for the pool bath counter in the shape of the lake.  We ended up using it in the hall bath instead,” she explained. The granite shape wasn’t quite able to match the lake’s outline, but it’s close. “My friends and family are very modest and didn’t want to use the hall bath, as they felt you could see through the door when the light was on,” she said.  The wood framed door has an opaque glass inset with a strong pattern. She tackled the problem with creativity. “So that they don’t have to turn on the overhead light when they’re in there, I installed a glass bowl and it’s lit from below,” she said. Family and guests can close the door and the soft light is just enough.

Across the hall from the half bath is Paul’s “rocket ship,” a floor to ceiling rack of smart home automation with over four miles of wiring installed to handle everything from lighting to television video sources and more.

The upstairs has come to be known as Paul’s tree house. This extension of the vertical space gives arguably the best views in the home of the lake. His office is located here, along with a series of built-in bookshelves that contain a large library of titles, ready for reading by the calm of the water.  There’s an extra bedroom, a full bath and plenty of additional storage, leading right to the walk-in attic access.

Paul and Diana have incorporated many of the ideas they’ve had over the years into this home, creating for themselves the ultimate lake retreat.