Meet Rev. Marvin I. Lare, whose full life includes ministry, activism and a front row seat to history in the making. 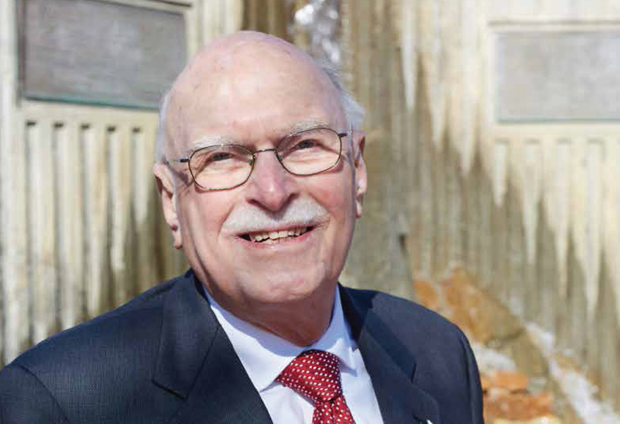 As a lifelong civil rights champion and social activist, the Rev. Marvin Ira Lare has witnessed some of the most pivotal events of the last century in the fight for racial equality and social service.

As pastor of a Methodist church in the inner city of Los Angeles, he was active in the Western Christian Leadership Council. In 1965 he went to Selma, AL. and participated in planning and strategy sessions with Dr. Martin Luther King, Jr. and others for the Voting Rights March to Montgomery. In 1968, he attended King’s funeral in Atlanta.

Most recently he interviewed over 100 activists across the state, for Champions of Civil and Human Rights in South Carolina. After retiring from the S.C. Department of Social Services’ research and planning division, he began work on the historically invaluable five-volume series, a project of the USC Institute for Public Service and Policy Research, encompassing the modern civil rights movement 1930 to 1980.

The first volume, Dawn of the Movement Era, 1955-1967, was published in 2017 by the USC Press. His rich, intimate portrayal of people in their own words allows the reader to get to know them personally and appreciate their struggles in moving the state forward.

It begins with the landmark 1954 Supreme Court ruling, Brown vs. the Board of Education, which declared racially segregated schools unconstitutional. In South Carolina, resistance prompted boycotts of merchants by the local NAACP and some of the earliest mass movement protests in the country. The collection features oral histories from major leaders such as U.S. Rep. James E. Clyburn, educator Septima Poinsette Clark and the Rev. I. Dequincey Newman, as well as small-town citizens, ministers and students who might have been lost to history without Lare’s work.

For Lare’s impressive undertaking, students and scholars of Palmetto State history will be indebted. Yet, truth be known, South Carolinians, especially those in the Midlands, owe this trailblazer much more. His multi-volume civil rights history preserves accounts of deceased or aging leaders, but it’s clear that Lare himself also has a story of his own service that deserves to be told. The retired civil servant has shaped poverty programs, promoted low-income housing, supported small businesses, and expanded health care coverage. And that is just to name a few of his countless endeavors. He helped start the local Meals on Wheels Program, state hospice programs and the umbrella group for South Carolina’s non-profit organizations.

Ever since a youngster on an Ohio farm, Lare has had a heart for the less fortunate. Recently, he reminisced about pivotal influences in his life and his most compelling causes. An older sister, Norma, with a gift for oratory, spoke against capital punishment with a compelling voice, imbuing him with a social conscience. An influential youth group encouraged him to take stands, often on emerging issues of the day. A recent morning interview over coffee at a midtown restaurant right before Martin Luther King Day stirred memories for him. Although an articulate minister and a persuasive advocate, he is modest and soft-spoken when speaking of his own accomplishments.

Recalling his friendship with King, he said, “I remember the first time I saw him when he spoke at the University of Southern California, not far from my church in Los Angeles, in the early 1960s. I had no idea at the time what a significant person this mild-speaking preacher would become, but later, of course, I came to know what a powerful force he and his non-violent commitment was to be.”

After King’s assassination in 1968, Lare flew to Atlanta with fellow ministers for his funeral. “His death was more devastating to me than that of President Kennedy. A small group of us from Dallas, where I was director of an inner city parish, flew on a chartered plane a philanthropist provided. At the church, somehow we were escorted into the church a few rows from the front. Later I found a vantage point on the stairs of a small building beside the street where his cortege passed, the farm wagon pulled by a couple mules. Now, given the current climate of some of our national leadership, I am so glad we have an icon like Dr. King to whom to look.”

Lare has been driven since his youth by recognizing a need and striving to meet it, whether that be housing, hunger, drug abuse, medical care or public reform. “Being able to start something new and serving an unmet need,” have been among his satisfying endeavors, he says.

Coming to Columbia in 1969 as executive director of the interfaith organization Community Care, Inc., Lare quickly became a leader working for racial equality and social justice on both local and state levels. Among those influential early organizations was the interracial Luncheon Club, a quiet behind-the- scenes leadership group that continues to meet the first Friday of every month.

Under his leadership, Community Care set priority action efforts with local churches. “We initially identified our highest priorities as drug abuse, school integration, aging services and the needs of the homeless.”  The Drug Response Operation was formed. It provided a crisis telephone hot-line and walk-in center, “Maudy’s Bosom.”  Treatment services were developed, including a halfway house and a methadone maintenance clinic, with the help of the Richland County Health Department. Eventually the DRO merged with the alcohol treatment programs to form the current Lexington-Richland Alcohol and Drug Abuse Council (LRADAC).

In a time of economic recession, Community Care, Inc., formed the Cooperative Ministry which continues to this day. The local Meals on Wheels and hospice programs stemmed from those early efforts with Lare serving as the first president of the South Carolina Hospice Association.

As a pioneer for hospice, Lare recalls, “Community Care continued its concern for the elderly and in the late 1970s we started support groups for caregivers. From that, we developed a Robert Wood Johnson Foundation grant for Coordination of Services for the health-impaired elderly. This led naturally to concerns for the dying and their families.

“We visited other hospice initiatives around the country and participated in the founding of the first hospice in the state at what is now Palmetto Richland Baptist. The concern was being developed in other parts of the state and we founded Hospice of South Carolina as an association of hospice programs. It was not an operating hospice program itself but fostered the development of hospice programs across the state.”

As a lifelong minister and public servant, Lare, with his leadership skills, knows that organization and vision are key to results. What is now known as Together SC, formerly the South Carolina Association of Non-Profit Organizations (SCANPO), was formed along with the United Way largely through his efforts.

Volume II of Champions of Civil and Human Rights in South Carolina focuses on “Ramifications and Reflections of the Movement Era 1955-1967.” Three other volumes consecutively will cover “Before the Movement Began 1930-1954;” “Birthing of a New Day 1968-1980;” and “Lessons Learned and Promises to Keep 1968-1980.” The ambitious project by USC has been jointly funded by the South Carolina Bar Foundation, the AT&T Corporation and the South Carolina Humanities Council. He credits his late wife, Patricia Tyler Lare, who died in 2014, for her patience and support in seeing that these stories are not lost to history.

“Partnering with dozens of historians and leaders across the state to tell the stories of ‘Champions’ has been the most rewarding experience of my long and varied ministry. Retrieving materials from the Library of Congress, Howard University and the South Caroliniana Library has been among the most challenging tasks of my life,” he said. “Now I am working on a common lectionary, pondering, ‘Life, Love and Being Itself,’ to bring together people around the world.”