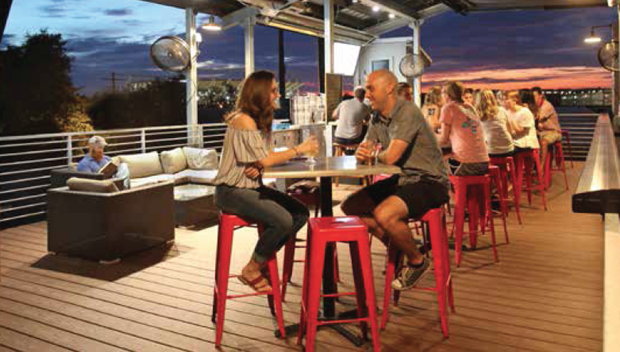 Columbia’s food and beverage industry is growing rapidly, and River Rat Brewery is growing right along with it. Located on Shop Road near Williams Brice Stadium, River Rat represents the three rivers running through Columbia and the historic workers that have worked along the rivers over time. Head in to taste the ever-changing craft beers paired with delicious food, take a tour of the brewery, or visit one of the many outdoor areas or taproom.

With beer to satisfy your thirst after a long day, River Rat prides itself on brewing with amazing taste. There are a variety of beers to choose from depending on your taste. Owner Mike Tourville didn’t want to stop there. As Columbia and brewing laws have changed, so has River Rat. “Columbia is one of those little interesting cities where there’s a lot going on in food and beverage, and we’re not just a brewery anymore. We are a brewpub,” says Tourville. Now open for lunch during the week, you can visit on your break and be in and out in thirty minutes, or stay longer and enjoy their outdoor seating, taproom or rooftop bar. River Rat is also very excited about a beer called Winter Warmer, described as a spiced winter ale, full-bodied and brewed with cinnamon and sweet orange peel. Several barrel-aged dark beers coming out of the Sleeping Barrel Cellars are worth a try.

The beers pair with delicious, in-house smoked barbeque and eats such as tacos, nachos, sandwiches and more. If beer isn’t your taste, sip on restaurant-quality wines you won’t find in stores or Prosecco pops that will, “change your life.” There are several pop flavors to choose from, including strawberry-basil, dunked in a refreshing glass of Prosecco. With a newly introduced liquor license, River Rat also has frozen drinks and a punch tap that changes out seasonally. Recipes include Bahama Mama rum punch, hard cider, bourbon punch and more. There truly is something for everyone.

Tourville also prides himself on being part of the community. He wants everyone to feel welcome to socialize at River Rat, so families, including small children, and dogs are welcome. Families and leashed furry friends can spend time outside in the gardens or seated areas relaxing and playing. “We’re different than everybody else. We have the family environment and we have the grassy area where the kids play,” says Tourville.

Adults can slow down by climbing up the iconic silo to the rooftop bar and admiring the view of the city and Williams Brice Stadium. Many planes from the Columbia Metropolitan Airport go by, so don’t forget to look up between sips to see them fly overhead.

The beer and being family-friendly aren’t the only things that set River Rat apart from the competition. Between weekly specials and events, there is always something to entertain at River Rat. Weekly specials include Taco Tuesdays with taco flights for the tasting. River Rat is now featuring “mini tacos” which are smaller than the menu staple, and come in chicken, brisket or pork. At just two dollars each, you can try all three. There’s also Wing Wednesdays with wings big enough to stuff the belly. The specials include discounts on wings and draft beer. Tap the memory bank with Thursday night trivia and grab your River Rat t-shirt on merchandise discount Fridays.

The events River Rat enjoys so much include delectable oyster roasts featuring large oysters, slaw and barbeque. The oyster roasts are held three times a year on the back patio. It’s forty dollars to enter and all your food and oysters are included. There’s also an authentic, annual Oktoberfest with German fare and beers. Guests dress the part while eating brats and schnitzel. They also host a Halloween party, including costumes. You can dress up with friends or family and enjoy the festivities and costume contest.

In the cooler months, pop over for outdoor movie nights and more, all of which are family friendly. The Rat Pack is also excited about an upcoming beer and Christmas cookie pairing. Register ahead of time to secure your sugar rush. There will be cookies and milk for the kids, and possibly a surprise, white-bearded guest. You can find the schedule of events on River Rat’s social media, including Facebook, Twitter and Instagram, or in Free Times. You can catch information on upcoming events and specials, and see pictures of the food and upcoming beers. You might even see some guests enjoying the brewpub, even the fluffy ones.

Also, don’t forget about River Rat for your next event. The deck, patio and rooftop are available rental spaces you can use for your semi-private parties, meetings or other festivities. Contact events@riverratbrewery.com for more information about space rentals.

River Rat is more than just a brewery or brewpub, it’s where memories are made and friendships can grow. Head to River Rat for your next night out or special event.