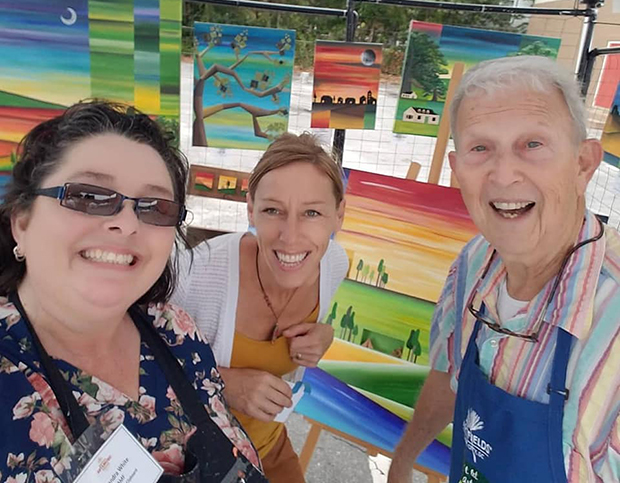 Get ready for the return of the Rosewood Art & Music Festival Saturday, Oct. 15 from 11 a.m.-6 p.m. After a two-year pandemic hiatus, the festival, now in its 11th year, is back with the same vibe but a new location at Rosewood Park and South Holly Street.

Founded in 2010 to promote the Rosewood and Shandon neighborhoods, the event has evolved into a major event with national appeal. It attracts talent from across the nation, yet still keeps its local flavor as a great festival for art and music lovers.

“We are so excited to bring this festival back after the pandemic,” says Festival Director David Britt. “The event is an opportunity to bring together some of the Southeast’s most talented artists. It also gives artists access to some of the area’s most discerning art collectors - access that would typically be reserved for artist that are displayed in art galleries.”

As a major thrust of the city-wide effort to promote the Soda City’s cultural scene, Britt says, ““It has been a great pleasure to see an event that brings so much artistic talent together thrive in the City of Columbia.” The full music lineup will be announced in September.

Admission is free. Attendees are invited to bring blankets to enjoy the grounds of Rosewood Park. Craft beer and food will be available for purchase. Alcohol consumption will be limited to South Holly Street and banned from Rosewood Park. No dogs are allowed. Concealed weapons are prohibited at the event.

Founded in 2010 by Forrest Whitlark and Arik Bjorn, the Greater Rosewood Merchants Association, which also presents the area’s annual Crawfish Festival, became the festival’s sponsor in 2017. The scope and budget have expanded, providing more live music, increased prize money for artists and a more robust marketing budget. Proceeds from the festival will be used by the Rosewood Merchants Association to beautify and improve public safety along the Rosewood Drive corridor.

Festival Art Director Alexandra White says, “The event reaches beyond the southeastern United States in talent, yet still keeps its personal and relaxed atmosphere to provide one of the best small festivals in the country. The mission is to create a balance of visual and performing arts from some of the best artists, both homegrown and from around the country, showing original works of art, with a price range to appeal to every type of collector, from avid to newbie, while introducing new and exciting talent for art patrons to explore. The event also showcases some of the region’s best up-and-coming musical talent.”  There will be “plenty to see and do,” she says, with interactive artistic opportunities for people of all ages and skill sets to create, observe, collect and celebrate.