This respected Riverbanks director will leave the zoo and gardens in great shape for his successor. Riverbanks Zoo and Garden is an amazing destination that has only grown better with every passing year. Thanks, Satch. 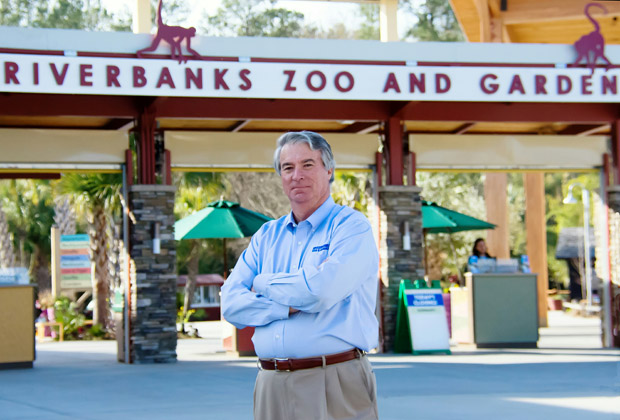 Palmer “Satch” Kranz, in 1973 a newly-minted Clemson University graduate, had no idea when he began his first job at Riverbanks Zoo it would lead to a career that would span more than four decades.

Taking a look back at his cumulative progression, it is easy to figure how each step emanated from his first professional responsibility: supervisor of the Zoo’s animal hospital. Throughout these decades, he has been recognized by his peers, world-wide, bringing note to Riverbanks as a global leader in wildlife care, especially in the form of conservation, such as breeding programs. Under his leadership the zoo also is noted as an influential participant in more than 70 Association of Zoos and Aquariums (AZA) Species Survival Programs.

But in those early years following the zoo’s opening in April 1974, things, primarily finances, were shaky. Krantz stabilized it. Within his first year as Riverbanks’ executive director, in 1976, Krantz earned traction for his vision to institute the Riverbanks Zoo Society. Developing this constituent group to more than 3,000 in three years got the attention of decision-makers who read the growth as justification for support, helpful designations, and local pride.

Features of the original zoo design, such as the mountainous and moated exhibits for cats and bears, provided habitat for animals and aesthetics for visitors. Those features are still viable and very visible, even as new features have been added, in an orderly process. Perhaps the most striking addition to what in 2002 was described as the “new” zoo was the 22,000-square foot ecosystem birdhouse, which continues to be a highly visited and appreciated feature, now with three geographically-themed avian habitats.

By 1982 Krantz accepted the AZA’s prestigious Edward Bean Award for the zoo’s black howler monkey breeding program. The following year the signature education center came on line. Today, education continues as a hallmark, with programming for homeschoolers on line throughout the year.

The Riverbanks Farm, opening in 1988, was recognized by the South Carolina Chapter, American Institute of Architects, with an Award of Aesthetics. In 1989 the Aquarium and Reptile Complex (ARC) opened and received AZA’s Significant Achievement Award in Exhibit Design in 1990.

These consistent advances nudged Riverbanks out of the small zoo category into one of significant size and importance, drawing the recreational media’s attention, which in turn brought thousands more visitors to what already was South Carolina’s most visited gated attraction.

Krantz recognizes his good fortune to have been promoted, so early in his work life, to the directorship of an institution set (then) on approximately 100 acres (now 170 acres,) spanning both sides of the lower Saluda River, leased on property South Carolina Electric and Gas leased them for $1 a year – 99 years. “All along I’ve had a supportive governing authority (Note: in 1969 the South Carolina General Assembly established a Special Purpose District and seven-member commission to govern the zoo.)

Krantz also credited “an incredibly talented staff – that has grown from as few as 60 full-time personnel in 1974 to more than 130 full-time and 200 part-time or seasonal employees today, and a community that cares deeply for its zoo.” He said he’d also had the opportunity to work with many great professionals throughout the 44 years he’s invested in “this often wacky business.”

In all these years, Krantz can only recall a few times he had to be called in the middle of the night for some emergency. “Once, for instance, our vet thought one of our giraffes had been in labor too long and thought I should know. I got there right away and helped with the delivery. Mother and baby were fine.”

Zoo and animal experts with whom he has formed alliances hail from all over the world. “As part of this job, I have visited most of top zoos, many more than once.” Krantz generously shares knowledge of Riverbanks’ myriad successes with other professionals, and sometimes brings back useful ideas from his site visits. “One idea I brought back from visiting another zoo was our wildly popular Lights Before Christmas.”

Extending the visitation season from warmer months to year ‘round is one way Krantz’s leadership has made Riverbanks the top gated attraction in South Carolina, with a million visitors annually in recent years. “Every day as I arrive, I am amazed to see license plates representing every state in the union – and beyond. And this is early morning; since so many vehicles have out-of-state plates, we know they aren’t just passing through: we are a destination that has been part of their travel plans,” Krantz said.

Progressively adding improvements that reflect the public’s interests has kept Krantz at the top of his profession. In Summer 2015 the highly-anticipated Grizzly Ridge and Waterfall Junction opened, with Sea Lion Landing and Otter Run joining those new features during Spring 2016. To experience these additions, in poured exhilarated visitors - through a new front entry portal.

In such a vibrant living environment, technology would seem out of place, but Krantz said, “It allows us to make the best use of our resources, from animal and vet records to sharing breeding and animal health information within our alliances.”

He says it’s been a labor of love, but now that he has led Riverbanks to a sustainable pinnacle, Krantz is comfortable stepping down and seeking a new habitat – on the South Carolina coast.

How will he fill his time? “Gardening. I learned a lot from the gardeners here at Riverbanks.”