This 1940s home was expanded, upgraded and brought into the 21st Century without leaving the past behind. 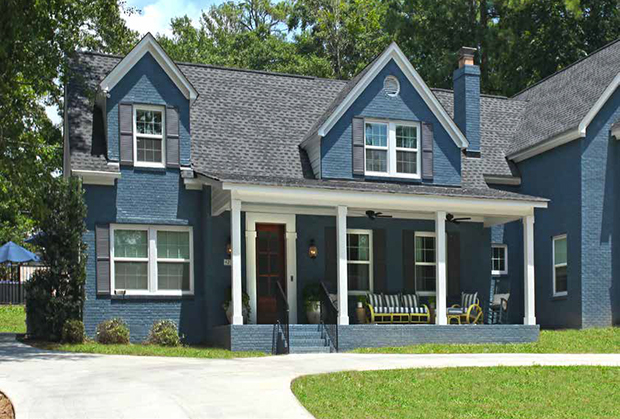 Ask son Toby what he likes about the massive renovation completed on his family home and he smiles. “Space to move around and get away from my younger sisters,” he says.  Mom Mary Catherine Brock explained, “With six of us living in a three bedroom, one-bath home there wasn’t any private space.  We added 2,000 feet to our home, including a two-story addition which had to tie into the old two-story structure. In the process, we added two more bedrooms, three more bathrooms, an upstairs living area and so much more.”

Indeed.  Previously owned by Mary Catherine’s aunt and uncle, and around the corner from her grandparents’ home in the Shandon area, Mary Catherine and Jonathan Brock bought the home and lived there for several years before deciding something had to be done.  Jonathan is a pediatrician with Sandhills Pediatrics. His wife taught school at Brennen Elementary School until their third child arrived seven years ago.  With Toby, 18, Ruby, 12, Scarlett, 7 and Penelope, 4, plus Indy the cat and Polly the dog, she has her hands full.

“We lived on Daniel Island in Charleston for four years while Jonathon was in medical school, but decided that Columbia was where we wanted to put down permanent roots,” she said. “My grandmother used to walk me down here to my aunt’s house to go swimming in their pool and when the house became available we made the move.”  All was well for a while, but as the children grew, it clearly wasn’t large enough.  They approached architect Tim Hance about their needs for the house, and in 2018 began to work on the plans.  After years of planning to renovate, they moved out of their house to the rental across the street and one week later COVID hit. “On June 6 of 2021, we moved back into our ‘new’ home.”

It was easy to keep an eye on the construction, and they returned often to enjoy the pool.  Jack Oliver Pools updated the pool area, removing the hot tub and creating a shallow entryway the children love.  “There was a wooden deck between the house and the pool and we removed that and installed pavers from Tranquil Escapes out of Camden,” Jack said. “Everything was updated except the shell. There were a few challenges, but basically it’s a brand new pool for the family and was a great project.” At the same time, Matt Murphy, project manager for S2K Group, tackled the building. There was lots going on.

“We had to tie a two-story addition to a two-story original house so there were challenges,” he said. “The original home had a basement but the addition was on a slab, which complicated things.”  As they began to work, it became clear that more renovations than originally planned were needed.  “We eventually took the whole house down to the studs, which added cost, but was great for the homeowners.”  In particular, Jonathon was very happy that all structural supports, electricity and plumbing were modernized, making the home safe and functional for a 2022 family.

“Jonathan and I grew up together in West Columbia,” said Matt.  “It was so amazing to come around full circle and help create their forever home.”  Once they got down to the studs, they discovered more that needed updating. “It was good we decided to complete the extra work,” he said.  “And, we were still able to keep that traditional Shandon style but go modern, even starting almost from scratch.”

The final home does all that and more.  On either side of the house are families who knew Mary Catherine’s aunt and uncle.  Curb appeal is strong, starting with the exterior paint color – Smoky Blue 7604 by Sherwin Williams. The front porch looks out over that familiar neighborhood, and the family sits out there frequently.  The front door opens to a compact foyer, with original (but updated) stairs leading to the second floor.  Many of the kid’s furnishings upstairs are pieces given by Mary Catherine’s aunt and uncle, with some antique, new and eclectic additions along the way. All of the painted furniture was done by Terry Watts from Three French Hens out of Re-Invintage in Five Points.

Their designer, Drayton Campbell-Weldon, owner of Vivere Interior Design, is based in Charleston, but also does work in Columbia. Drayton was a childhood friend of Mary Catherine and grew up in Shandon.  She is most known in Columbia for the interior design of the University of South Carolina Coaches Support facility, which received LEED certification. “Drayton understands Shandon Style and what we wanted,” the home owner shared. For example, the door hardware and lighting are reminiscent of what would have been in the home originally. It’s modern, but nostalgic.

“Mary Catherine was the perfect client, and this project only strengthened our friendship,” Drayton said. “It was fun being able to incorporate her love of color. There aren’t many clients who let you do an entire kitchen in mint green.” She considered the house for a moment.  “There is no reason you can’t have a home with beautiful quality pieces, while still being functional and kid friendly,” she said. “This house is proof of that.”

To the right of the foyer, the dining room features a table found on Chairish.com. The gorgeous chandelier is visible from the street. There’s a working fireplace surrounded by lavender blue tile. The space was originally used as the living room, but predated television days and wasn’t suitable for a family of six. Mary Catherine painted an old mirror frame a shade of coral, color matched to the dining chairs.  The chair upholstery is a testament to Drayton’s kid-friendly design.  Drayton sourced an eight-foot tall wallpaper panel from Schumacher and had it framed locally at House of Frames.  It pulls together the blues, greens and coral and anchors the room. 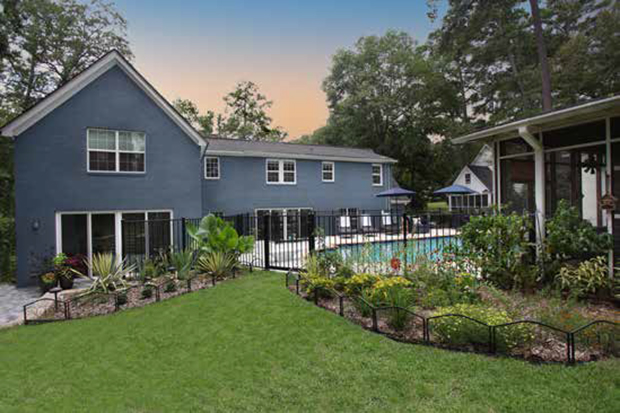 Doors on either side of the wall art reveal the thoroughly modern kitchen in terms of functionality, while keeping the charm of older cabinetry and the original wooden floors.  The paint is Benjamin Moore Nob Hill Sage.  (Elsewhere in the home the walls are painted Benjamin Moore Winter White.)  Two large refrigerators cover one wall, a supply issue compromise when the upright freezer they wanted was simply unavailable.  “Although it wasn’t exactly what we wanted, there’s plenty of freezer space,” Mary Catherine said.

A large island has four seats for friends or family. The bright blue color of the chairs is repeated several times throughout the home. One of Mary Catherine’s favorite accents is the backsplash from Palmetto Tile that makes the kitchen somewhat shimmer. Drayton says she is ‘obsessed’ with the ceramic donuts they had commissioned for the kitchen wall, created by Liv Antonecchia, from The Miller Gallery in Charleston. The lighting throughout was from Circa Lighting and complements the rooms perfectly.

The left corridor opens onto a walk-in pantry with barn door, the mud room, laundry, and home office for mom and dad. Polly’s food and bed are here as well, although Polly probably spends most of her time upstairs with the children.

To the right of the kitchen is a half-bath and a spacious family room.  Large floor to ceiling doors access the pool area and let in great light.  Furnished with children in mind, the high performance rug from Stark can take a beating and still look great.

A hall leads past a circular stairway, offering a second access and exit point for the children, for emergencies and for convenience sake. It looks like a piece of sculpture – a far cry from the spiral staircases of old. It’s right next to the primary bedroom, walk-in closet and bath.  “We still need to add a privacy fence because there are large windows in the bathroom, but it’s on back-order,” she said, adding, “I love the whole new layout but I really love our bedroom.”

Upstairs is the children’s domain.

Toby’s bedroom takes advantage of what was an alcove, originally for furniture, but now featuring his bed.  Vaulted ceilings on either side add visual appeal.  A bathroom is just outside his room. At the top of the stairs is an old phone-shaped inset, phoneless now, but waiting for inspiration.  Without a doubt, it used to house a black desk phone.

And then there’s Penelope’s room, in bright colors and housing a grand secret play space complete with artwork and notes placed there by former generations.  “I love Joe,” is one scrawled note.  Perhaps a brief childhood crush became something more.   “I love this,” confided Penelope, who advised me to close my eyes before entering to add to the surprise.

A large upstairs family room is a haven for the kids and their friends.  Scarlett’s bedroom is next, showcasing rainbows, including a light which she proudly illuminated.

The bathroom on this end is long and very functional and is used by Scarlett and her older sister, Ruby, whose room is on the back of the house.  “I really like my private space,” she said.  Clearly the expansion didn’t come one second too soon.  Twinkling lights strung around the top of her bed add a fairytale quality to her private kingdom.  Before the renovation, Ruby created her own space by hanging curtains across a room opening.

When asked why the pool wasn’t their favorite thing, Toby responded that they have had the pool but it is more space all of them love the most.

The family connections make the home so very special to Mary Catherine, but it’s the combination of new and old, Shandon traditional with modern function, and the professional and creative touches that make this forever home perfect for the whole family.