We Want to Love People. … And Feed Them 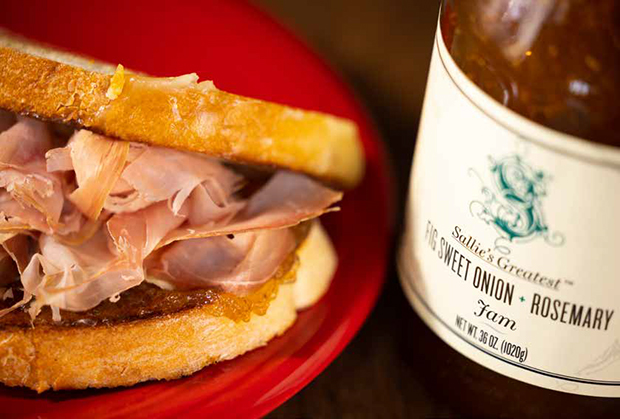 For years, Mai Turner has watched people criticize the food in the various restaurants where she worked, and she has been taking names. But not for the reason you might think. The names she has jotted down have been ingredients such as fresh avocado, goat cheese, and chopped pistachios or prosciutto, fontina, and fig jam.

“Mai used to say, ‘If I had a restaurant, I would do it this way,’” said friend and business partner Terri McLaughlin. “She had notebooks full of ideas that she had put together for years!” With that kind of passion, Terri knew she wanted to provide investor support for co-owners Mai and business partner David Stelzer as the three launched Sound Bites Eatery in downtown Columbia last year.

The three collaborate on nearly everything, and no job is too small. Commission a wall mural? No problem. Remodel a neglected greasy spoon? Got it. Make coffee? Sure thing. Bus a table? On it. Book artists and musical entertainment? Duh. Curate an approachable gourmet menu? Piece of cake. Everyone collaborates, sharing equal responsibility for each detail.

Mai and David became friends while working at the Gourmet Shop in Five Points. Both have done practically every restaurant job, and both have sound management experience as well.

“I came up with the recipes from all the places I have worked for or have loved,” Mai said. “I come up with the flavors, and David is really good at layering the ingredients to enhance the sensory experience of eating.”

“It’s all about the thick, salty tomato and the crisp bacon, the freshest bibb lettuce, and perfectly toasted brioche,” David said. “Yes, it’s a BLT, but it’s more than a BLT.” More than once, David has heard someone moan as they tasted it.

The partners also considered menu features that can be scarce in other establishments, especially customization. Mai felt that salads, in particular, have lacked creativity across the spectrum. She wanted people to be able to create their own salad from the freshest local ingredients. Customers at Sound Bites can hand-pick from a variety of fresh options, beginning with a selection of favored greens. And for those who love breakfast foods, the restaurant offers brunch all day on Saturdays.

People who enter the welcoming Sumter Street eatery are immediately drawn to the lushly colored mural on the left wall, painted by Columbia artist Beth DeHart. Then they gaze upon tables with cheerful racing stripes painted on them. And the games, just name it. Scattergories, chess, Battleship, tic-tac-toe, Scrabble, Mancala, and more. Oh, let’s not forget the books and magazines, all manner of interesting reads available at arm’s length from nearly every table.

Sound Bites also mounts a wall gallery featuring local visual artists that switches out monthly. They frequently schedule diverse talent from folk guitarist to violinist to (believe it or not) a metal band to provide the ambience only live music can. “Everyone who plays here tones it down, and it ends up being really cool,” Mai said. “The metal band actually did an acoustic show.” 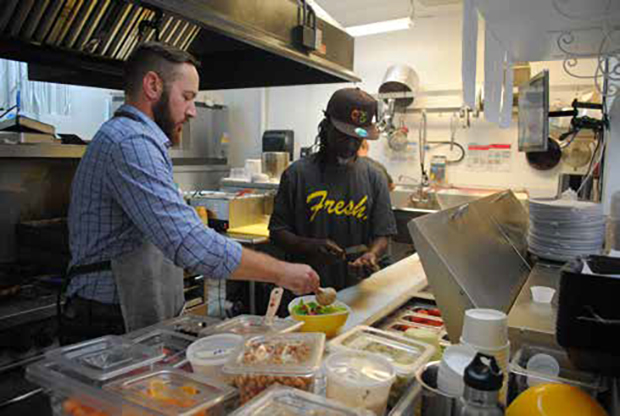 It's All About the Love

Less than a block away from Prisma Health Baptist Hospital, Sound Bites greets its share of anxious or sleep-deprived family members who wander in seeking a brief escape or a hearty meal. Terri likes to call many of such encounters “touchstones,” like the time a young man came in with his head in the clouds as his wife had just given birth to their first child. And then there was that hungry party of strangers from Europe.

“Last Thanksgiving, the restaurant was closed, but we were using it for our own family celebration. There were many people downtown walking around looking for a place to eat because there was nothing open,” Mai recalled. “This one French family, we just decided to let them in. … We had our Thanksgiving spread out, and they were so thankful.”

“We both get teary-eyed talking about it,” Terri added. “Mai gets excited about feeding lots of people. It makes her heart happy. We all share a similar life perspective. We want to love people. … and feed them.”

With the world gradually returning to normal, Sound Bites is quickly becoming a destination for returning First Thursday gallery strollers. It also has hosted events for the Jasper Project and others. It boasts a fine catering service with the capacity to serve up to 200 from a growing range of options such as “Soundwich” trays, salad trays, and box lunches.

“We really just want to bring our community together as much as possible with good, consistent, fresh food, art, and entertainment,” Mai said. “There has to be love in it. And with the food, I don’t want anyone to be unhappy with what they get. It has to be perfect, or it’s not good enough.”