Artist Tommy Thompson keeps evolving, never leaving the past completely behind, but embracing new techniques as his body of work continues to grow. 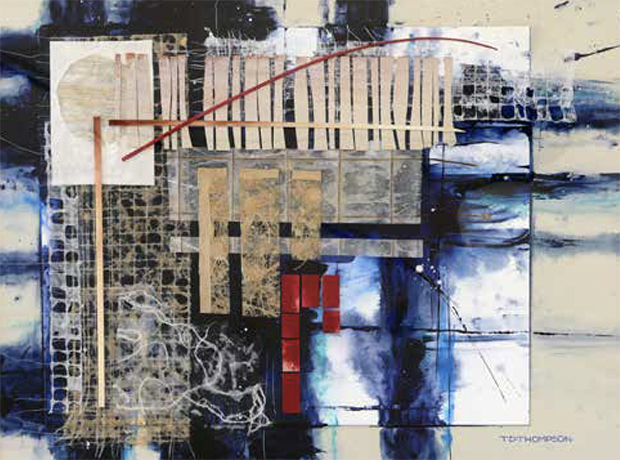 Sometimes, it’s a found object that makes its way into his work.  Or, he finds the perfect corner for the placement of an old military pin, or cogs from a clock.  Color chips have been incorporated, and even chopsticks, bound together with copper wire.

When I first met Tommy in 2007, he was just beginning to include textural elements in his paintings.  It was the first time I’d heard of Structural Abstracts but the meaning behind the words is clear.  “I utilize that phrase to describe what I do with my art,” he said.

Fast-forward 15 years. The Structural Abstracts are going strong, although his studio also contains several watercolor barns, memories of the Kentucky landscape where he was raised. The big canvases, though, are works in progress in preparation for the 2022 South Carolina State Fair.  “I am fascinated by clouds and these two include cirrostratus formations,” Tommy shared.  “I’m featuring diurnal tides for the ocean beyond the sand.  One painting has a path leading to the water, while the other has a path, but is approaching the shore.”  His third piece in this series will include cumulonimbus clouds, but that’s down the road.  “I’m going to take my cloud series a lot farther,” he said, adding that Edisto Beach will feature prominently in those next pieces.  He uses acrylics for his large pieces. It’s a medium he enjoys and his studio is filled with beautiful work, leaning toward abstract, but often with a discernable subjects

“I like to break down my work into elements, spending one day working only on sky, while another day it will be the trees, or perhaps those cloud formations,” Tommy said.  “I like the segmented approach to painting.”

An endodontist by profession, Tommy spent three years in the army during the Vietnam years, and then 27 more years in the Army reserves. Painting became a creative, time-off pursuit. Now fully retired, he enjoys creating a series of paintings and spends hours every day in his studio, supervised by Tyra Banks, the terrier-mix rescue who follows him everywhere. And although the current works in progress are contemporary landscapes (millennials really love large landscapes, he says), the structural abstracts are everywhere. “I began these big pieces with a turtle theme,” he said. “Our family has spent lots of time at Edisto Beach and everyone loves the hatchlings when they emerge and race toward the ocean.”  He’s also done butterflies and goldfish, and hanging at PFA Gallery in Chapin is a large white abstract with bright red ladybugs marching across the canvas.  Very striking.

When describing his work he talks about building up textures, cutting out elements (with a surgical scalpel for precision) and always using archival watercolor paper or boards to last.  There are found objects, too, and he creates his own webbing and often paper as well, to achieve exactly the look he wants.  Those finished pieces he calls assemblages and they are generally smaller, reminiscent of shadow boxes with their three-dimensional framing.  “I consider texture to be almost as important as color,” Tommy said, adding, “and they work well together for the finished piece.”  In one assemblage, there’s a British military medal, emblems, and color chips, placed on top of pages from an old engineering manual. Watch gears, and even old photos find their way into his work.  The various parts become a cohesive whole, reminiscent of the past, but thoroughly modern in execution. He’s even used dried grass fronds

A wander around his studio finds lots of white emboldened with bright colors. “I went through a red period, but that’s mostly over now,” he said.

If you’re lucky enough to be on the mailing list, you’ll receive a Christmas card from Tommy and Sharon, his wife (a master gardener and former columnist for the State newspaper).  The subject will always be a watercolor barn created from somewhere in Tommy’s past and his memory. “I have friends who collect them, and during the worst of the pandemic I created several, so I am set for the next few years,” he said, laughing.

He’s been teaching a watercolor class for years, and enjoys sharing his knowledge with eager would-be artists.  “I find it’s an excellent medium for artistic newcomers and my five-week classes give them a lot of experience.” He plans to teach another class at Crooked Creek Park, in Chapin, in the fall, just in time for his students to complete a watercolor to give as a gift during the holidays.

When Tommy wants a break, he enjoys fishing, especially with his grandson, or even simply walking around his yard at the edge of Lake Murray.  “My wife has created her own living canvas and there’s always something beautiful outside,” he said.

Recently, though, he’s been hard at work so fishing has taken a back seat.  “I’ve long been fond of participating in the State Fair and I think it showcases a lot of talent from our area,” Tommy said.  Indeed he and Sharon made the decision long ago to collect art only from South Carolina residents and they’re still seeking out talent and supporting it.

So who inspired him? He’s self-taught, but thoughtfully considered the question and pointed out an old artist’s palette on the wall that he purchased in the North Carolina Mountains. Its well-worn patina has splashes of color and he added “Simplify Simplify Simplify” to its surface.

“I saw several Andrew Wyeth paintings there, and the owner of the antique shop told me that this palette had belonged to the artist,” Tommy said. “I had to have it because his work has been an inspiration to me.”

Find Tommy Thompson’s paintings and assemblages at PFA Gallery in Chapin, through his website (TDThompsonart.com), and if all goes well, at the upcoming State Fair, October 12-23, in Columbia.