Michaela Pilar Brown has always used art to help us understand one another. It’s more important now than ever. 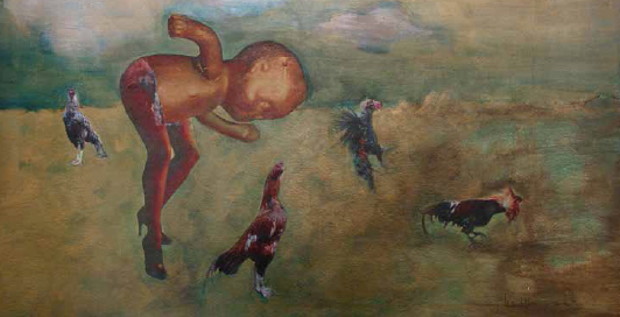 In her earliest memories, art was present. “My mother exposed us to the fine arts, visual, music and dance. She was also employed in a museum; my grandmother was a quilter and my grandfather was a farmer who made things,” Michaela Pilar Brown said. “My mother kept a well-appointed home and dressed with flair. She sang, played the piano and was a fantastic dancer.” She and her five brothers were military brats and her father was deployed all over the world, but when she was four, he retired and she was raised in Denver, Colorado. She is an image and object maker, a citizen of the world and a keeper of conscience.

Brown studied sculpture and art history at Howard University and during her years there she met one of her many mentors. “My family always mentored me, but there were so many others as well, including Richard Hunt, who, when I was bold enough to ask if I could work with him, allowed me to work and paid me for my labor. It felt like confirmation that I could have a career making art. He called me any time he was placing public sculpture in Washington, D.C. where I lived for many years, and I assisted him. The time spent with him was invaluable in learning how to frame a career.

“I have been impacted by so many others, including Martin Puryear, Carrie Mae Weems, Bettye Saar, Lorna Simpson, Leonardo Drew and Cindy Sherman.”

Brown’s work is a revelation and her mediums include installation (perhaps her most satisfying), photography, collage, performance, and film. Her blog spot and a recent blog post describing the contents of her late mother’s pocketbook demonstrate that writing is a creative outlet as well. Her time as a 2017 Artist in Residence in New Zealand gave her the time to be alone and create without distractions other than place and context.

“My work is cradled in social justice,” Brown shared. Family history plays a prominent role as well. Why does installation speak to her so strongly? “It’s theatrical, with elements of play,” she said, adding that there’s a spontaneity involved in the process. Collage is another favorite. She is represented by Wim Roefs’ if ART Gallery, located on Lincoln Street in Columbia. He calls her work disruptive, yet elegant. She is focused on speaking to the humanity of black people, and includes fantasy, history and the future. “I hope those who view my work see the spirit of the fight for social justice,” she said. 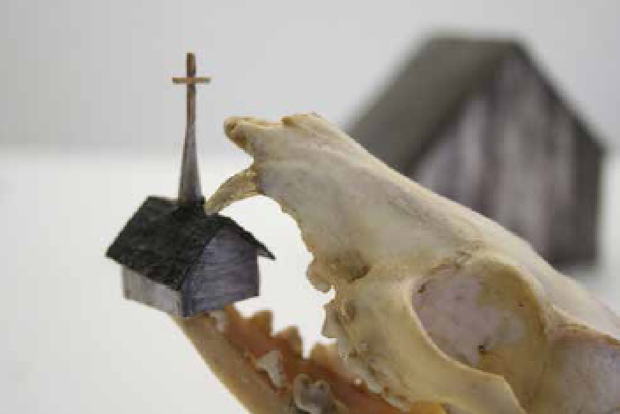 Brown’s biography talks about “exploring the body through prisms of age, gender, race, sexuality and history.” She says that within these vignettes, she considers memory, myth, ritual, desire and the spaces the body occupies. Her narratives move between past, present and the surreal. She calls her work confrontational and seductive.

Elements of her own history are often present. For example, in “Family Troubles,” an archival digital print on aluminum, the central figure is inverted and holding a model of the home built by her grandfather in the early twenties. And yet, those types of realistic elements are often joined by monsters, angels, heroes and giants. “I like to illustrate our reactions to occupation and absence, desire, responsibility and obligations,” she says on her website. She incorporates rich colors and often dark images and she’s fond of the color blue.

And the present world has taken notice. The multidisciplinary artist has partnered with performer, director, choreographer Terrance Henderson and the Tapp’s Outpost to launch a collaborative project, scheduled for the fall. “To Own the Suffering – Creative Authorship and Institutional Critique” will include a public symposium to discuss current systems of cultural access, the development and performance of publicly edited documents, and a bibliography and public exhibition of collaborating artists.

Recent exhibitions include being one of six American artists selected to participate as a Resident Artist for OPEN IMMERSION: A Virtual Reality Creative Doc Lab (produced by the CFC Media Lab, The National Film Board of Canada and Just Films). She was an inaugural Residential Artist at the 2016 Sedona Summer Colony, and 2016 Artist in Residence in Kaiserslautern, Germany.

Earlier, she was the 2011 Harvey B. Gantt Artist in Residence at the McColl Center for Art + Innovation in Charlotte. Her work is on display in museums and in public and private collections. Brown lectures on her work, her process, contemporary art, and community arts programming through workshops, facilitating and strategic planning. She has just accepted a position as Interim Executive Director of 701 Center for Contemporary Art, will have a solo exhibition at if ART Gallery beginning September 19 - October 10, 2020, with a meet and greet (scheduled and socially distanced) September 26, 11am - 5pm, and a durational performance "I Love You More" a memorial to Marilyn Ware Hayes Brown (her mother) October 3, 2020 1pm - 3pm (scheduled and socially distanced).