The Art and Science of Henna

The art form is mixed and varied, with artists from Hindi, Jewish, Romani, Christian, and Muslim areas, plus many who no longer exist adding to the mix 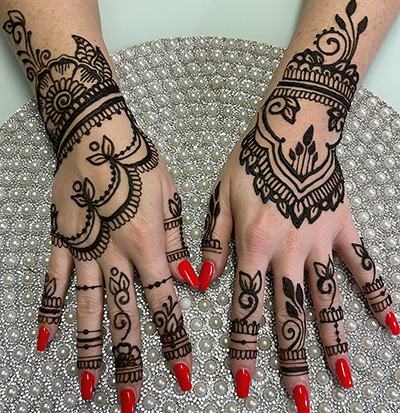 Think of it as painting on a person. Henna is derived from the plant Lawsonia inermis and, in its purest form, turns a rich mahogany color on skin, hair, and nails. It is not a tattoo because it doesn’t break the skin and isn’t permanent, but if you’re careful, you can enjoy its lush presence on your body for about two weeks.

For Gina Wolfe, it’s been dancing around her consciousness since she was a small child. “I used to draw on my hand all the time,” she said. “My mother would ask me why I wasn’t using the paper she gave me, but I was more fascinated by creating art on my body.”

Gina grew up in Chapin.

She continued her interest in art, but it wasn’t until she began to take her son to festivals, and he fell in love with the henna artists who would decorate his hands or feet and sometimes his back that she began to discover everything she could about the art.

“My son had ADHD, and he found the touch on his skin to be very soothing,” Gina explained. “He really loved having designs drawn on his back, sitting still and relaxing into the moment. Eventually, an artist friend suggested that I should learn to do this myself so that I could apply henna at home.”

In retrospect, she realized it was (and is) a form of touch therapy that leaves an imprint to enjoy for a brief time. “I began to attend conferences and research all I could about its history, purposes, and designs,” she said.

Everything she learned simply enticed her to study more. She was an avid student, with mentors in Toronto and Washington, D.C. Her son’s friends would ask for designs, and then their parents, and soon she had a business which she called ZIBÂ, a Persian word which means the beautiful inner light of the soul or radiance of life, according to Gina. A quick search reveals that Zibâ is found in the bible as the name of a servant in the book of Samuel. It also has other meanings and is used as a girl’s name, but here, just think beauty, and you’ll get the inspiration.

Spend time with Gina, and you’ll also catch her enthusiasm for the art. She teaches classes on the history of henna, henna mixology, and design, and she is as passionate about what it is not as what it is. “Learning the history is fun, such as the fact that it’s historically a woman’s art, a form of connection to other women when we share the act of giving and receiving henna,” she shares. “It’s been happening since before written history, which I find amazing.”

Don’t even think of asking her to apply a black dye on your skin. “I use 100% natural organic henna,” she said. “The black ink isn’t the same thing. If it stains black, it is a chemical compound that’s toxic and very harmful to the skin and body. It’s actually illegal in the United States but can still be found on some shelves.” 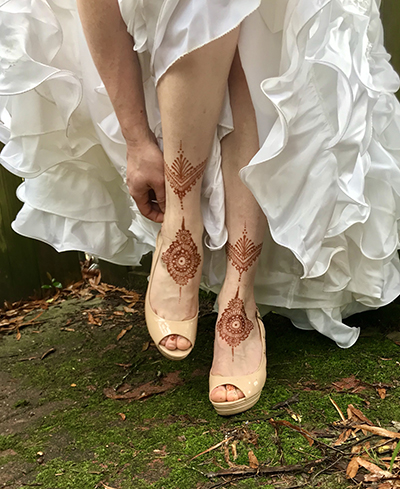 There is a dark blue color from the jagua plant that is natural and acceptable. Gina suggests asking henna artists if they mix the paste themselves. She uses only five ingredients in her henna paste: organic henna powder, hand-squeezed lemon juice, pure cane sugar, therapeutic grade essential oils, and water.

The oils chosen depend on the purpose of the design. Essential oils may include cardamom, Frankincense, jasmine, or lavender, among others. The mood is tranquil or celebratory, or often a bit of both.

The ZIBÂ website offers ideas for when and how to indulge, and Gina is emphatic that anyone can wear a henna design. Brides and their attendants often enjoy a get-together with celebratory henna designs traditionally used for wedding adornment. Soon-to-be new mothers can have beautiful belly art (often using lavender as the essential oil) to help prepare for the new arrival. Individuals choose designs for special occasions, including simply wanting to do something fun, beautiful, and meaningful for themselves or to surprise a loved one. Her studio can be a sacred space and a joyful one.

And although men have used henna for thousands of years to decorate their bodies or dye their beards, today’s male customer often comes in and requests a design to help them decide if they really want to have a permanent tattoo.

From a scientific perspective, medical research is discovering more possibilities for henna, researching applications for cancer, diabetes, intestinal problems, and bacterial infections, among others.

For Gina, the process is artful and mindful and incredibly satisfying as she draws swirls, paisley, symbols, and flowers. Her personal favorite designs come from the Khaleeji (Persian-Gulf) tradition.

“I like the incorporation of negative space, in which the spaces between the designs become part of the design.”

In fact, she is enthusiastic about every aspect and element that helps to create the finished product. It’s a labor of love that brings joy to all who experience it.

Designs can be as diverse as the people who wear them but generally can be classified into eight major divisions: Moroccan/African, Indian, Arabic, Indo-Arabic, Pakistani, Western Contemporary, Khaleeji (Persian-Gulf), and Indo-Western Fusion. The most ancient origins are found in Africa. Scientists believe it originated in Africa and then spread from there into modern-day Bulgaria, across to Malaysia, and down into Australia. The art form is mixed and varied, with artists from Hindi, Jewish, Romani, Christian, and Muslim areas, plus many who no longer exist adding to the mix. “It is truly a multi-cultural art,” she says.