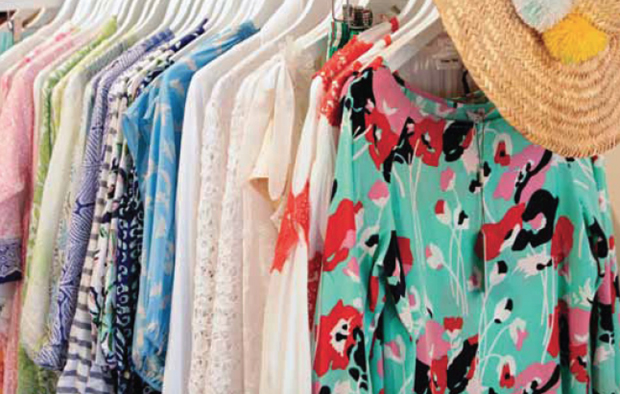 Heather Campbell is drawn to neutrals, textures and organic materials. Evidence of her penchant is in the design and inventory of her new store, The Blake. The floor pattern – inspired by interior designer David Nightingale Hicks, is of a white hexagon geometric stamp on a cream background. White, taupe, cream, and her favorite hue, cafe au lait, are a palette to the carefully selected, up-to-the-minute fashions straight from New York City and other style hubs around the globe.

Campbell’s recent re-entry into the fashion world came after somewhat of a 10-year-sabbatical, during which time she concentrated on mothering her three children. She majored in political science and economics, but says she always had a love for fashion. Her parents were instrumental in supporting her initial entry as a boutique owner of a shop called Willis & Winter Womenswear on Devine that she owned from 1994 until 2004 when she sold it. The store featured “break out lines out of New York,” she says. In fact, Willis & Winter was one of the first stores in the area to carry such lines as the now familiar Kate Spade.

Pretty and petite, Campbell never completely left her love of fashion during her sabbatical. In fact, her new store’s name, The Blake, comes from the designer line that bears her signature label: Eden Blake. Named for a seaside hotel in France that she has visited, and whose style and design she admires, The Blake became an inspiration for a ready-to-wear line that garnered awards, the attention of the press, and the interest of some retailers.

She says that Eden Blake is “on snooze” for the moment while she concentrates on six days a week and frequent day trips to New York City to see new lines and meet with current designers. “Once a shop girl, always a shop girl,” she quips, pointing out how much she enjoys selecting just the right pieces to create one-of-a-kind, head-to-toe ensembles for her women customers – many of whom were loyal followers for years at Willis & Winter and are thrilled to see Campbell back in business.

Campbell takes the job of inventory selection seriously. She has an acute fashion sense, but she also listens to customers and looks ahead at what they might want and need. For example, she says that with climate change, warm weather months in Columbia extend into September and October. Whereas heavy sweaters and darker colors may have appealed to customers by the beginning of September years ago, women desire to sport lighter, layered looks and fresher colors well into the fall. She says the Columbia market is more closely mirroring a Florida market.

And, when many stores are already putting winter wares on sale in January and February to clear out for spring looks, she plans to provide customers with as many cozy, soft, and stylish fashions as possible. “That’s when it’s cold and that’s when customers need to have new seasonal things to wear,” she points out.

Her recipe for success centers on offering a range of prices on top quality goods from individual designers and smaller companies. “It’s important for me to know them … to know what’s behind the goods.”

One of her designers might be from Brooklyn, while others are from remote corners of the globe. Currently, her two main lines are Rebecca Taylor and Halston. She said they provide everything from blue jeans and soft t-shirts to cotton and silk blouses as well as dresses. Campbell is all about offering customers those pieces that can be worn casually during the day, for a business meeting, and into the evening. And she looks first to American-made goods.

However, she is also carrying items such as baskets and pocketbooks crafted by women in Vietnam and Indonesia for the Buji Baja Global initiative that puts poverty-stricken women to work so they can feed, clothe, house, and educate their children.

She is always on the lookout for a few select jewelry pieces, choice shoes, and even resort wear. New pieces arrive, sometimes daily. A few times, the store has experienced what she calls a “feeding frenzy” when just a handful of a sought-after item arrives.

Yet, she does not want The Blake to be about labels or about trends. She defines herself as a “classic, traditional” person – but with an eye and interest in that special touch that is modern or novel. Sometimes she will only order a few of something because she wants whoever purchases it to feel that it is special to her. She used to have what she admits was a “magazine addiction” when it came to looking for ideas and inspiration; she now relies heavily on Instagram. “It’s a great resource.”

Even though she is a neutral girl, Campbell shows off touches of color in the store’s interior design – by featuring works by local third-generation abstract artist Erin McPherson – and by showcasing carefully edited hues in fabrics and textures.

“It’s all about layering pretty pieces,” says Campbell. “And when I help a customer, I love finding what they need, even if I don’t have it in the store. I will get on the Internet to help them with an ensemble. I ask them what they have in their closet. I just love creating that whole look.”