Support makes a huge difference when you’re in the fight of your life. It helps to know others have gone before. 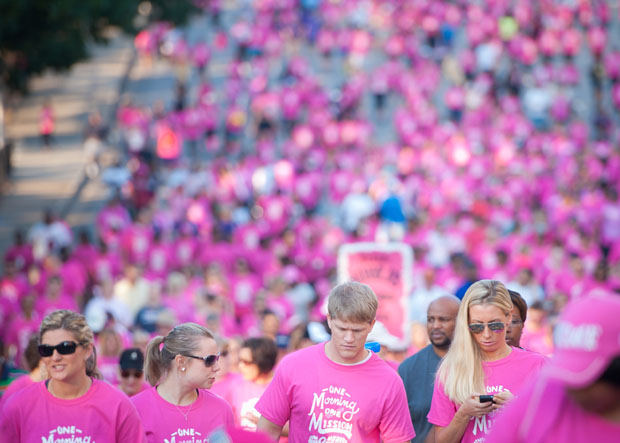 Jennifer Jackson was not going to be one of those pink-ribbon fanatics. She wasn’t going to be tethered to a support group. Breast cancer, chemo, radiation – and then she’d be done with it all.

“My life was not going to be about cancer,” she said.

But something happened to Jennifer as she carved her path through the shock of developing Stage 2 breast cancer at age 33, the difficult choices, the tough surgery, the grueling treatments. Something happened that would bring her to one of the major breast cancer awareness events in the region on Oct. 18 — and into a sea of pink ribbons. She joined a fitness class for cancer patients and suddenly, the whole support group thing made sense.

“I’m telling you, the difference it made in my life, to be able to talk with someone who’s gone through it … it makes me stronger every day,” Jennifer said. “Now I realize how important it is to be around others and talk about it.”

During Breast Cancer Awareness Month in October, people don special T-shirts, participate in walks and runs, raise money for research and remember loved ones who are gone. It’s also a good time to learn about important information and new developments in prevention, diagnosis and treatment. But in essence, these events are about support.

“Jennifer is an example of someone who originally, when she was diagnosed, was kind of closed off to anyone other than family helping her,” said Ashley Dusenbury, an assistant vice president with the Palmetto Health Foundation, which sponsor’s Columbia’s Walk for Life/Run for Life on Oct. 18.

“The support group experience opened up a whole new world for her.”

A new baby — and cancer

Jennifer, who lives in Irmo, is now 35. Her demeanor is spunky, but her experience has been harrowing. In April 2011, her second son, Luke, was born with a rare chromosomal abnormality; he died a month later. She and her husband, Travis, were still reeling from that loss when she found that she was pregnant again.

Everything went fine with daughter Logan’s birth in the spring of 2012. But as she was breast-feeding the baby, she found a lump in her left breast. Concerned about the possibility of a mastitis infection, she saw her OB-GYN, who ordered a mammogram as a precaution.

The lump was malignant. Jennifer, her husband and her doctor all cried together as she learned she had cancer that had already spread to a lymph node under her arm.

As her husband did double duty with the vending company they ran together, Jennifer embarked on treatment that included a double mastectomy, 16 rounds of chemotherapy and more than 30 rounds of radiation treatments. A proactive but private person, she mostly stayed at home. She reluctantly accepted help from friends, church members and close family members, especially in caring for her preschooler, Ty, and his baby sister.

“I don’t know how I would have survived without them. My mom and my sister pretty much helped me raise my children for a year,” Jennifer said. “I feel sad that I missed so much of Logan’s first year, but sometimes two weeks would go by when I couldn’t even sit up.”

She now is cancer-free, but still faces reconstruction surgery.

According to the American Cancer Society, about 1 in 8 women, or 12 percent, will develop invasive breast cancer at some point in their lives. About 40,000 women will die from the disease in the United States this year.

Maintaining a healthy lifestyle can help reduce the risks, as outlined on Breastcancer.org:

Greater awareness, earlier detection and improved treatment have contributed to a decline in breast cancer death rates since 1989, the ACS says, and there now are more than 2.8 million breast cancer survivors in the U.S.

The ACS recommends annual mammograms for most women starting at age 40.

“As breast cancer incidence peaks for women in their late 50s and early 60s, this period is critical to successful screening and early detection,” Baker said.

For those concerned about exposure to radiation from the mammogram X-rays, Baker said the technology has advanced considerably from methods used in the 1970s. Now, she said, the exposure is about what a woman would experience from the atmospheric radiation while taking an airplane trip from New York to Los Angeles. Also, she said, improved technology such as CT tomography has lowered the numbers of anxiety-inducing “false positives.”

In South Carolina, Sen. Joel Lourie, D-Richland County, has introduced a bill requiring health care providers to advise women that if they are younger and/or have denser breast tissue, an ultrasound might offer better detection than a mammogram. The bill passed the Senate and will be taken up by a House committee next year.

Baker said “legislated screening” is controversial. She said that while experienced ultrasound technicians can detect an additional three cancers per 1,000 women screened, there are three times the number of false positives. There is concern that effectiveness of ultrasound for screening could fall (and false positives increase) if the practice becomes more widely used.

Meanwhile, Baker said, an important advancement in treatment is broader availability of improved genetic testing. This helps to identify patients’ specific risks for breast cancer so they and their doctors can make the best possible decisions about treatment.

There’s been a bit of a backlash over the whole pink ribbon approach to positive thinking when it comes to breast cancer. A highly regarded writer even based a book on her annoyance with it (Barbara Ehrenreich, Bright-sided: How the relentless promotion of positive thinking has undermined America).

And yet, this autumn, many of those 2.8 million survivors will take part in the pink ribbon camp-outs, walks, runs, luncheons, dinners and fashion shows, and will draw strength from one another. No one understands what they’ve experienced like another woman who has gone through it.

Planners for Palmetto Health’s walk/race are excited about this year’s tie-in with the South Carolina State Fair. Those who want to follow the walk with a stroll on the midway can get in free that day if they show up in their pink shirts. Palmetto Health, Lexington Medical Center and Providence Hospitals also will be participating in efforts to welcome fairgoers with information about screening and services.

The walk itself, now in its 24th year, is expected to hit the $8 million mark in contributions. Jennifer Jackson will be there with family and friends.

It’s one more experience of the support that she decided she needed after all. “It definitely changed everything about breast cancer for me.

South Carolina State Fair, Oct. 8-19: “We’re Going Pink.” The fair is partnering with local hospitals to promote awareness and early detection of breast cancer. There will be more than 100,000 free packets of pink forget-me-not seeds plus a pink and white tent full of helpful resources and other activities. On Oct. 18, people wearing pink event shirts from the Walk/Race for Life events will be admitted free. Information: www.scstatefair.org (do a search for “Seeds of Hope”).

Women’s Night Out, Oct. 14. Lexington Medical Center’s evening of awareness and education features doctors’ advice on risks and screening, a dinner and silent auction, and guest speaker Kate Larsen. Larsen, a personal trainer and mother of three, describes how friends helped her regain hope and joy after her difficult experience with breast cancer and chemo. Location: Columbia Metropolitan Convention Center. Information: 936.8850 or lexmed.com.