This homeowner’s secret to happiness is getting everything she wanted in a home, including location, architectural features and help from a good designer. 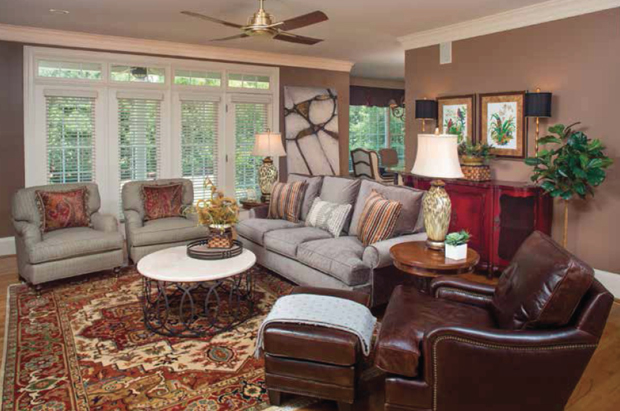 This homeowner’s secret to happiness is getting everything she wanted in a home, including location, architectural features and help from a good designer.

The nonstop smile and enthusiasm of Susan Shealy when she’s showing off her new home makes it easy to see how this house is exactly where she wants to be forever.  She’s the proud owner of this traditional Southern charmer in Blythewood, South Carolina that’s been made over in rich tones from its original palette.

Looking for a new place after the passing of her husband, she set her mind to finding something really special with all the features she desired. The wide front porch with stately columns, a master bedroom suite on the main level and room for grandchildren to visit were all important, but the location was key. A golfer for years, Susan often plays at the Columbia Country Club. Being close to the club was a driving force in choosing this executive home in the Club Colony neighborhood.

“I played golf and wanted to get closer to the club. So, I’d looked a little bit and found this house on Zillow and loved the look on the outside, the big porch attracted me to the house,” Susan explained. “I was glancing at the paper and saw an open house. I went and didn’t know if I was ready for something like this or not.  I’d call my agent, asking to just go look at it one more time. She always said, ‘sure,’ but I was trying to talk myself out of it.”

The pull of this versatile layout in a neighborhood near the golf course was too strong, though. “I just loved it. It’s a big house, but I’m by myself. I came back one more time with my daughter and granddaughter and they loved it, too. So, I made an offer and they accepted it!”

As a retiree, she chooses to live the rest of her life in the home of her dreams. Downsizing wasn’t her plan, but making this home feasible for aging in place was a goal she achieved in grand style. Susan purchased this gem in October of last year and there were things she wanted to do to make it her own. “First, I got a painter and hired him and then hired Amy, my designer, to get started. She helped me with the paint colors and then started picking out fabrics and then we chose the furniture,” she said.

“I met Amy in October when the house was completely empty,” Susan continued.  Amy’s company, Amy Spencer Interiors, specializes in interior design and color consultation. The partnership between Susan and Amy is truly a relationship where a genuine understanding exists between designer and client.

Amy assisted Susan in creating a new environment for the downstairs of the home. “She’d send me things on Pinterest and I’d add comments so she’d get a feeling of what I liked. That’s how it started,” Susan said about the genesis of their collaboration. “Our first trip together was the fabric store. We would’ve gone to furniture stores, too, but it would’ve taken forever without Pinterest,” she said.

Susan didn’t want to bring a lot of her old furniture to her new home, giving Amy a clean slate to work with in the key living areas on the main floor.  Together, they found a number of pieces from Strobler to fit her modern classic motif. “I don’t have the eye for it, but I know what I don’t like. Amy’s just amazing; she can pick out anything. You can tell her what colors you favor and she somehow knows just what you’ll like,” Susan commented.

The kitchen was already in great shape from the previous owners, so the wall colors, furnishings and window treatments were the biggest items of concern. The glass fronts on the upper cabinets give Susan a perfect place to show off her new china collection. The stainless steel microwave and the oven sit over one another, looking like a double oven. She’s considering adding a warming drawer to help with her entertaining goals.

The table in the kitchen belonged to Susan’s mother, yet she’d never been able to use it as a kitchen or dining room table until now. “The table was light, as Mother had it refinished from being really dark when I was a kid. It was a honey color for years and my husband and I used it in the room over the garage. It was too big for our dining room, but it fits perfectly in here,” she said. It’s now got a hint of grey in the chocolate coloring and compliments the wall tones.

The scalloped chandelier was already in place, so the designer incorporated it into the finished look. “Amy ordered the upholstered chairs and the drapes on the big picture window,” Susan said. “It’s a fun color pattern with the kick-out pleats on the chairs matching the window treatments.”

Artwork in the kitchen brings a splash of green tones with floral notes in a large format. “When Amy and I ordered these prints, we thought they were eleven by sixteen in size, and all four were going to go on the wall at the end of the kitchen table. When they arrived, [we realized] they’re actually much larger, so we put two of them in the kitchen and the other two in the hallway just beyond it. When you’re at the kitchen table, you can still see all four images. My two favorites are in the kitchen,” she said.

“The bedroom, I think, is breathtaking. I have this wonderful rug on top of the Berber carpet and the wall color is fantastic,” Susan enthused. When the painter began, the color was quite dark. Called High Tea from Sherwin Williams, this creamy brown warms the room and makes the bright white trim and high ceiling pop. Her favorite birds are represented in several design elements, including the coverlet, the drapes and framed prints.

“When we went shopping for fabric, she wanted to know what colors I preferred. But, when I saw the birds, I said I loved that print so much! It’s exactly what I wanted,” she said.

Her custom-made bed has a grey fabric covered base to accommodate the adjustable frame so she can prop up in bed to watch television.

“I found all my great contacts from my real estate agent, who provided my plumber, handyman, my painter and my designer. If you ever need anybody, a real estate agent knows everybody! That’s the best resource,” Susan said.

Spacious and open perfectly describes the master bath. Textured floor tiles and similarly patterned neutral wallpaper give a rich backdrop for relaxation. A double vanity has a central place to sit down and get ready for the day. The two huge walk-in closets offer ample storage and organization for her wardrobe. “In this room, it’s all about me,” she said.

The jetted tub has been host to her grandson, who had a lot of fun with bubbles during a visit to his grandmother’s new house.

A central fireplace anchors the far left wall with built-in bookcases and cabinetry. The lamps in the den are great finds from Amy, as are the programmable candles. “The candles are on at six every evening, and it just makes this room homey and cozy,” Susan said.

A new flat-screen television is mounted above the fireplace. “I watch television in here and decorators don’t really love technology items that are large! I have a 60-inch TV and it covers up the opening for the old-style set, so I’m happy with it,” she said.

A special memento adorns the left wall. “This map was given to my husband from Owens Corning in Aiken, where he was the plant manager. Amy had it reframed and it really is beautiful. It was s a smaller picture and she added matting and it goes well right there,” Susan explained. Other artwork in the den includes a familiar theme of vibrant bird life. “The two bird prints are works from Cherie Nute, a local artist who happens to be Amy’s stepmother. Amy brought several of her works over and these are the ones I kept. When I look at those, they catch my eye,” she added.

The large abstract art piece adjacent to the kitchen is a new addition. “She just brought this piece over recently and I said I really loved it. I thought it was interesting, as well as being pretty, different and odd.”

A real showstopper, the dining room is immensely impressive. Amy sourced the furnishings from a number of places, including auctions. The walnut dining room table, which is round with an expandable leaf, is one of the auction finds. “It’s perfect because when the club is closed, I have my friends over for card games at this table,” Susan said.

There’s such a mixture of new and old together. She was uncertain about the pieces needed to create this look, only knowing she wanted something beautiful. “I had this mirror, it was that brassy gold and Amy really didn’t want to use it. My artistic friend, Sarah, said it could be painted. So, we put out a box and paper and put the mirror on the table and Sarah started painting it with her fingers. She kind of rubbed it with paint, instead of brushing it. She didn’t start out with gloves, but I gave her a pair to use to finish it and Amy loved the result. She left a little bit of the gold that goes with my other furniture,” Susan explained.

Interlocking chain candleholders flank her traditional china cabinet. The same programmable candles are found here as well as in the den. The wallpaper surrounds you with silvery branches, shimmering on a neutral background. The window treatments are handmade and match the fabric of the dining room chairs. “This chandelier was already here and we worked around it,” Susan said. I just couldn’t get into changing everything in the house. You have a budget and I was going to spend enough, so we made it work.”

More improvements are on Susan’s agenda for the future. “Amy didn’t do the foyer, so I’m going to have her come back and do that and the half bath,” she said. “And, I’m thinking now about putting in a pool as well. A small, kidney-shaped pool that’s a nice size would be great.” It looks like this home will continue to evolve, giving her the kind of home she’s always wanted while meeting her needs for both today and the future.