Honor Flights have allowed hundreds of veterans to visit their special monuments in our nation’s capital.  Thank you, Bill Dukes. 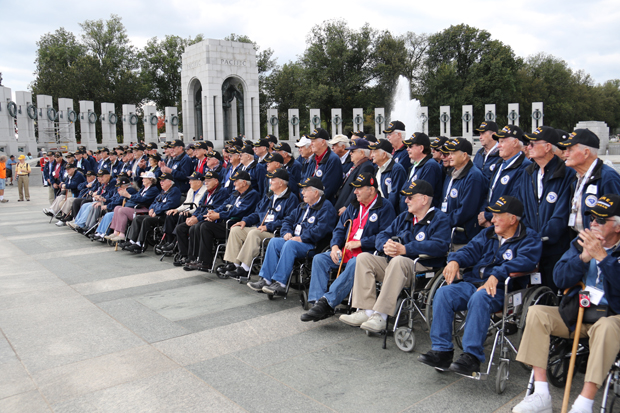 On November 8, 2008, Honor Flight No. 1 took off from Columbia Airport, headed for a memorable day in Washington DC with some very special passengers. Now, eight years later, Honor Flight No. 21 marks the conclusion of this remarkable odyssey, celebrated throughout South Carolina as a tribute to military veterans of the “greatest generation.” And a Columbia man, Bill Dukes, stands at the center of what he calls the greatest experience of his lifetime.

The Honor Flights, offering a cost-free one-day trip to the nation’s capital for veterans of WWII and the Korean War to visit their special monuments, have been widely documented and telecast over the years. Generous donations from a grateful community made it possible, and careful planning down to the smallest detail made it unforgettably successful for all concerned. When Bill Dukes gets hold of an idea, he pursues it to completion. This one struck a responsive chord throughout the state.

“Like so many big things, this one started out small,” he recalls. “My brother Don and I thought about taking our dad to Washington to see the WWII monument. Dad served in the Pacific in the 1940s, and had told us a lot of stories about his service there. He was 91, and we wanted him to see the memorial.

“I am a private pilot, and we were thinking of just flying up there as a family. I happened to visit a friend in Asheville, NC, who told me about what was then called Honor Air, which chartered airliners to take veterans to DC. The first one started in Cincinnati, Ohio. I learned about Honor Air in 2007, and right away it seemed like the very best way to do what we had in mind.”

It took some doing. Volunteers and sponsors had to be recruited. Somebody who knew how to charter an airliner, somebody who had contacts in DC for reception and touring and lunch, volunteers who would accompany the aging veterans, and support from through the community. Bill Dukes started inviting his friends to lunch at his Columbia restaurant The Blue Marlin: political leaders, military brass, charitable organizers, educators, University students, service clubs. Plenty of bases to touch, and the enthusiasm he received was overwhelming. The newly-named Honor Flight South Carolina program was taking off.

The 21 flights took about 100 individuals each time, at a per-flight cost of $60,000. They prepared for any expected emergencies, but amazingly, the entire series went off without a hitch or a mishap. It would be hard to say who got the most out of this program: the veterans on their special day, the volunteers who accompanied and helped them, or the sponsors who financed it all. Bill Dukes is convinced he is the greatest recipient of this joy.

“I joined the Air Force after college,” he says. “I wanted to be a pilot, but I was too tall. As fate would have it, my military assignment turned out to be Food Service, and I was on my way to what would be my lifetime business career.”

He found himself in Thailand, managing the Officers Club, and after his four year military stint was over, he signed on with the Steak and Ale restaurant chain. Later, he and some partners started the Longhorn Steak House franchise in Charlotte, and when the desire to return home to Columbia took root, he opened The Blue Marlin in the Vista.

That has been a rewarding venture for Dukes, and now he has turned the management of Blue Marlin over to his son Ryan. At 71, he has taken on a new challenge, which like everything else he tackles looks to be a winner.  He carries the title of Civilian Aide for South Carolina to the Secretary of the Army. His gift for relationships will come in handy. Again.

“The Army stresses the importance of good community relations wherever it is located,” he says. “It wants to be a good citizen for the people living around it, and we maintain constant communication between the military and local political leaders. Cutbacks happen from time to time in the military. We want to be supportive and to have the structure available to combine our strengths.”

He promotes inter-community relations with Fort Jackson, mentioning specifically the graduation ceremonies which occur every 10 weeks as new recruits are ushered into service. At many of these occasions, new citizenship is celebrated when some of the recruits achieve their dreams of becoming Americans. Fort Jackson welcomes local residents to this moment, offering tours of the on-site museum and lunch to visiting groups.

As for the very latest update on the Bill Dukes saga, he is reveling in the birth of a grandson. “I’m getting into the grandparent business a little late, but loving every minute of it,” he says.