As Darion McCloud tells the story, lives can be changed 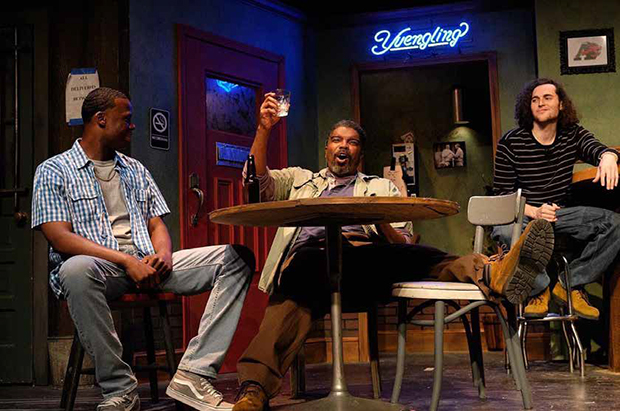 When local storyteller and actor Darion McCloud was young, he used advertising flyers to draw characters for stories he created to entertain himself. It wasn’t until he became a grown man that those early flights of fancy worked to make him the celebrated regional arts leader he is today.

These days, McCloud, a congenial giant of a man with a graying beard but the build of the college football player he once was, now has a story of his own he wants to tell. With the facial animation and voice timbre of the Shakespearian actor he now is, McCloud enthusiastically describes how he wants to use a building in North Columbia for storytelling and performing arts.

He's excited to report how he and the One Columbia arts organization are going to use a North Columbia location to reach out to audiences young and old alike. One Columbia has designated the structure at 1013 Duke Avenue as a shared cultural space for McCloud and partners. He himself is using his magical storytelling talent and theatrical skills to reach not only youth but also their families. Frequently, an older sibling might bring a youngster for a storytelling event and stay for the experience. “An entertaining story can capture attention and stir the spirt in ways that conventional presentations never can,” McCloud says.

As he speaks, he enlivens the room with the electricity that helped make him a 2022 recipient of a Governor’s Award in the Humanities. The award is given to recognize outstanding achievement and contributions to the arts in South Carolina. Bestowed by the S.C. Arts Commission, it is the highest honor the state gives in the arts.

Bonita Peeples of the S.C. Arts Commission says, “Just by being the extraordinary human that he is, Darion has a gift of weaving lives together that would not normally intersect. His artistic brilliance elevates all who bear witness to it, no matter in what scope. S.C. truly has an artistic treasure in Darion McCloud, and although he could easily work anywhere else in the world, he makes our city and state a bit brighter by choosing to stay in Columbia.”

One Columbia Interim Executive Director Margie J. Reese shares her enthusiasm for the partnership unfolding at the North Columbia location. “When you meet Darion, you know immediately that he has an energy that cannot be bottled. Columbia has yet to fully acknowledge the power of this gifted man as a cultural ambassador and as a Griot, telling the stories that document and celebrate our shared history. Our organization continues to benefit from Darion’s commitment to this city, and we are so proud to be associated with him,” she says. Griot is a designation, originating in West Africa, for a revered storyteller who keeps legends alive.

The Duke Avenue location is ideal for many reasons, McCloud says, because of nearby homes and schools with potential audiences who can be inspired by the power of entertainment art. The location will be known as the 1013 CO-OP and will be home to several art and cultural initiatives, including McCloud’s own inspiration, The Magic Purple Circle, his storytelling platform. McCloud says he himself is an example of a teenager who was steered in the right direction by someone special. A mentor stepped in and made sure he stayed on the right path. In college, McCloud won a walk-on position with the Gamecocks, but chose not to pursue the opportunity. With his mentor’s encouragement, he persevered in earning a degree in studio arts, only to learn there weren’t many jobs for people with his skills at that time.

He then accepted an offer with Richland Library in the children’s literature department. With the right place and audience for storytelling, his lifetime calling was launched. One storytime session was pivotal for McCloud. A parent with ties to local theater groups heard his delivery and connected him with Trustus Theater.

Other opportunities and growing recognition followed. It wasn’t long before McCloud was asked to share his talent widely elsewhere, telling stories at funerals, in prisons, at birthday parties and the Governor’s Mansion. Young and old were mesmerized. His Governor’s Award in the Humanities cited his presentations in settings as varied as classrooms, corporate settings, libraries, campfires and, of course, theatres.

In 1998, he founded the NiA Theatre Company with a goal of offering more roles for Black actors. One of the first performances the troupe did was in 1998 for the Somali Bantu immigrants who had come to Columbia.

NiA has been invited to appear across the Southeast including presentations at Charleston’s Piccolo Spoleto and Charlotte’s Harvey B. Gantt Center of African American Art and Culture.

McCloud has numerous statewide partnerships to his credit in higher education, the humanities and the arts. He has performed at Benedict College, Francis Marion University, the University of South Carolina, and in multiple school districts. Besides Richland Library, he has worked with the Charleston Public and South Carolina State libraries, Historic Columbia, and Columbia Children’s Theatre.

He has also worked with the Mint Museum in Charlotte, the Columbia Museum of Art, Kershaw County Fine Arts Center and South Carolina Philharmonic. He is a member of the S.C. Storytelling Network, formed more than 20 years ago to promote the art of storytelling statewide.

With an impressive repertoire of leading stage roles and widespread storytelling festival appearances, McCloud has an endless array of tales to tell and characters to portray. Like all artists, McCloud bemoaned the isolation and closures caused by the COVID-19. Opening doors now at the new 1013 CO-OP in North Columbia, is especially gratifying for McCloud, who is also celebrating full recovery from a stroke he had during the pandemic. With a lifelong commitment to art, McCloud is now celebrating a season of renewal with fresh opportunities.

As for the impact he has on individuals and the community, Heather McCue, children’s librarian at Richland Library, shares a story herself. She and Darion were sharing a sidewalk meal when they were approached by a parent who told of the lifelong influence McCloud had on her son in encouraging him to read. McCue explains, “I’ve witnessed this scenario more times than I can count because that's what Darion does. He cares deeply. He loves us fiercely and Columbia is all the better for it.”