At this beautiful residence in downtown Newberry, prepare to be transported back in time to an era of well-mannered Southern sophistication. 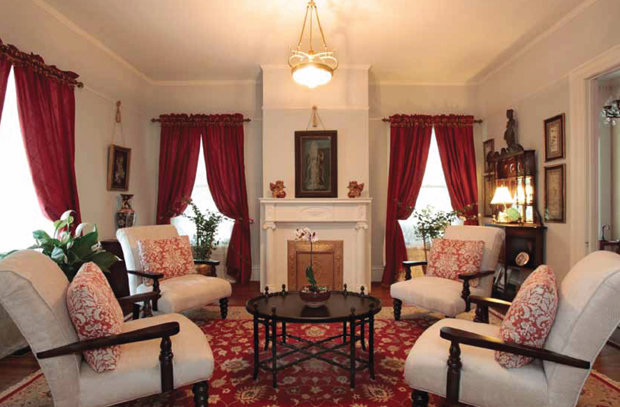 When Tamra and her husband, Lindon, purchased their property, there were things to be corrected structurally, so work was done mainly on the outside of the residence. They bought the home in June 2015 and wanted to move in shortly thereafter, but damage was discovered from floods and heavy rains. They’ve lived there since last Thanksgiving and continue to work on it.

Every owner has done something structural to the house. “At one time, the city manager told me he thought they’d have to condemn it and tear it down because it was in such disrepair,” Tamra said. But, the owners along the way have brought it back to life. “We got a wonderful home and we’ve done some renovations to it to suit our taste and to have our friends enjoy it with us,” she continued.

The back section of the home was a screened porch that is now enclosed and includes the laundry area. “The built–in cabinets were part of the original screened porch. It’s remained through the years and has been a delightful piece to discuss. The previous owners were proud of it still being there,” she said.

The kitchen is quite modern. The couple brought this room to the current century by mixing in modern convenience and style with classic elements, like the tin backsplash and trim work. The old chimney for a wood stove was framed in tin and painted black. The color scheme is an unusual blend of black with brown and red that comes together for a warm, fashionable look with a nod to the past. They also added the shutters, which are a natural fit. As you move through the house, you discover the kinship Tamra feels with the French Renaissance and the furniture in the kitchen mixes the modern with the old.

“We left the chimney flue and got an original flue cover that’s framed with a Roman scene,” she commented. The Colonial style wall crank telephone came from her dad’s side and was the family’s first phone (the first phone in the neighborhood). It’s been reclaimed for this kitchen.

The rest of the house (except for two floor areas) has the original Heart Pine flooring. There’s a little stairway to the outside that servants would’ve used to make their way upstairs. The doors are all thick, solid wood and the builder loved the beauty of the wood in its natural state. But, over the passage of time, the wood was painted by different owners, even though the builder had a clause in his will that no one was to ever do so.

Moving on through the back portion of the main floor, turning right out of the kitchen leads you to a short hall and a full bath, complete with claw foot tub, crystal chandelier and floral wallpaper. There’s an oversized wooden wardrobe, used for linen storage. Fresh lilies give a hint of soft fragrance to envelope you in the dainty surroundings.

Beyond the bath, you enter the casual den where the family watches television and relaxes with their two sweet dogs. She’s a fan of Jim Harrison, remembered in this issue, and several pieces of his artwork hang in this room. Her personal connection to the artist is notable. “I’m from Orangeburg originally and I knew him,” she said. “He’s from Denmark and I met him many times.”

This room has another important piece of art: the pie safe. “My mother actually rescued that piece from my grandfather’s barn. She did the copper work designs herself with a nail and hammer, so it’s very special.”

All of the fireplaces in the home have the casted screens. Two fireplaces have been converted to gas, but the rest are original. The fireplace screen in the dining room is wonderfully preserved.

In the main body of the home is a stairwell that’s quintessential Cam Davis, with pickets topped with natural varnished wood. It’s a focal point when you enter from the main doorway. “Fortunately, this wood did not get painted and remains in its original form,” she commented.

One of their favorite rooms in the home is the formal dining room. “We’re not finished in this space, but we’ve got the parquet French walnut table with the French thrones as a centerpiece. There is really beautiful woodwork on the queens,” Tamra said. All of these pieces are from the 1880s French Renaissance. “The tall cabinets here are called Wedding Cabinets, which were given to couples at the occasion of their marriage to hold their belongings. You’d find these cabinets in the Netherlands. We were lucky to find some beautiful ones. I was shopping online and looking for these and found them right in downtown Newberry,” she continued.

“I furnished the room around this piece,” Tamra says of the sideboard that sits under the stained glass windows. “We bought it from the previous owners and I understand it has been in the house since the original owner. Lore has it that Mr. Summer wanted to be buried in it!”

Adjacent to the dining room is the ladies parlor which has been transformed into a music rooom. All of the artwork in this room is musically themed. She has the Renoir Lady at the Piano print overlooking the baby grand piano. “It plays beautifully,” Tamra said of the piano. “In fact, one of our friends is chair of the music education division at Newberry College and he and his wife have come over at Christmas and given us concerts.”

In the foyer hangs an impressive lantern chandelier that originally hung in a hotel in the Netherlands. The previous owners added this fixture to the home. “I did the colors in this room around the colors in the chandelier,” she said.

The foyer contains an art piece from her husband’s travels. Near the front door, Dutch cabinets from 1910 flank the entryway with beautiful woodwork and stained glass insets.

The windows at the front contain traditional wavy glass and are the Tootle’s contribution to the house. The original sidelights were replaced at some point the past, so the couple wanted to put back windows that would be appropriate to the home’s heritage. The original transom would have been more like a spider web in its design. The transom and sidelights were conceived by Tamra and brought to life by Eddie Donald with Foothills Art Glass in Greer, South Carolina.

“When I found that Eddie had worked on restoration of stained glass at the Biltmore House, it seemed as if it was meant to be for him to be the first craftsman during our relationship with this magnificent home to add that something special back to it,” Tamra explained. “At night, if you look at it from the outside, it’s just beautiful.”

The huge pocket doors separate the man’s parlor from the entry. In the South, this room was known as the Confederate Room. The décor here is more masculine and many pieces are from Lindon’s personal collection. He has been to countries throughout the world during his career in aviation and these souvenirs make the room very personal. Tamra likes to sit here and plan her day.

The billiard room is still a work in progress. The art is prominent here. A dominant painting from Bruce Nells-Smith, a local artist from Newberry whose work is now found from the Southeast upwards to New York, looks down upon the room from her perch on high. There’s a massive animal skin to the right, and a metal table to the left, with a snake motif designed by Tom Risser, (an artist who designed the vending machines for Coca Cola). You know you’re in a sporting place, as mounted hunting trophies hang in this room as well. The corner bookcases aren’t original to the house, but a previous owner created these shelves as a built-in. “This room is to come in, play pool and have some fun,” Tamra explained.

Moving up the main staircase, you encounter four pieces of stained glass on the far wall. One of Tamra and Lindon’s favorite features is the stained glass and, with more than twenty-five pieces of it throughout the house, there’s a lot to love. One of the previous owners in the 1970s, named Culbertson, was a stained glass artist.  “A few pieces were added during her relationship with the house.  All are stunning,” she said. The floral work is exceptional and different, as the stamens on the flowers are actually outside of the glass. Each glass portrays a hummingbird and the colors rain down on you from the sunshine and glass in a pleasant glow.

At the top of the stairs on the second floor, you encounter one of the main living areas. This den is a place Tamra finds herself often.

The master bedroom is connected to a his-and-hers bath; the one in the front is used as a guest bath. Carol Pittman, a South Carolina artist favored by the Tootles, does tile mosaics. She breaks apart a clay tile, paints it and then reassembles it. It becomes a very heavy piece of art. This bathroom features one of her pieces. It reigns over a large claw foot tub, a separate shower and other artistic flourishes, all brightened by a crystal chandelier.

Guest bedrooms on this floor are filled with antiques and period touches that remind you of the nicest B&B you could ever visit.

The secluded backyard has a beautiful gazebo with blue stone patio and an ivy covered arbor entryway. Tamra and her husband are open to hosting parties and even weddings on the grounds of this historic property. They both understand the weight of responsibility that comes with owning this home. It has such a long and public history and the town watches how it matures.

Finally, one of the most obvious features of this graceful home is the traditional, wide porch that extends beyond the front to enfold the house proper. “The expansive porches are simply divine.  Front and left side porticos extend over wrap-around main story porches,” Tamra explained. “The porticos are pedimented, with lunettes and supported by immense, paired, ionic columns.  The inner porch has a flat roof supported by more than a dozen Ionic colonettes.  The entablature encircling the house features a boxed cornice and plain frieze.  There’s more than twenty four hundred square feet of porches to relax, entertain and let your imagination take hold of you to times past.”

History of the Home

Located in the heart of downtown Newberry, this home was first brought to life in 1895. The original owner was John Harrison “Hack” Summer.  Hack remarried after losing his first wife. The new bride, Jane Ragland, lived in this home and it took on her name. It was originally referenced as the Ragland House in historical records early on, but later references go back to the original owner’s name. “Most all Newberrians fondly refer to it as the Summer House,” its current owner, Tamra Tootle, explained.

“I think one of the best features of the home is its history (a C.C. “Cam” Davis home), as a massive, neoclassical residence designed by a 16-year-old, Earnest Summers,” she said. Summers later became an architect. “This home was built by craftsman who worked on the Biltmore House in Asheville, North Carolina in the spring and summer and the Newberry house during the winter.”

The home was under construction for nearly 10 years. It has continued to evolve throughout its life and even had the master bathroom function as another kitchen during World War II.