To Market, To Market! 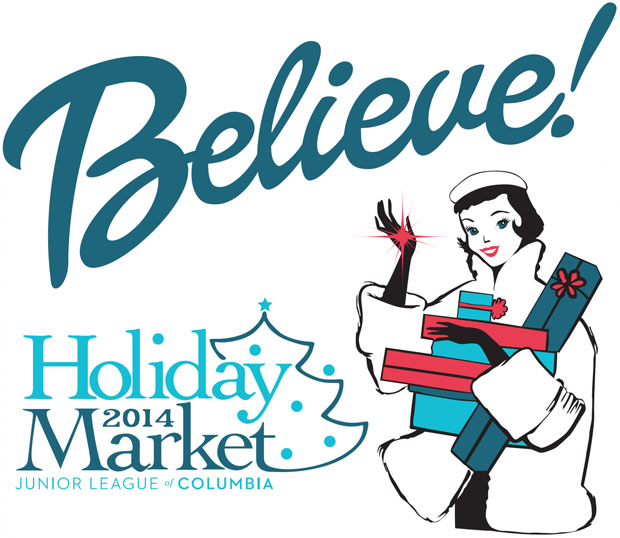 A singular imperative charms all of Columbia to Believe! starting early in December. (One definition of Believe! does not fit all.)

Shoppers who look forward to Junior League of Columbia’s annual Holiday Market believe that, once again, specialty vendors, some who have been showcasing their wares at the popular fundraiser for nearly three decades, will return to make the season merry and gift-giving bright.

Those with shopping bags to fill believe the expansive market days and hours will allow them to partake, even if they have rigorous schedules. Shoppers also believe there is fun to be had, especially during special events, a Preview Party and Silent Auction, Ladies Night Out and PJs with Santa.

For Midlands children, little ones who inspire the perpetuation and preservation of the holiday spirit, “Believe” is the word that best describes their innocent anticipation of the season’s traditions. Believing will make it so!

For members of Junior League of Columbia (JLC), the word has multiple interpretations. First, its 1,500 -plus members believe they will outdo themselves in December 2014 by hosting an event that delights shopping guests and ignites the spirit of the season while surpassing last year’s results. They believe that results of their year-long planning will bring Columbians together, vendors and buyers together, as well as wishes and happenings together.

Months before the doors to the Cantey Building at the State Fair Grounds open at 6:30 pm. December 3, for the opening volley, the Preview and Silent Auction, this hard-working League fully believed in their causes and their caring in the community.
The event’s co-chairs Natalie Salley and Jessica Shand speak together for the membership: “We Believe in the power of leadership, communities, voluntarism, and – most strongly of all – in the potential of women.”

In the case of the JLC’s civic work, results are impressive. Salley explained: “Over the past 29 years, the Holiday Market, JLC's largest annual fundraiser, has generated more than $2 million for our community. Proceeds from Holiday Market support all our community programs, events and volunteer efforts.” In addition to jump-starting the city’s gift shopping effort, the event raises awareness of the local community initiatives JLC supports.

And JLC knows a great tag line when they hear one.

The Believe! theme for this year’s Holiday Market recalls the iconic Macy’s Thanksgiving Day Parade, festive storefront windows, and the Miracle of 34th Street. Salley and Shand concur that the numerous committees bringing this year’s Holiday Market to Columbians have created a spectacular experience, infused with memories of such classic holiday traditions. Shand explained: “In researching the history of the Macy's past holiday campaigns, we discovered the first Macy's Thanksgiving Day parade took place in 1924, the same year the Junior League of Columbia was established. A fun coincidence! Especially since we are now celebrating our 90th anniversary – and that local celebration will continue into 2015.”

General admission tickets are $8 per person and include entry to all four days of the market, during regular hours.  Children 12 and under are admitted free.  Special events requiring separate tickets include: the Preview Party (with silent auction), Ladies Night Out, and PJs with Santa. During the market, parking will be $2 per car.  Baggage check and concessions are offered at an additional charge.  Additionally, an ATM will be available on-site.