Tourist in Her Life

Margie Bach loves to work with her hands. We love what her hands and heart create 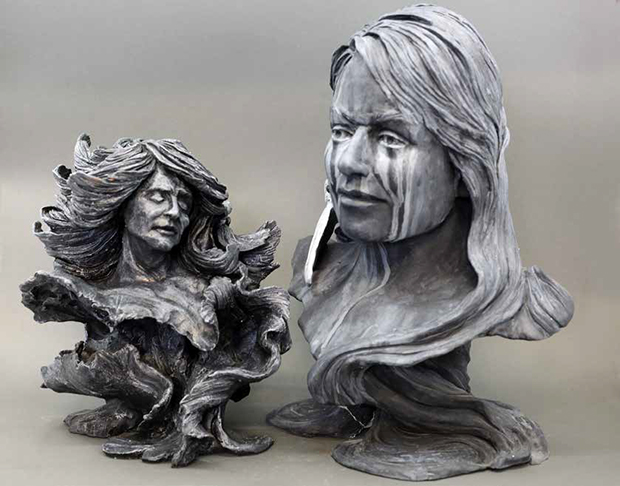 You can’t fully appreciate the second portrait bust until you see the first one and discover both stories.  In her mid-forties, Margie Bach was happily married and raising children in Savannah when she decided to attend art school.  “I initially enrolled in Armstrong Atlantic State University with the intention to pursue painting and illustration, but after taking an intro to ceramics course, I fell instantly in love with the medium and switched my major,” she said.  And even though during her final year in college, she had to have both hips replaced due to osteoarthritis and had to relearn how to walk, when she received her Bachelor in Fine Arts with an emphasis on Ceramic Sculpture, life looked bright.

Several months later, her husband was diagnosed with pancreatic cancer.  “I spent the next six months taking care of him until he passed in March of 2015,” she said, adding that she had to postpone graduate school, sell her home and move to Columbia where she was close to her daughter and grandchild.

“I didn’t create any work for almost two years while I was trying to rebuild my life and heal from grief,” Margie said. “I didn’t feel as though I could reinvent myself and create the life I wanted while living in the shadows of the past.  I set a deadline of three years to pull myself together.”  She finally created a small studio and got back to creating and teaching.  She decided to supplement her education and study with individual artists she admired. There was no shortage of mentors to inspire and teach.

John Jenson and Mac McCusker, her ceramics professors at Armstrong, helped instill a love of ceramics and influenced her direction.  Sculptors Judy Mooney (now deceased) and Glo Coalson, taught ceramics classes in Wild Acres Retreat in North Carolina.  “I developed a great rapport with those women, and now I am teaching some with Glo,” she said.  “They both helped inspire me during the dark times, and I am close professionally and personally with Glo.”

As she began to try to emerge from what she calls “dark grief” she felt compelled to sculpt her pain.  First she created a portrait bust with wild swirls around her head and a hole where her heart should have been.  There is a look of anguish, as if gazing upward in search of answers.  “It looks as if I am in a tornado, and emotionally, I was,” Margie shared.

A bit later, she tried again.  This portrait bust has just a hint of a smile.  Streaks of color look like tears and to the side, a white moth is beside her head. * A hint of a smile shows the beginning of the return of joy.  ”I saw white moths everywhere, before I had any knowledge that they are very symbolic creatures to many cultures,” she said. “I took their sudden and then ongoing presence in my life to represent freedom to become who I could be and I also discovered that the creature is considered by some to be the soul of a departed loved one.”*

*There are different suggestions about the symbolism of the white moth, however many believe the meaning conveys being brave enough to become the person you were meant to become, perhaps by discarding or flying away from what has been holding you back.

Although Margie has long found inspiration in nature, a transformative experience occurred during art school, when she did a study abroad program called Art in Argentina.  The group spent three weeks travelling through Northern Argentina, spending time with local indigenous tribes in order to help them build economic opportunities through their art.  “I was 47 and it was my first international experience,” she said.  “My professor asked me to describe my biggest takeaway.  I replied that because it was all so new, I felt the sensory experiences of sights, sounds and tastes in a way I did not back at home.  I took that sense of mindfulness back and since then, I have tried to be a tourist in my regular life, to pay attention to the smallest of things.”

Her examples include the play of light in her garden, beautiful trees in nature, transitory spaces like water, a kayak trip down the Saluda, the books on mythology that she devours, cicadas, who sing as a community for the love of the individual, and a recent sailboat trip from Maryland down to Charleston. 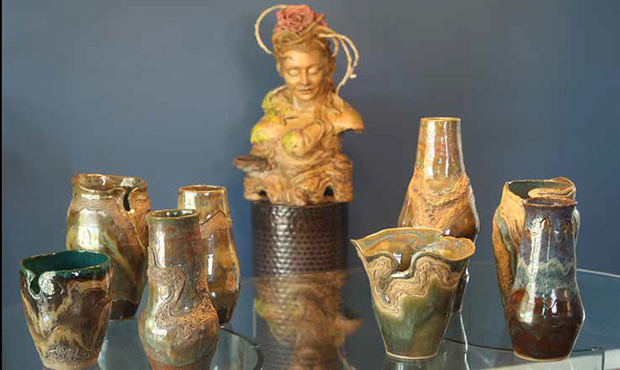 She loves working with layered glazes and all of her pottery is functional as well as beautiful.  She admires and utilizes wabi-sabi, the Japanese aesthetic which according to Wikipedia is a world view centered on the acceptance of transience and imperfection.

Margie has recently been diagnosed with gouty arthritis (discovered after a fall during kayaking), and had surgery to repair a torn meniscus.  She is undergoing physical therapy to regain her ability to walk and although her yoga teaching is on hold while she heals, her yoga practice continues.  “Yoga saved my life,” she said with a smile.  She has found love again with Ken, an engineer and fellow yoga teacher who built a studio for her.  It was Ken and her cat, Sweetpea, who accompanied her on that recent sailboat adventure. “I have matured as an artist and I am excited to continue to develop my personal style and gain more recognition in the arts community.”