The Browns moved from the Holy City to Columbia, built their dream house and found their forever home 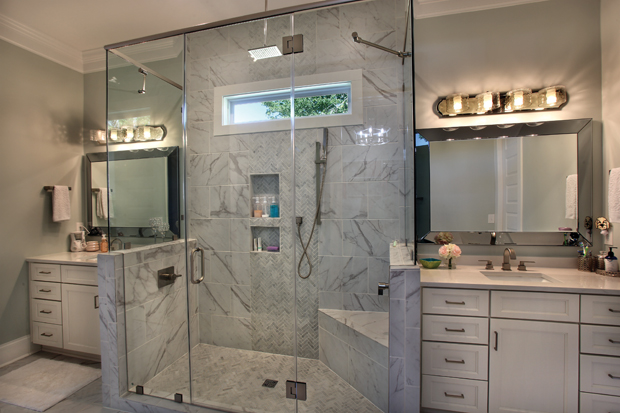 It’s a study in contrasts. Nicole tends toward traditional architecture and furnishings while her husband, Wayne, prefers a clean, minimalist look. Somehow, they’ve made it meld perfectly, with the help of skilled professionals, and many compromises. Walk into the house in Regatta Shores and you appreciate and applaud the results.

First, they had to get here from Charleston. Seventeen years ago, the time was right to make a move. They liked what they found in the Columbia area and the couple started Automotive Experts of Columbia, car specialists who have developed quite a following through the years. Eventually, it was time to build a home and they wanted the water. What they got was a big water view from a quiet cove near the dam.

But what to build and who to build it? “We looked at so many plans and liked parts of many.  Eventually, we had to turn to a builder who could put it all together for us,” Nicole said.  Magnolia Builders fit our criteria.”

It was a great choice. “The Browns came to us with a good idea of what they wanted … a traditional two-story home on a crawl space,” Magnolia owner Scott Walter said. “After listening to their needs and meeting with them on site, I suggested removing the second floor and doing a basement instead. This change allowed them to save money and maximize their lake views.” Magnolia’s team of professionals was then able to help them design and make selections to put together a beautiful and practical home that met their needs.

Included within the challenge was finding elements that matched both of their aesthetics, but it was much easier in the overall design than the furnishings. Those took a bit of negotiating, but in the end, everyone is happy. “We give KB Kitchen and Bath a lot of credit,” Nicole said. “Their team worked with us to create the perfect pantry, kitchen, bathrooms and our master closets.”

Walk into the home, attractively built with Cottonwood Savannah brick from Meridian. Cool and inviting, it’s easy on the eyes, a preview of what’s to come. First you have to get past Tucker and Molly, the family Goldendoodles who check you out in a very friendly once-over.

Inside, the entrance hall has three similar art pieces on the right hand wall. They cover a large space without being overbearing. Overhead, the first light fixture is beautiful, a black wrought iron structure around very traditional crystals. He wasn’t sure he liked it; she loved it. Now, everyone comments on them when they see the design, (which is repeated in similar but different lights and chandeliers throughout the home). I’d have climbed a ladder and taken the master bedroom fixture home in a skinny minute.

To the left is the dining room, without a doubt the most traditional room in the house. Coffered ceilings, white wainscoting and another spectacular chandelier accent the light wood dining table and water-themed artwork. Just perfect and a traditionalist’s dream. Tucked away to the side of the dining room and behind the kitchen is the laundry room. Modern and roomy, there’s a place to hang garments as soon as they dry. “I don’t like to pile everything into a basket and go somewhere else to sort and fold,” Nicole said.

To the right is daughter Hailey’s room and en suite – the mirror has multiple lights for make-up application and an ample closet stores her clothes and treasures.

Straight ahead is the living area, large, but cozy. Ceilings are tall – maybe fifteen feet. A very modern gas fireplace adds warmth and beauty at the touch of a switch, and the Beech hardwood floors add lightness and texture. The floors were Nicole’s choice and there’s nothing traditional about them. Most of the furniture came from Pottery Barn or Whit-Ash Furnishings, and almost everything follows the pale wood and light gray palette.

To the right of the living area is the master suite, where that coveted, different, and a bit larger, light fixture hangs. The lighting came from The Nest in downtown Columbia and the Browns were delighted with their guidance. The en suite has clean lines, a gorgeous shower and two walk-in closets. Toward the lake, windows show off the water view and a door opens to the outdoor deck and porch.

“I wasn’t convinced the door was necessary, but we’ve used it many times since we moved in,” she said. “It’s handy to step in for a sweater or enter our private area.”

The left side of the living area flows into the kitchen. The transition is seamless, assisted by walls painted Agreeable Gray, an appealing color from Sherwin Williams. The counters are Sea Glass Quartz, adding a bit of clean sparkle, especially in the island, where a large sink faces the living room. Where are the items needed to keep the kitchen running? In a dream pantry that’s not too large, but plenty big enough, with open shelving and pantry items lined up for instant access. “If the kids want a certain brand of cereal, we know immediately if it’s on the shelves,” Nicole says. Easy for shopping lists as well.

Appliances and serving platters have their appointed storage places, too. “I have places for my cutting boards and everything else in the kitchen,” Nicole says. “I wasn’t sure I needed all smart appliances, but I’ve grown used to saying ‘Alexa, fill my bowl,’ and watching It happen.” Scott Walter did a lot of the design work for that area.

Step outside onto a second-floor porch and deck that overlooks the backyard and the lake.  There’s no access to the yard and they altered their plans to do away with steps.  “We realized no stairs would give the dogs access to see outdoors but not escape into the outdoors,” Nicole said.  “As soon as we moved in, we realized that we liked the privacy almost as much as the dogs did.” The ceiling fan is unique, another find from The Nest.  Nicole says it puts out an amazing amount of breeze, especially during warm summer nights. Decking leads across the back of the home to the couple’s master bedroom door.

Downstairs is Nicole’s favorite piece in the home. The stairs descend to the playroom and a beautiful bar made from a 1940s Chris Craft boat bar designed by Harper Boat Sales and Restoration out of North Carolina. It’s polished to a high sheen and will eventually have a sign identifying its Lake Murray mooring – perfect for hanging around during halftime. The entire area is still a work in progress, but already quite popular with all ages. Easy access to the backyard and lake happens here, via glass doors. 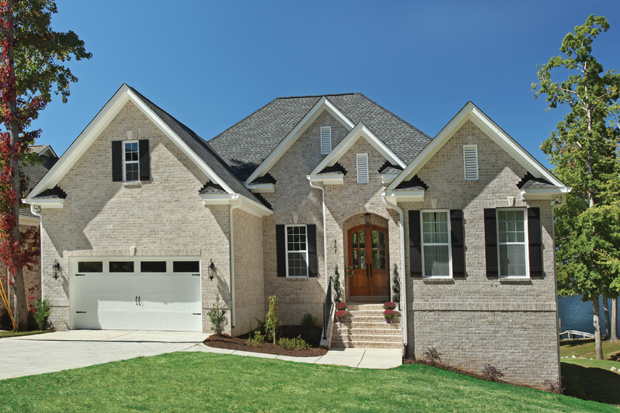 And what’s easy to exit is equally easy to enter. One side features a guest bedroom and bath, and on the other side, son Michael’s room, another guest room and a bath in between. There’s plenty of room for son Dillon to come home and visit. Behind the stairs is family storage and a hidden doggie shower after those impromptu swims and sand-rolling escapades. There are two garages – one on the side and another on the main level for their vehicles.

When they’re truly empty nesters and a bit older the downstairs could be closed off, but that’s highly doubtful for many years – it’s too appealing.

Will they move again? Hard to say, because anything can happen. But for now, this feels like a forever home. “We’ve put down roots and met good friends and this feels uniquely ours,” Nicole said. “We’re very satisfied in this little corner of Lake Murray, and with much thanks to all who helped, both of us are happy in our perfectly traditional, minimalist home.”