They love older homes, but like their creature comforts and updated style. This couple got all that and so much more. 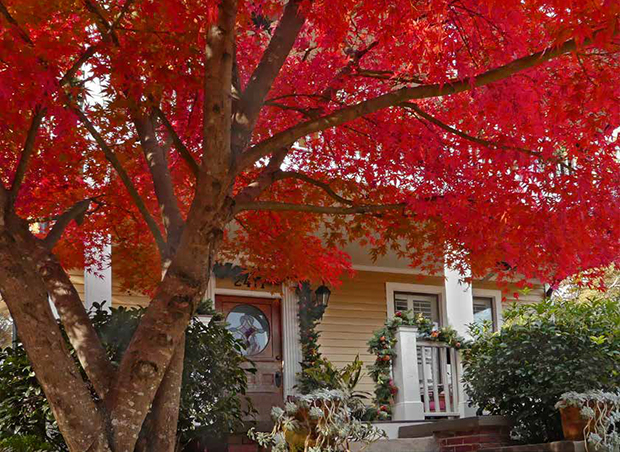 Built in 1910 and renovated at various times by different owners, this home in historic Elmwood Park ticked all their house boxes. Debi Schadel and her life partner, Derek Riley, knew almost instantly that this was the house for them.

“Derek and I had renovated our last home in Old Shandon ourselves, and we didn’t want to go through that process again,” Debi said. “We wanted another older home because the materials and attention to detail are topnotch. We didn’t want to have to get down to the studs and redo electric and plumbing.

Lucky for us, the friends who sold us the home had done all that and more.”

Former owners Tim Gardner, proprietor of Lula Drake Wine Parlour, and his wife, Lorie, CEO of Mad Monkey, had upgraded the necessities while leaving the bones intact. What was left for Debi and Derek were cosmetics, even as they made the pleasant adjustment to living in one of the oldest neighborhoods in Columbia.

“We got the great bones of an older home, but with modern windows that matched the aesthetic of the neighborhood,” she said. Another plus was what Debi called “a perfect blend of social front porches and private back yards.” It’s a great neighborhood for gathering, and even though it’s only a few blocks from Main Street, it feels tucked away and neighborly. They had been house hunting for four years but knew it would be their home in five minutes. They moved into the house in July 2017. “We decided so quickly, and we were lucky to have some great neighbors,” she said. “The year we moved in, we hosted a block party because we already had seen six new homeowners move in.”

“We enjoy monthly neighborhood porch parties and family-friendly street parties,” she said. It’s also a perfect location for stepping out to favorite haunts, including Vino Garage’s outdoor patio and The NOMA Warehouse with its live bands. “Have you had the pizza at Il Focolare?” Debi asked. “Also, a nice fire in the backyard of The War Mouth is a great way to spend a weeknight.”

It’s a super location to venture out from, but the home invites a lot of staying in time as well. Debi is co-founder of Flock and Rally, an integrated communications and marketing agency and native of upstate New York, while Derek is a business analyst with OLH Inc., a road design and construction consulting firm. He’s a Columbia native who earned a Civil Engineering degree at Georgia Tech and returned home soon after.

“I knew I wanted to get away from the cold, and I visited a bunch of southern cities,” Debi said.

“Everyone I met in Columbia was so welcoming and showed how much they truly loved living here. At the time, I was going to commit to six months, but 25+ years later, I’m still here.”

And they are both loving having projects they can tackle, one room at a time. So far, they’ve renovated a half bath and the dining room. They have a plan but intend to take it slow.

The front porch is inviting. The entry foyer offers a stairway, and to the right, the parlor. 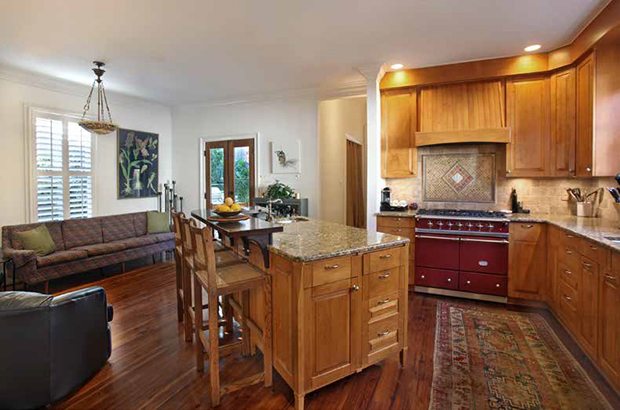 Cozy and comfortable, the entry and parlor showcase some of the couple’s extensive artwork. An Anna Redwine painting from if ART Gallery is the first thing you see upon entering.

There’s a wraparound sofa and one of two gas fireplaces. “I feel at home and at peace here,” she said.

A doorway leads to the dining room, with high wainscoting and a nook for Derek’s turntable and 900+ record albums. The former owners took the walls down to the studs, and in addition to new plumbing and electric, they added a hard-wired speaker system throughout the entire house – the better to enjoy all those vintage LPs. The mid-century walnut dining table can expand to seat eight. “I used to refinish furniture, and this is one of the pieces I did,” Debi said.

To the left is a small TV room with a half bath which she has renovated. “I tried all sorts of wallpaper companies but really fell in love with Timorous Beasties, a small Scottish company,” she said. More art adorns the walls, including a piece by Tyrone Geter. “I thought I would miss an open floor plan, but the distinct spaces in the house create different vignettes for us to enjoy.”

Just beyond the dining room is the kitchen. It’s the width of the house with a seating area to stay close to the cook. The island is striking and positioned at an angle to take in nearby rooms. The Lacanche stove is the centerpiece – one-half gas and one-half electric. It’s massive and beautifully versatile.

There’s a door to an outside kitchen and dining area, but first, the wine cellar beckoned. “I never thought we could fill up a 500-bottle wine cellar,” Debi said. “We probably have the biggest private $15 bottle collection in Columbia!”

A short hallway leads past the wine cellar and storage (including a temperature-controlled attic in the newer section) to the master bedroom. Light-filled and with high ceilings, the room was added on, including the creature comforts 1920s Columbians couldn’t imagine. To the right are the dressing area and bathroom (she loves the added touches installed by the last owners, including cut-off timers on the bathroom moisture exhaust fans).

A bedroom door leads to the pool, fountain, and lush greenery. It’s very private and peaceful. Debi enjoys having the ability to awake and be ten steps from a dip in the pool or perhaps a morning coffee in the hot tub. The outdoor fireplace and seating area are richly inviting, and the outdoor kitchen leads back into the indoor kitchen seating area. These are just a few of her favorite things.

“Jennifer Denslow of Fine Gardening created our raised shade garden behind the outdoor kitchen, and we are so pleased with it,” Debi said. “She did a fabulous job of understanding what I could and could not care for. After just one winter, everything came back twofold.”

Upstairs are two more bedrooms and a full bath, plus another master suite with an en-suite bath and a door to the upstairs porch overlooking the street and mature treetops. They enjoy sitting out there – especially during a rainstorm.

What else has brought them unexpected pleasure? An outdoor fire after a dip in the pool and easy access to the outdoor grill and kitchen, among many other spots. Debi says the previous owners took such care in designing this home’s renovations and additions that they are simply hoping to maintain what’s been done and invite others over to enjoy it.

Their five-year plan, in order, includes finishing the side yard/hot tub area to allow a separation of their utilities from the lounge area; modernizing the kitchen with new tile and countertops and maybe a banquette; and renovating the upstairs rooms.

All things will come slowly and with careful planning and creativity.

There are two more inhabitants of the home who love roaming the neighborhood. Cats Alex and Sadie have made their own friends and visit them during the daytime hours.

“Since moving here, we’ve recognized that the thoughtful features of a well-designed home and yard can really affect our mood and help us relax,” Debi said. “It’s surprising how many more caftans I have been inspired to purchase!”